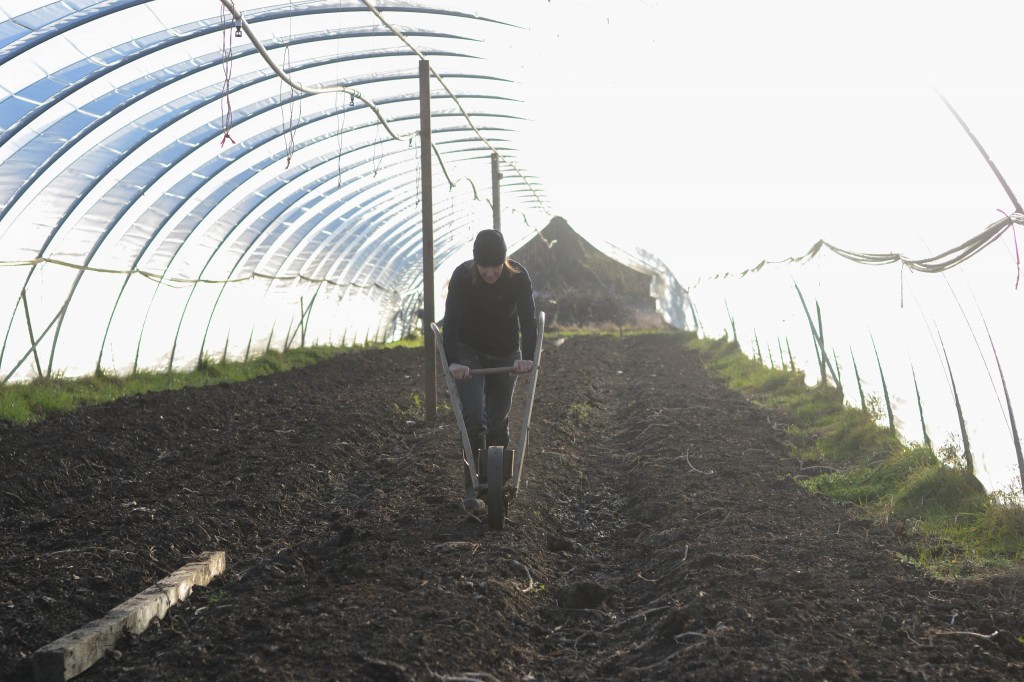 While agribusiness may rely heavily on cutting edge technology and precision machines, Gathering Together Farm is in a lot of ways old school, using tools and techniques known to farmers for centuries. Joelene’s method of direct seeding in greenhouses showcases a couple of traditional practices that hold their own on our small-ag farm.

Starting back in December, Jolene began the monumental task of scheduling WHAT was going to be planted in WHICH greenhouse (There are no less than 38 of them now) and WHEN. She has a database of greenhouses and their rotation histories that she’s made into a large board with vegetable/fruit-name magnets that she can manipulate into different configurations to help her visually organize her ideas.

Because the GTF greenhouses come in a wide variety of sizes and shapes and each has a different history, she can only plant certain crops in certain houses.  Some greenhouses will be planted with short season greens that will have time to produce and harvest before the ground needs to be prepped for later season greenhouse needs. Some will get early tomatoes and when they’re done, she’ll put in fall/winter crops, quick-to-mature greens, etc.

The preparation for each greenhouse varies also. Some need extra nutrients in the form of gypsum or chicken/rabbit compost. Most are tilled with a small tractor, and then beds are prepared by hand. Greenhouses that will be planted to heat-loving crops will get plastic mulch on the ground, and tomatoes and cucumbers also need trellising. Drip and/or overhead irrigation is already set up in most of the houses, but it often needs a little rerigging or upgrading before it can service young plants appropriately. 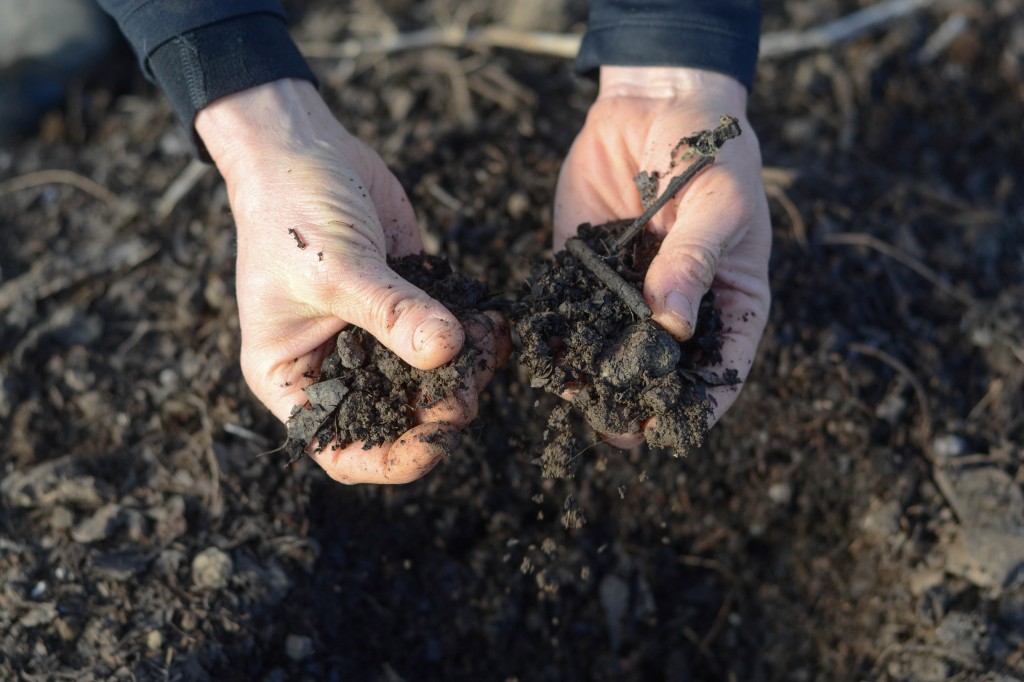 Not long after Joelene finalized her full greenhouse rotation schedule and had direct seeded the first few greenhouses, catastrophic flooding hit the farm. When the Marys River receded, greenhouses were left extremely wet and muddy, and most of what was planted had washed away. The high waters also threw a monkey wrench into Joelene’s tightly scheduled plan for greenhouse planting. Joelene took it all in stride, and she made a series of small decisions that will make the best of the farm’s conditions and seasonal timing. 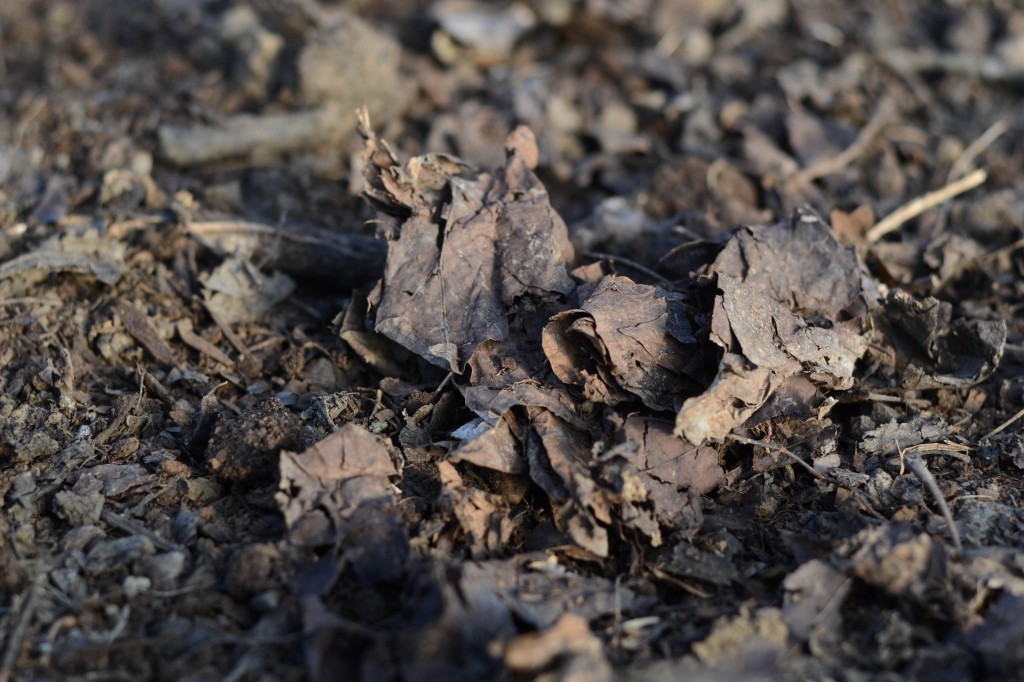 There were four lone greenhouses on the farm that were not flooded, and yesterday Joelene headed out to direct seed one of them. It had previously housed a beautiful potato crop, and after the tubers were pulled, the beds were left intact. While this was convenient because the crew could skip many of the ground preparation rituals, the actual soil was rather chunky and had a top layer of leaf mulch and other organic debris, which were added to enhance soil development. Joelene had planned to plant lettuce for salad mix here, but lettuce germinates best when seeds can be planted almost on top of moist soil. The conditions here just weren’t right because of the rough and dry surface with wet soil only an inch or so below. After deliberating a minute or so, Joelene made a quick switch from lettuce to spinach. This choice meant that she will have to fit in a lettuce planting elsewhere in the next week or so. It also means she’ll have to reconfigure the irrigation in this hoophouse to accomodate three drip irrigation lines per bed instead of overhead watering. 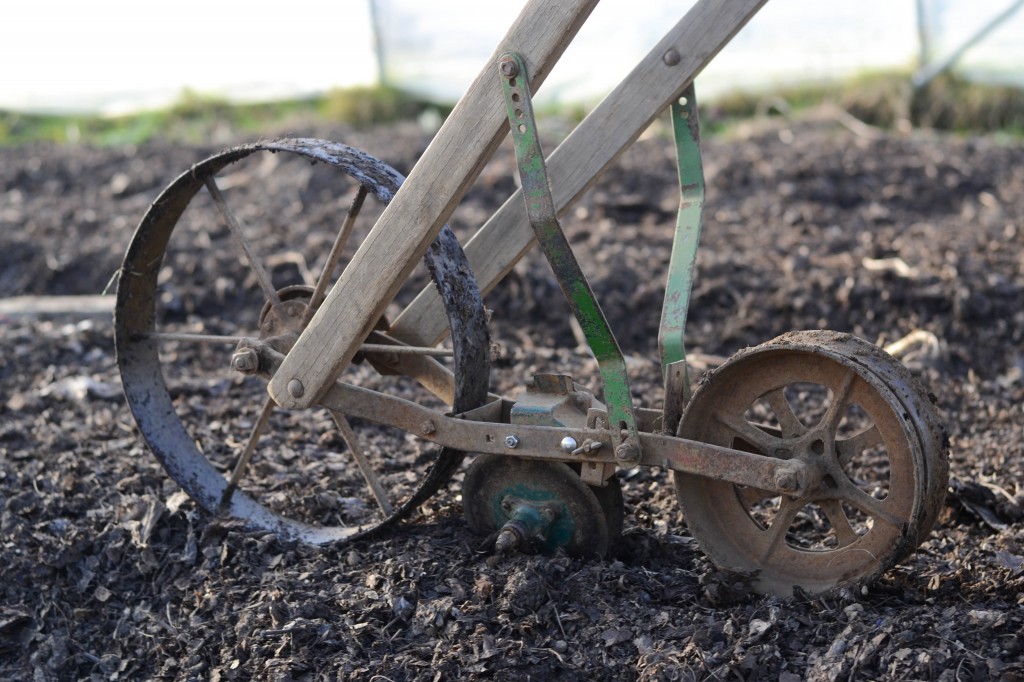 This is Joelene’s seeder. Even though she can drive her seeder tractor into some of the greenhouses, she prefers to direct seed with this relic because she can fit a bigger crop in tighter rows with her push seeder. In this location, she chose to use a disc seeding implement because she thought it would do a better job of cutting into the heavily mulched soil surface. 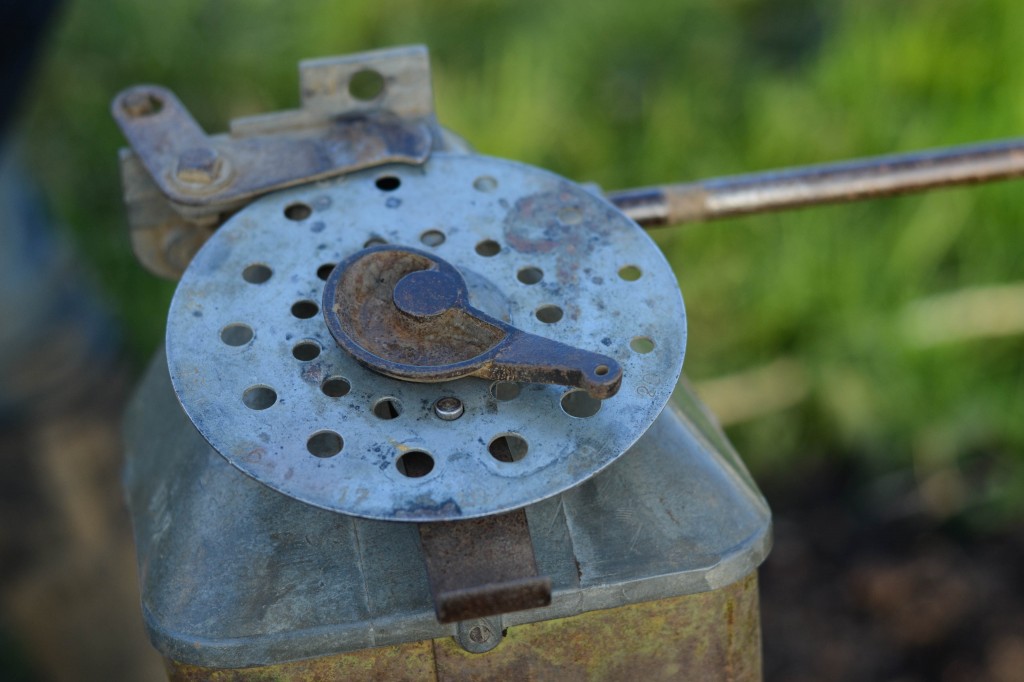 Here’s the bottom of the seeder unit. It has a dial gauge that regulates spacing of seeds. Each crop is seeded at a different setting, but Joelene has a mental catalog of seed sizing and spacing info in her head. 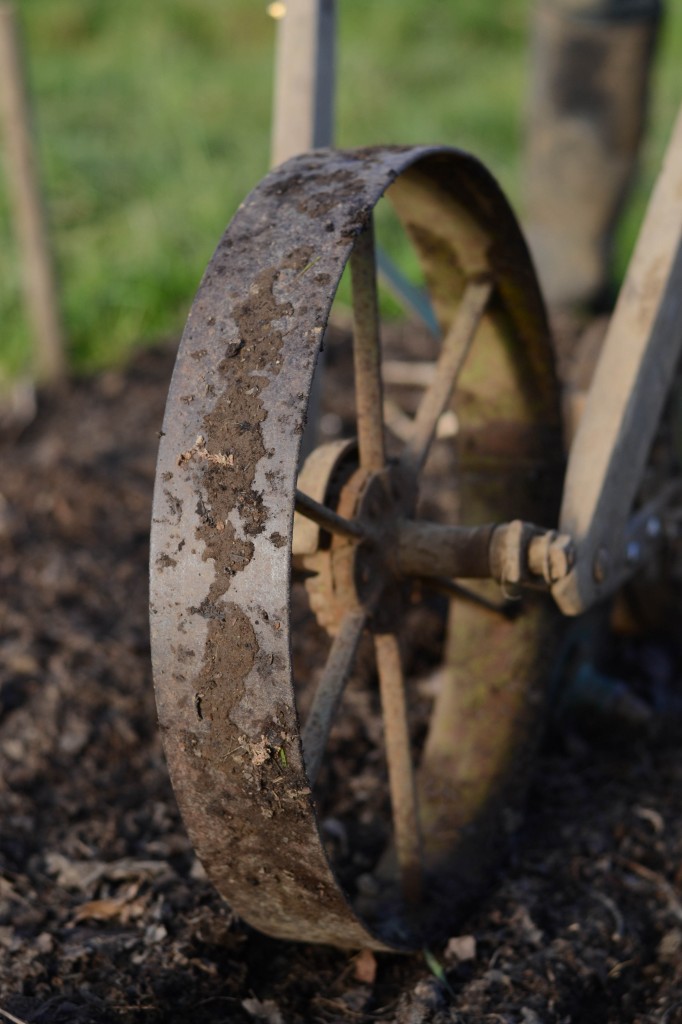 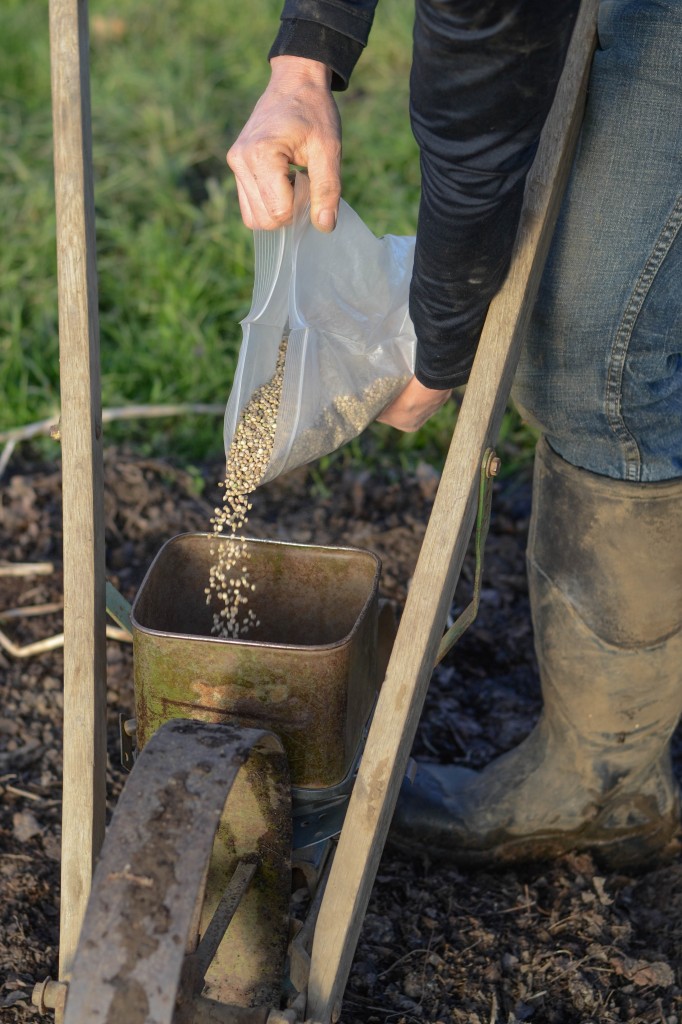 She fills the hopper with spinach seed. 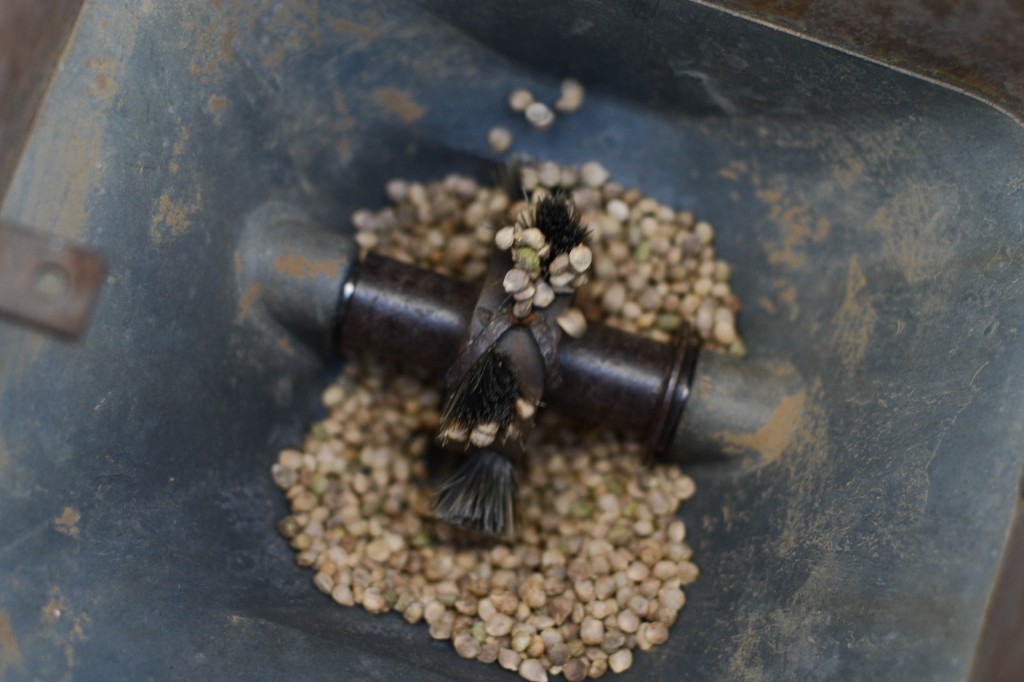 Inside the hopper, brushes sweep seeds out through the disk implement at a set spacing. 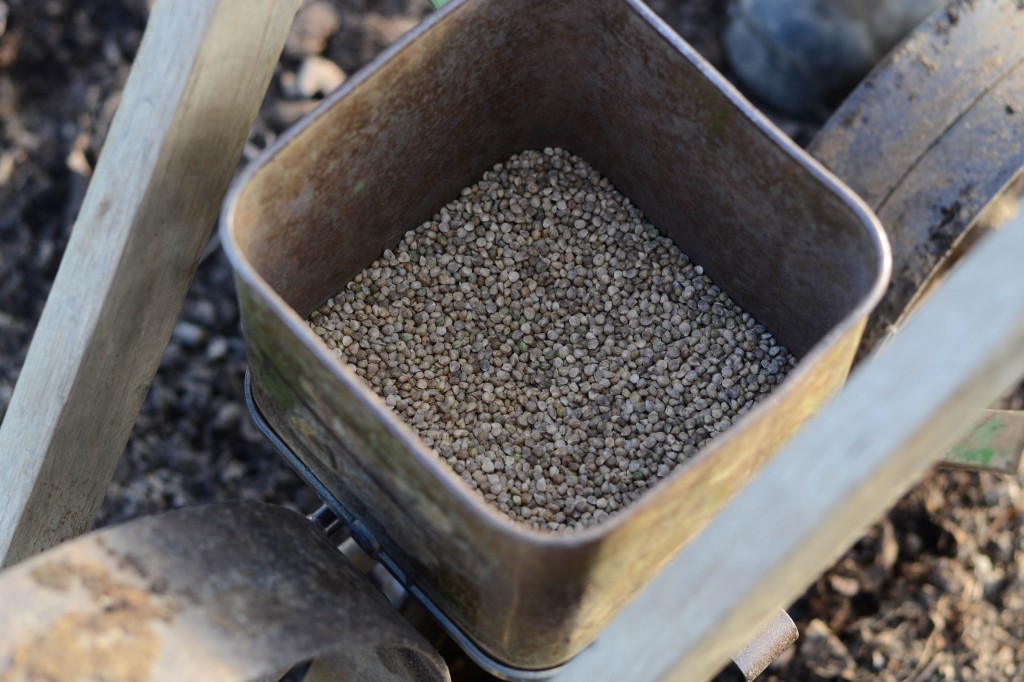 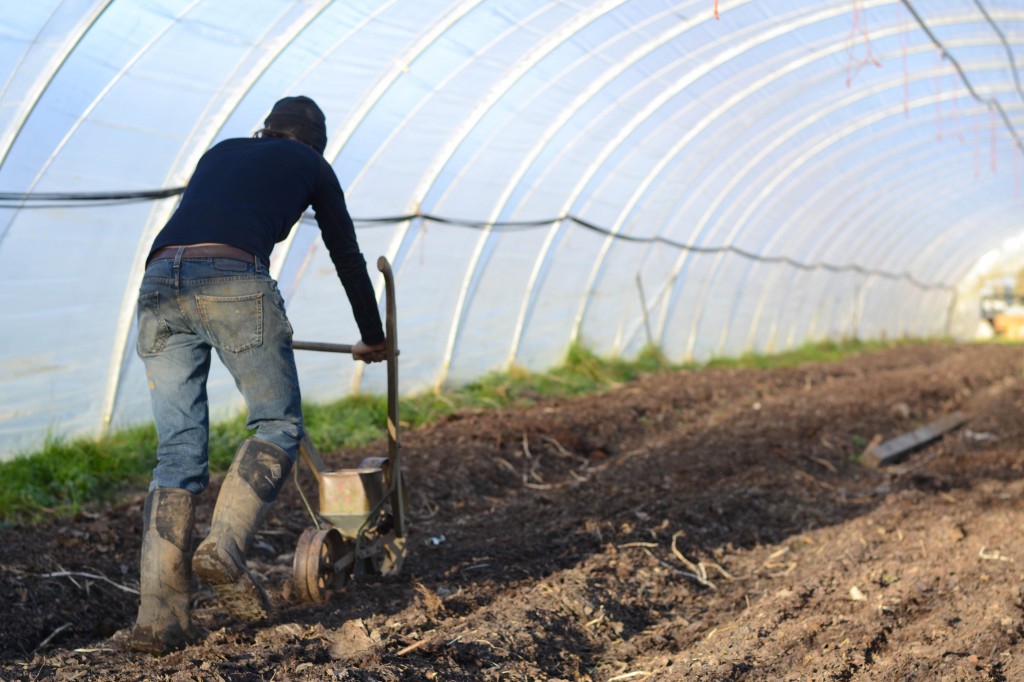 In this case, Joelene not only had to walk up and down the rows 12 times, but in order to get the spinach seeded through the mulch layer, she had to put a good deal of pressure on the seeder frame as she traveled. 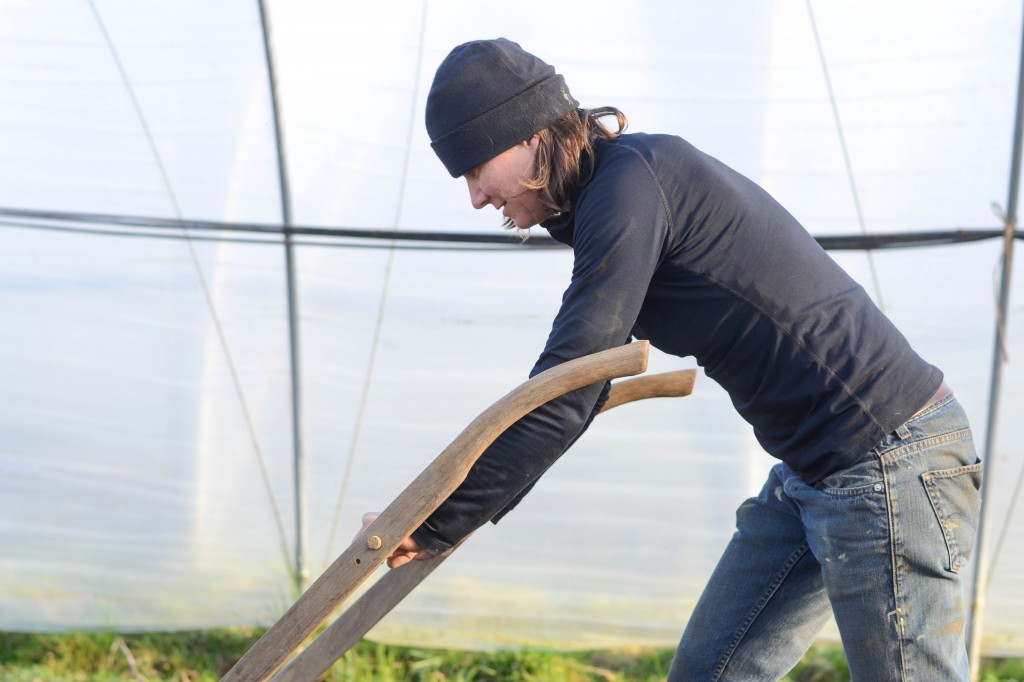 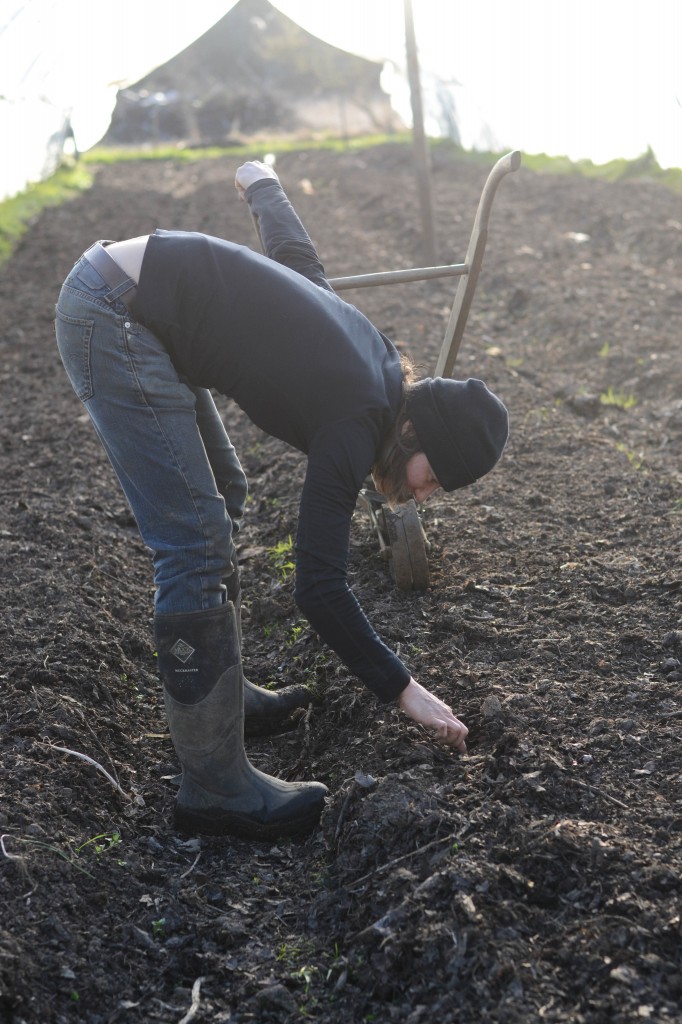 After a quick trial, she checked the spacing, depth, and consistency. 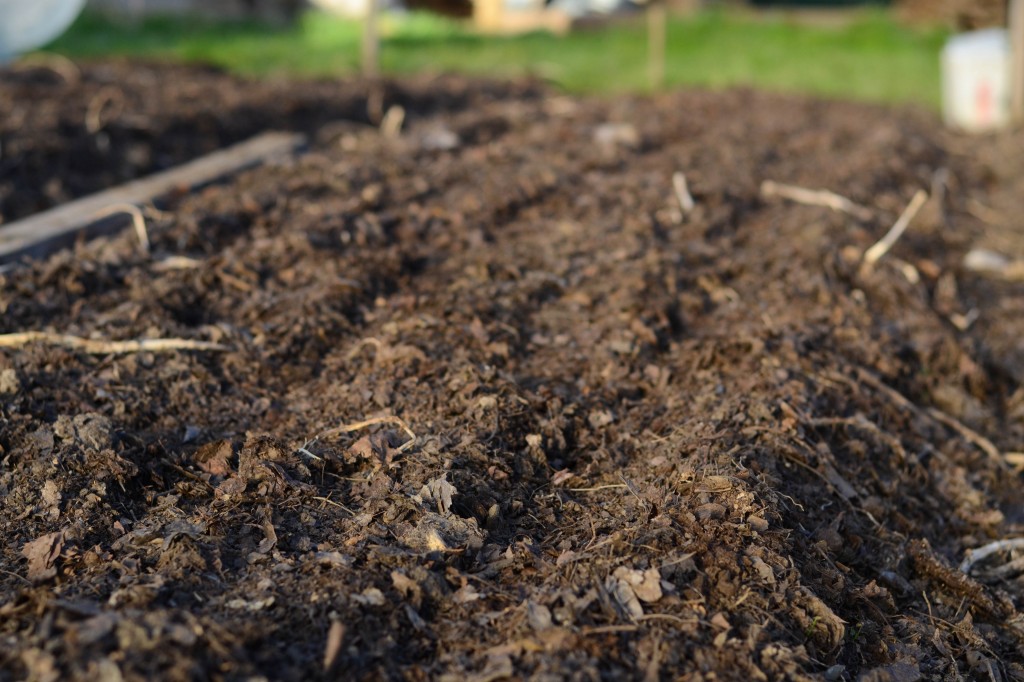 Each of the four beds got three rows of spinach. The seeds were embeded deep enough that they’re not visible anymore. 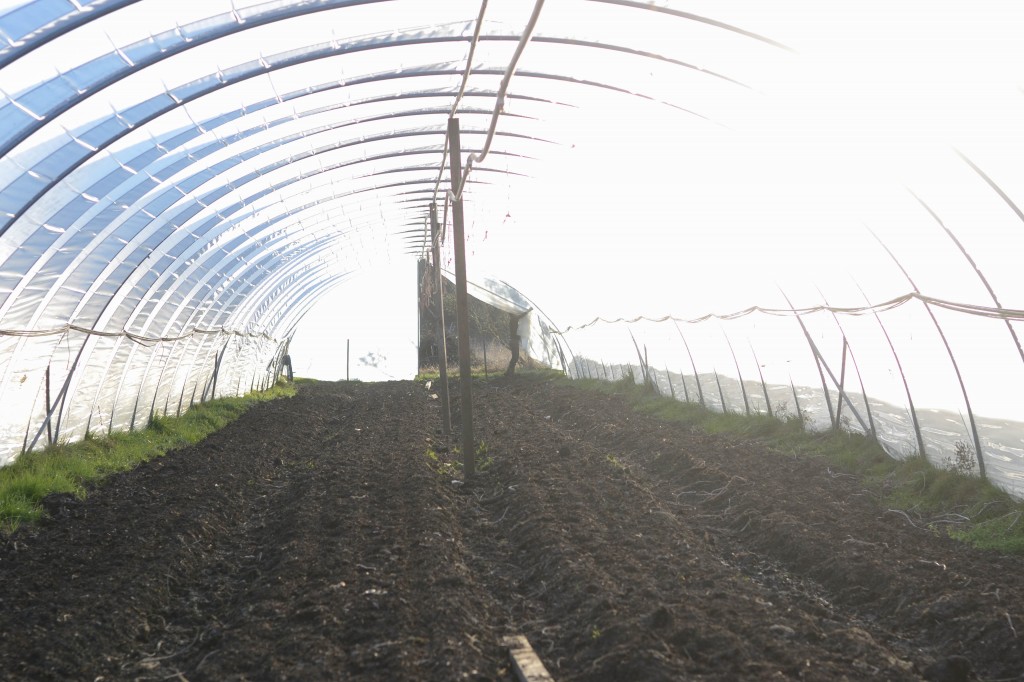 After seeding the whole greenhouse, Joelene tightly shut the door flaps. Today she will go back and cover the beds with floating row cover to add extra heat to the soil. The spinach will be ready for harvest in about two months, and when it’s finished, this greenhouse will get planted with cucumbers in early June.

Without any soil preparations, seeding this greenhouse took about an hour start to finish. There are still over 30 greenhouses to plant in the next few weeks, and many of them will require quite a bit more labor to get them ready. Winter may be a quieter time on the farm, but there is certainly no shortage of work to do.