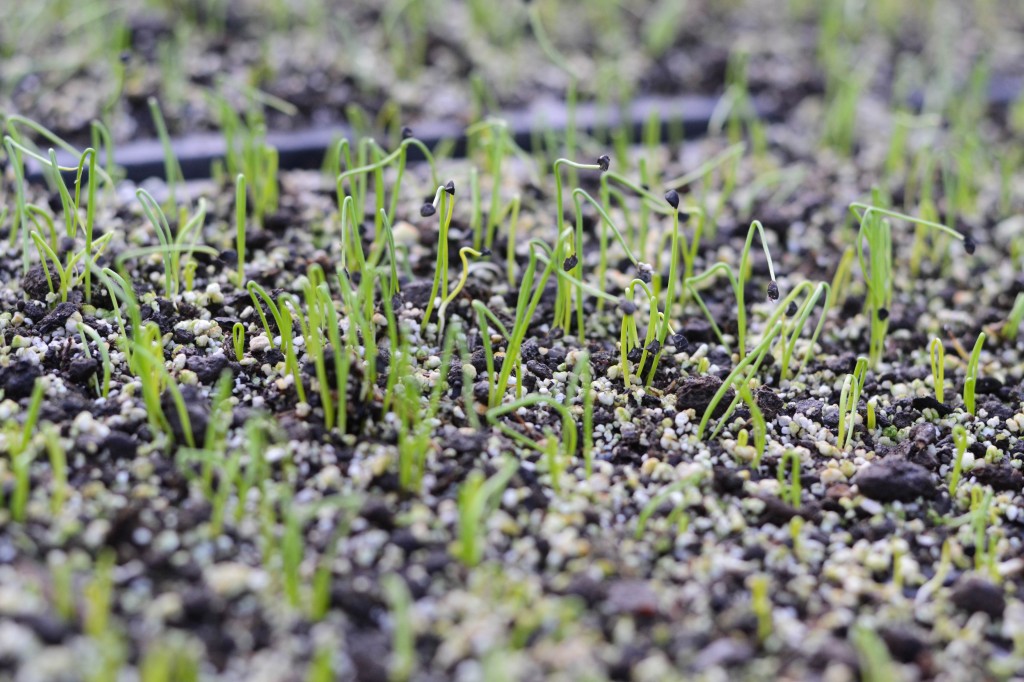 Last week, the propagation greenhouse crew had its annual onion-seeding marathon, 574 flats in three partial workdays with the help of four people. This was the single biggest one-crop planting of the year

Onions are a staple vegetable at the farm, yielding throughout the summer, and storing well into the fall and winter. Gathering Together Farm is growing the following varieties this year (a couple new ones plus tried and true favorites): 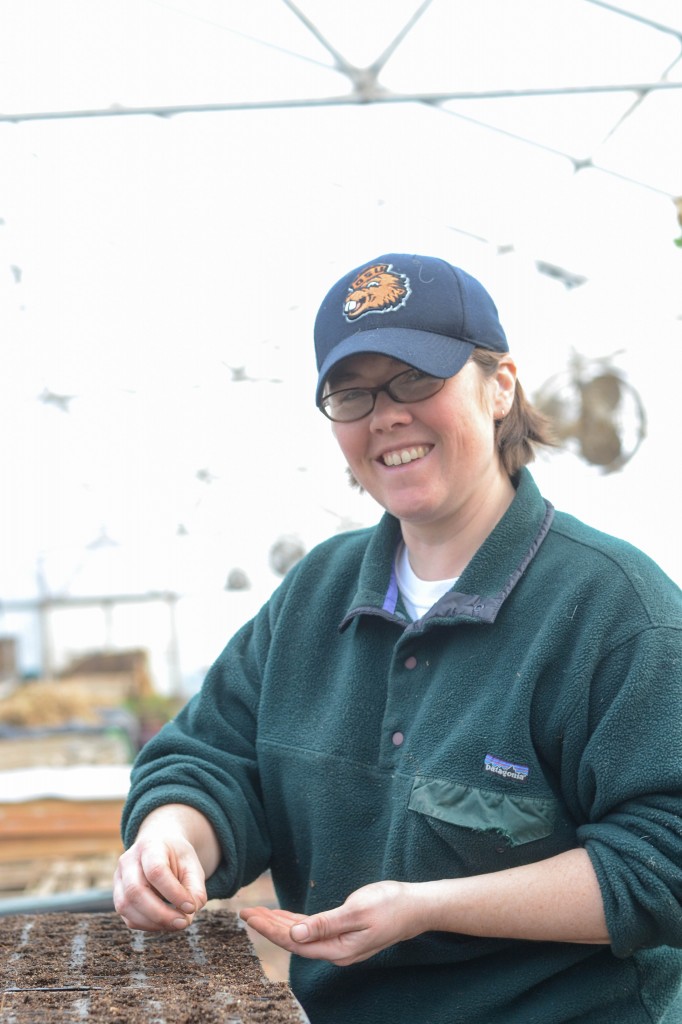 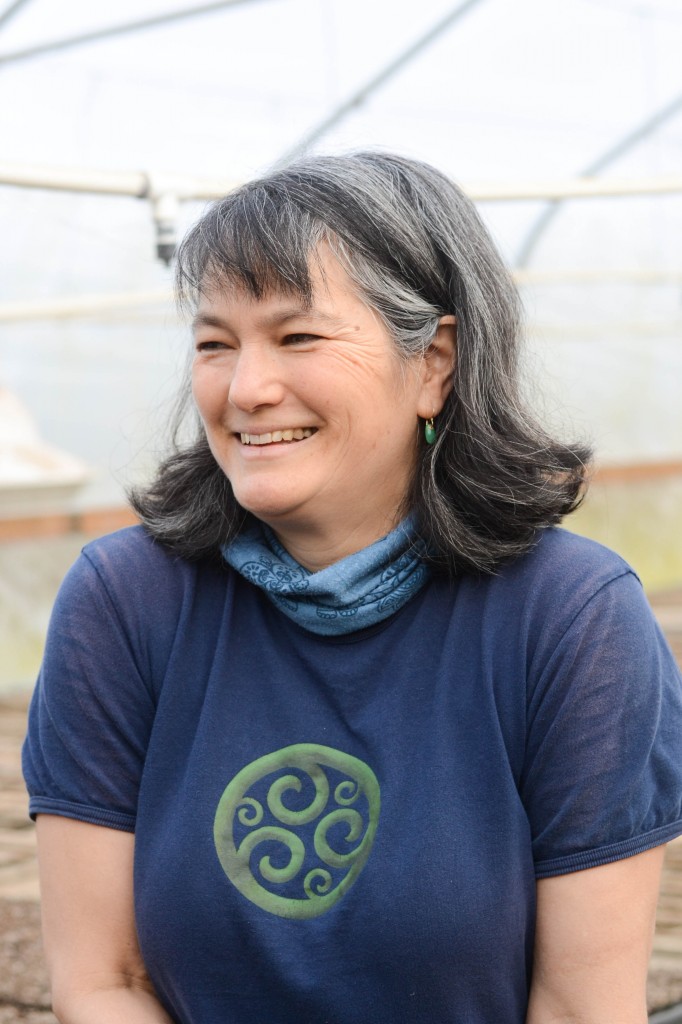 Sarah (above left), Paula (above right), and Leslie (who politely opted not to get her photo taken) do most of the routine seeding and propagation greenhouse upkeep. Joelene schedules all the plantings, investigates any problems with equipment or germination as promptly as possible, and oversees the crew, making sure they have what they need to work effectively and efficiently.

Soil is the foundation for healthy and successful plant starts. The propagation greenhouse crew mixes all the potting soil used for spring and summer seeding and transplanting from scratch. The soil recipe is based on a mix recommended by Eliot Coleman (organic farming proponent). Over the years, the mix has evolved into the farm’s current recipe. 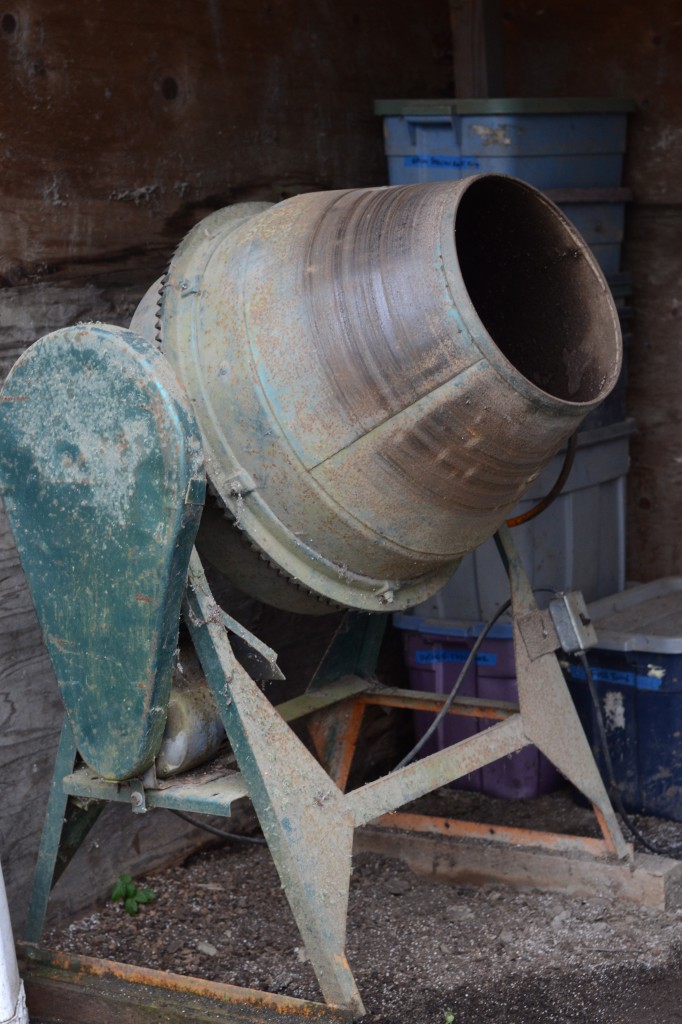 All the ingredients are loaded into the farm’s cement mixer that’s exclusively dedicated to mixing soil. They’re tumbled until they’re evenly distributed. The soil then gets unloaded into a wheelbarrow. 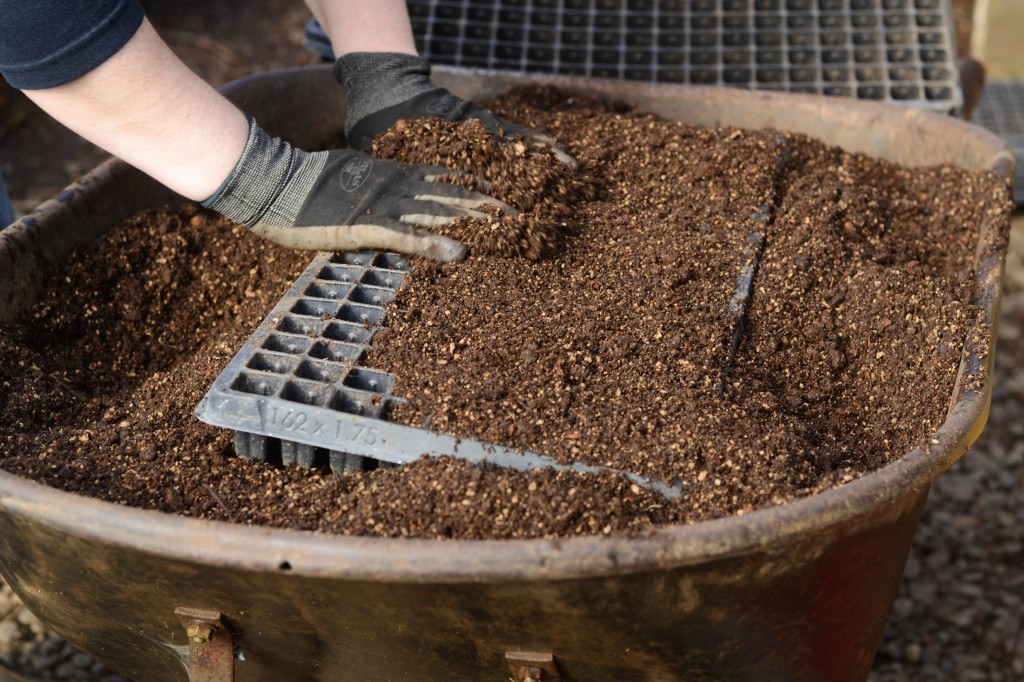 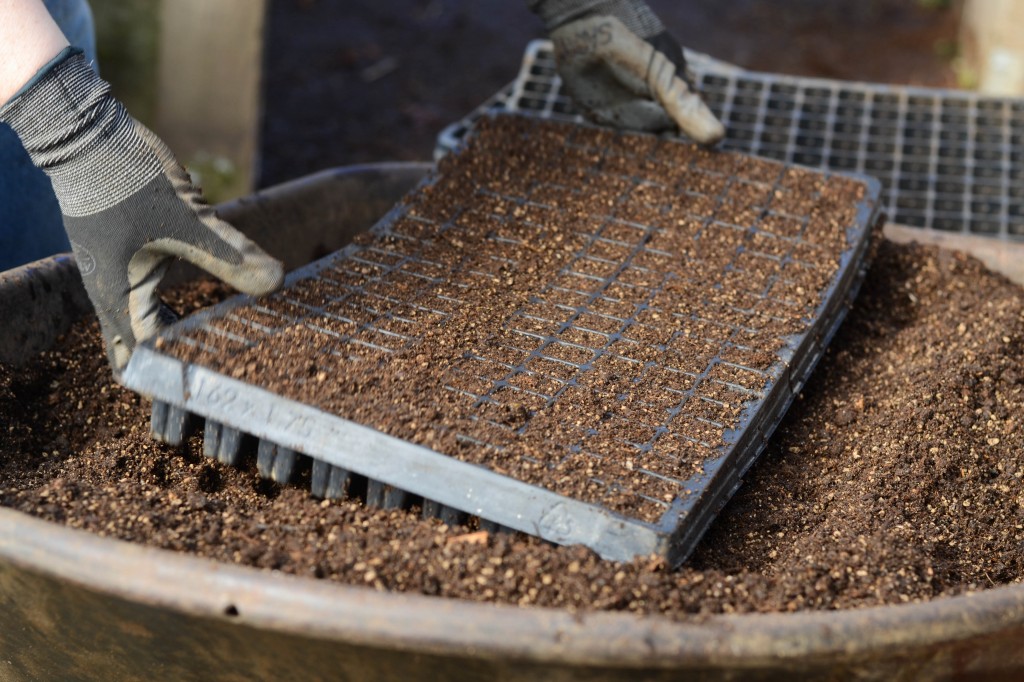 The soil was lightly packed into the flats. 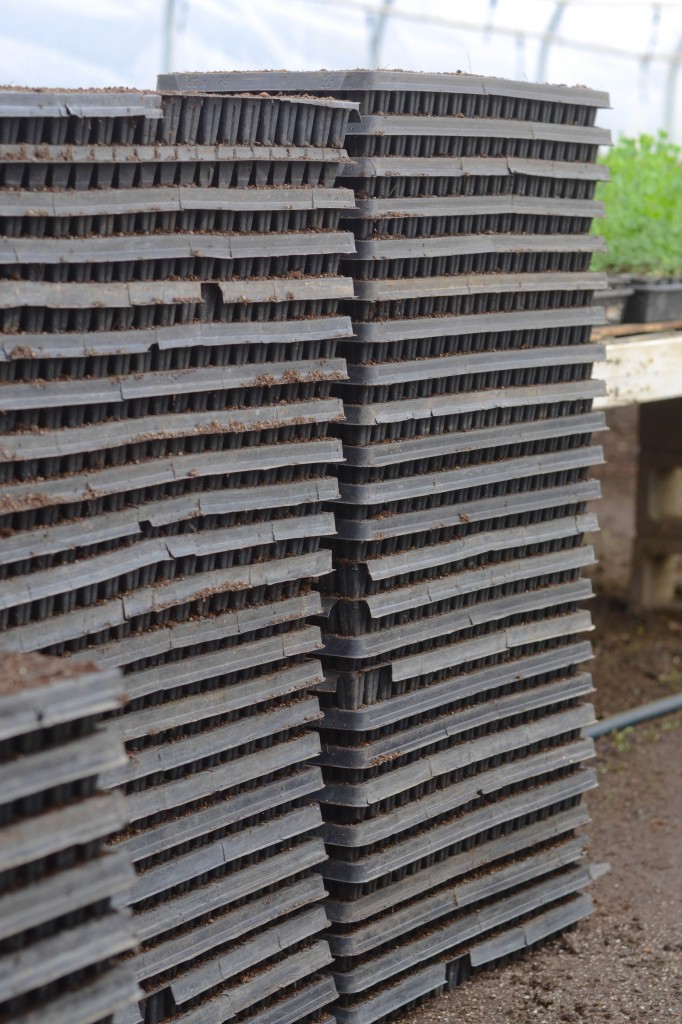 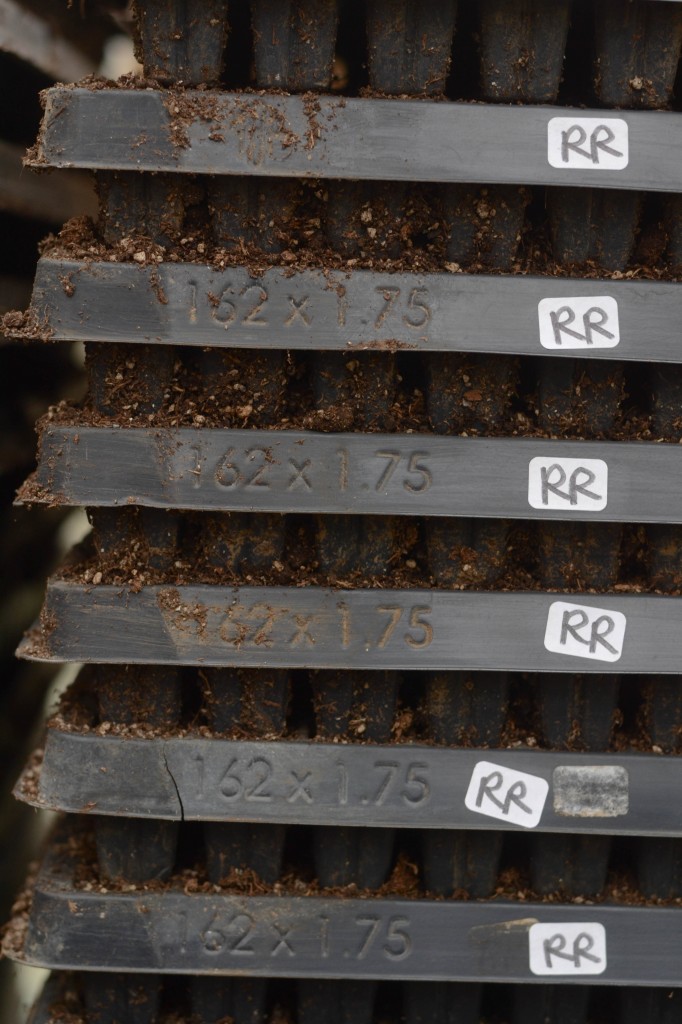 Flats were stacked 20-high so that the soil in each cell got compressed slightly, leaving a depression for the onion seeds. The flats got stickers to mark the variety with which they would be seeded. 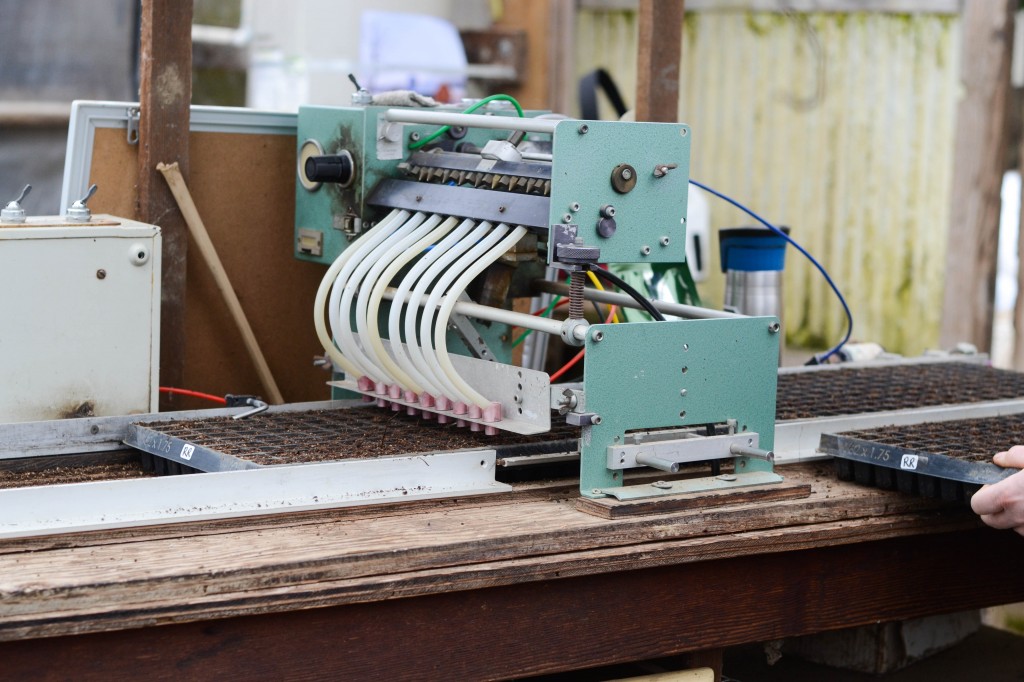 This is the electric seeder. It was purchased used from Peoria Gardens many years ago. Sarah is the primary seeder operator these days, though she “studied” under Joelene’s tutelage. 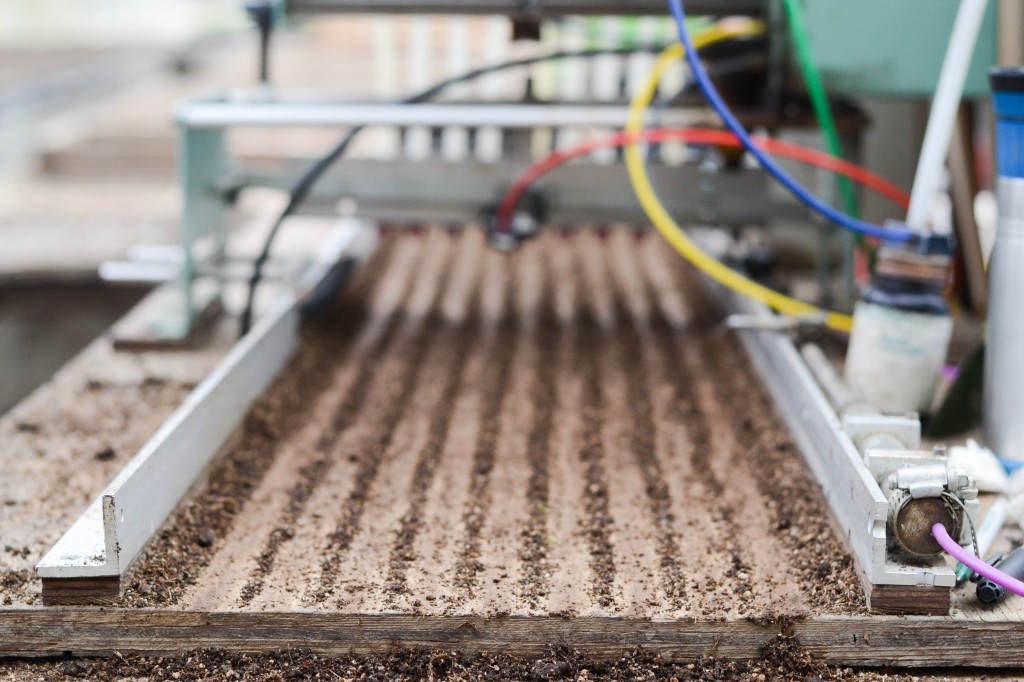 Here’s the base of the seeder. Each flat is manually placed here to start. 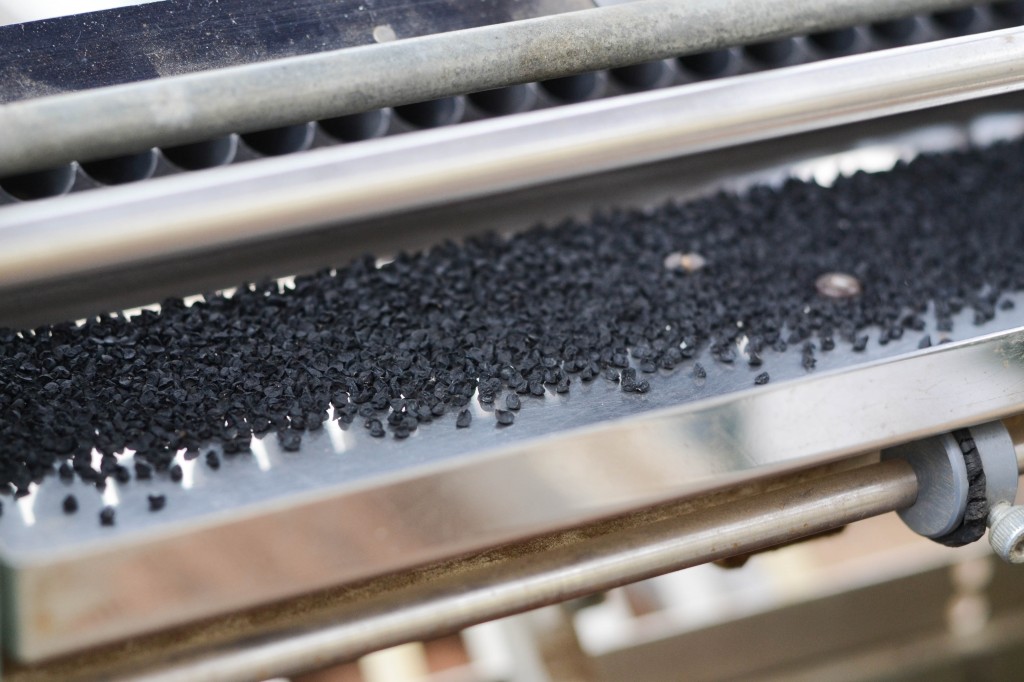 This is the hopper with onion seeds. When it’s turned on, this tray is agitated to get a better distribution of seeds, so they can be sucked up by the  seeder tips. 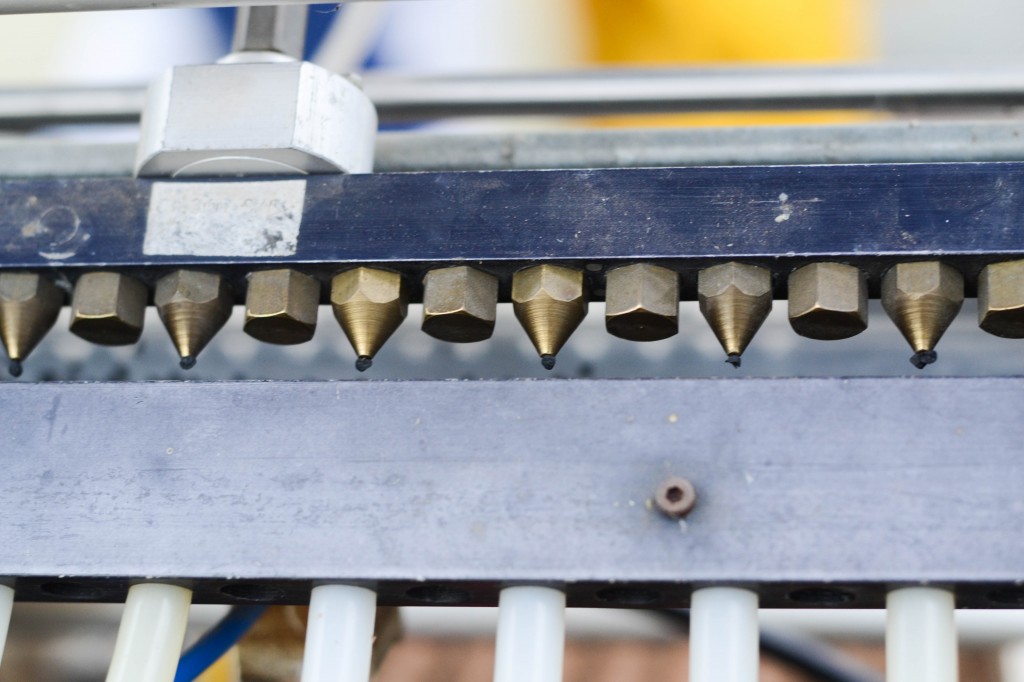 This header with seeder tips rotates down and sucks up at least one seed per tip. (The one on the far right has two.) When it rotates back up, the suction is released, and the seeds fall down the tubes… 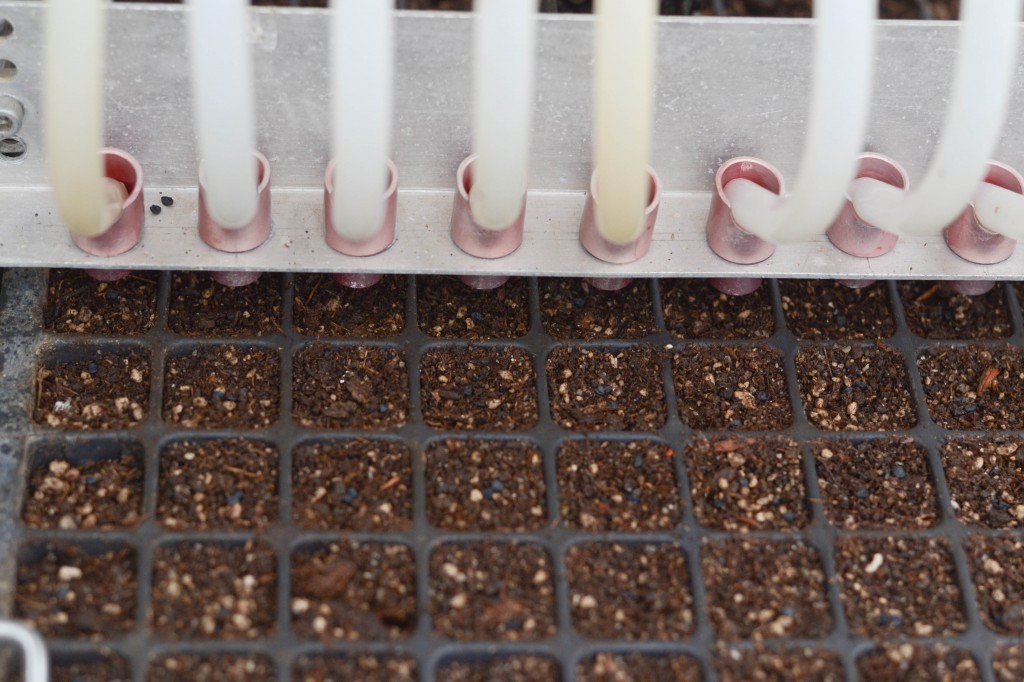 …into individual cells. The tips and tubes can be reconfigured to work with different sized cells, but Gathering Together Farm uses the electric seeder on primarily 162’s. 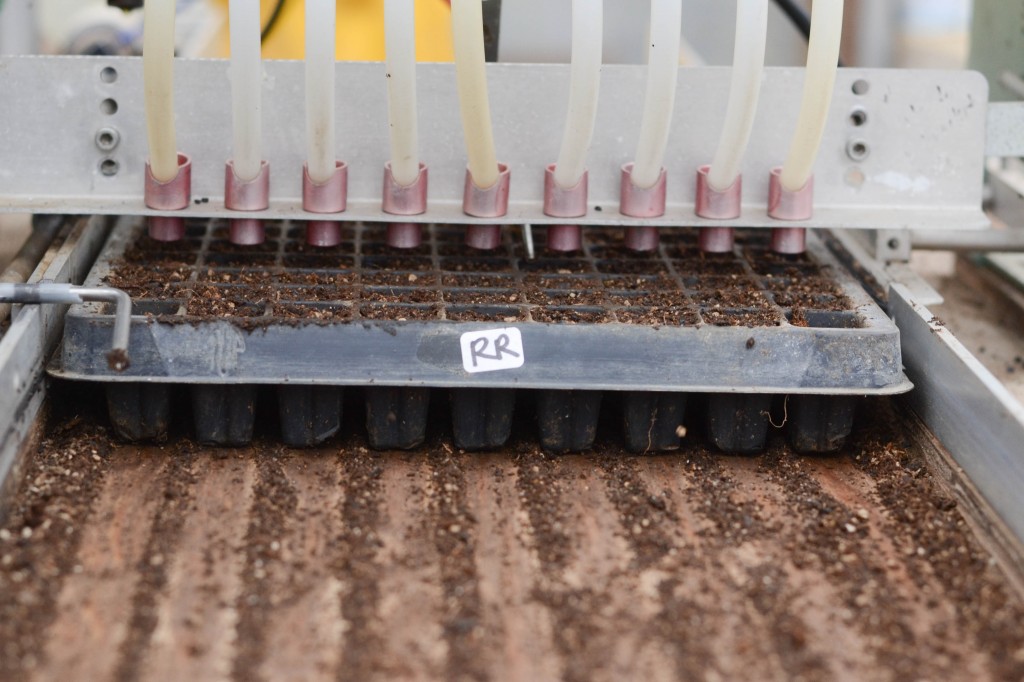 A steady “ca-chunk, ca-chunk” is the soundtrack as the flats move haltingly down the line, stopping briefly for seed deposits in each cell. 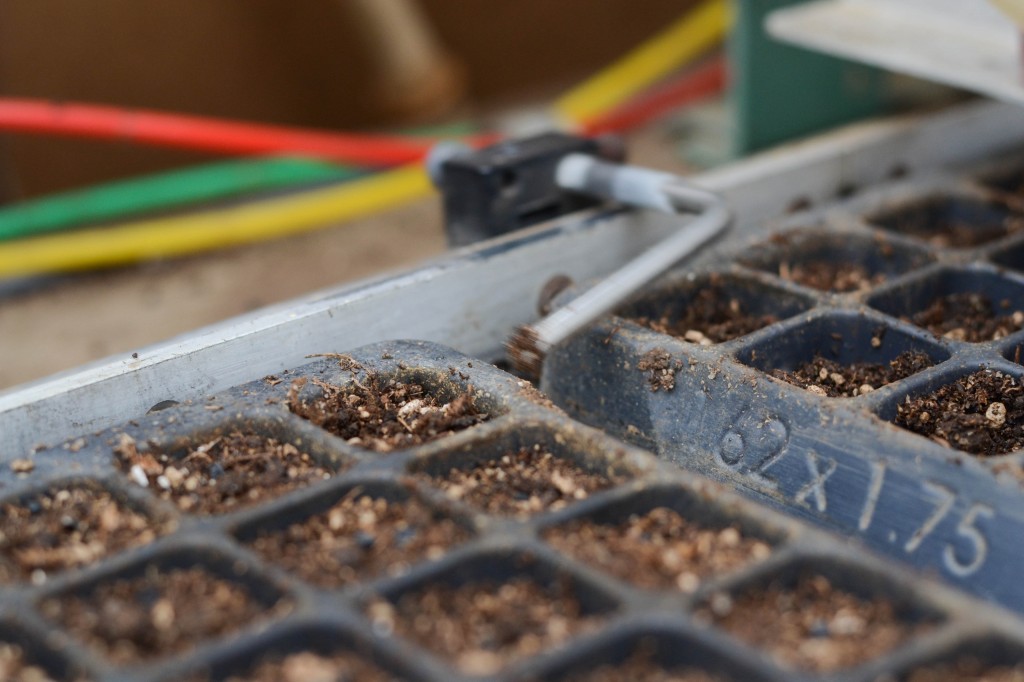 The flats are pushed along automatically by several oscillating arms that give each cell wall a shove down the line. 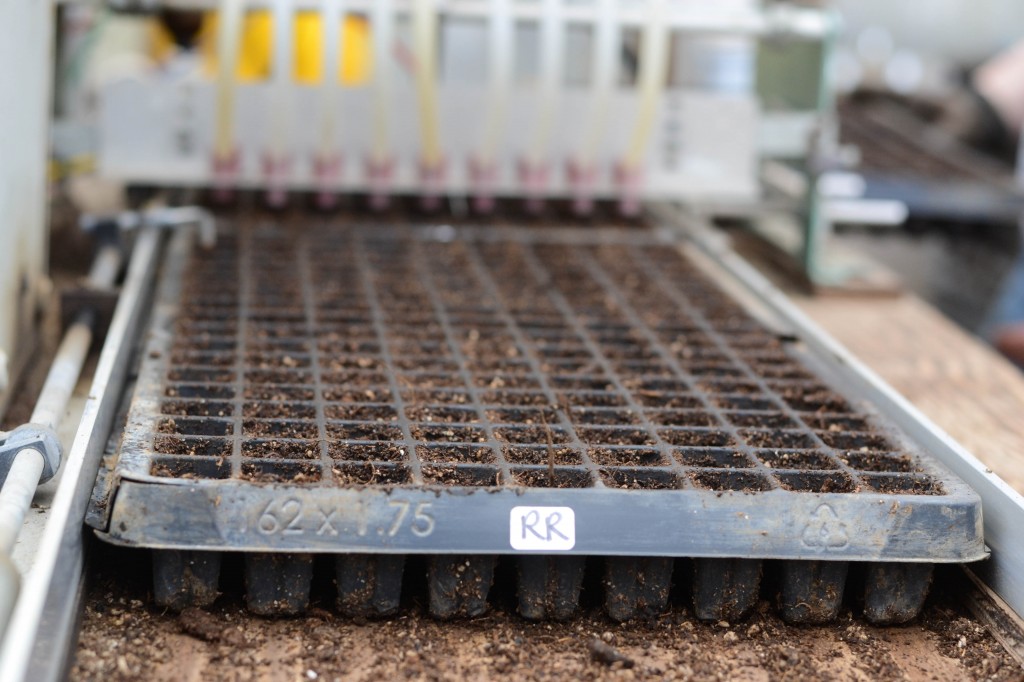 Sarah has to manually grab the flats off the base before they’re pushed off the end onto the ground (which happens on a very rare occasion). 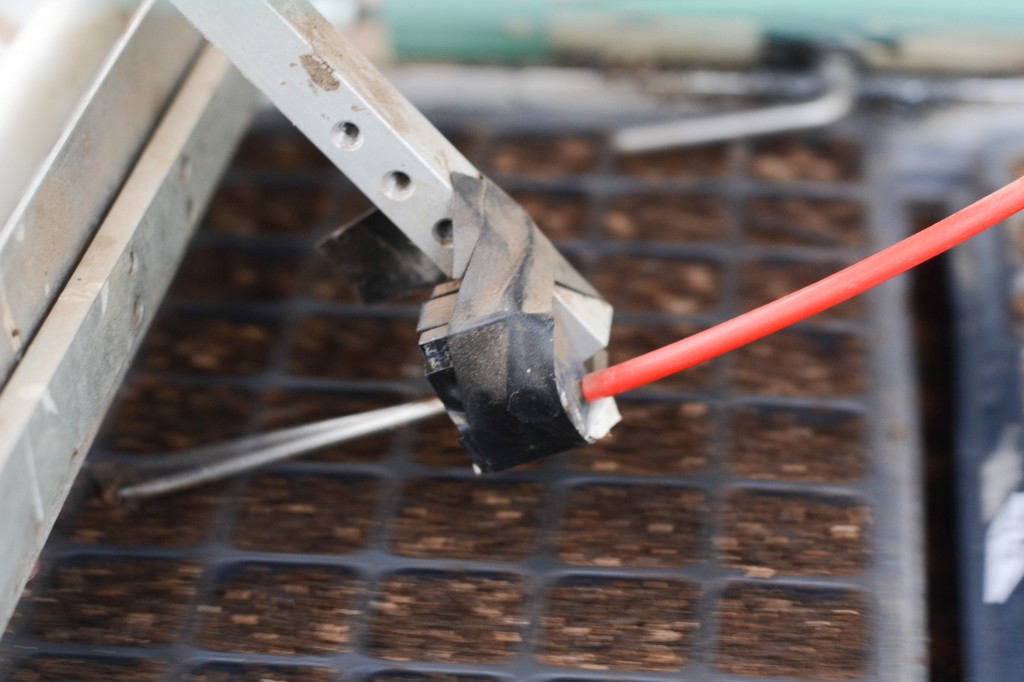 This occupancy gauge signals to the seeder that a tray is passing through, but if it doesn’t sense a flat, it halts the seed dropping mechanism, avoiding major seed losses as things get busy, and Sarah can’t make it back to feed in the next flat fast enough. 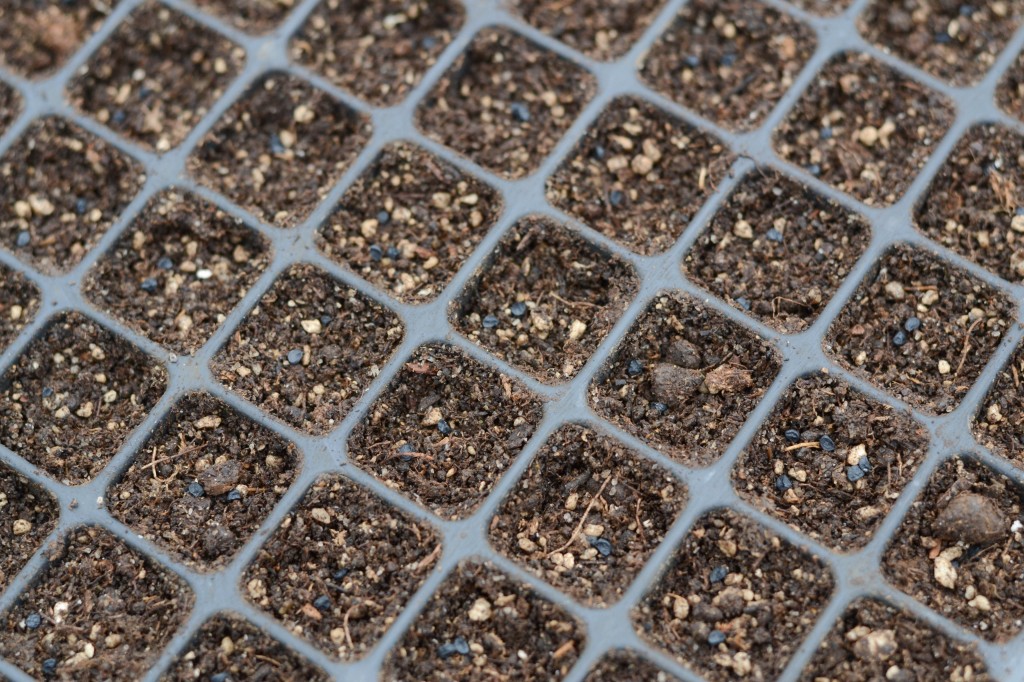 Each tray passes through the seeder twice to ensure that each cell gets at least two seeds. When Sarah is seeding something that she knows has a particularly bad germination rate, she will sometimes send each flat through three times. 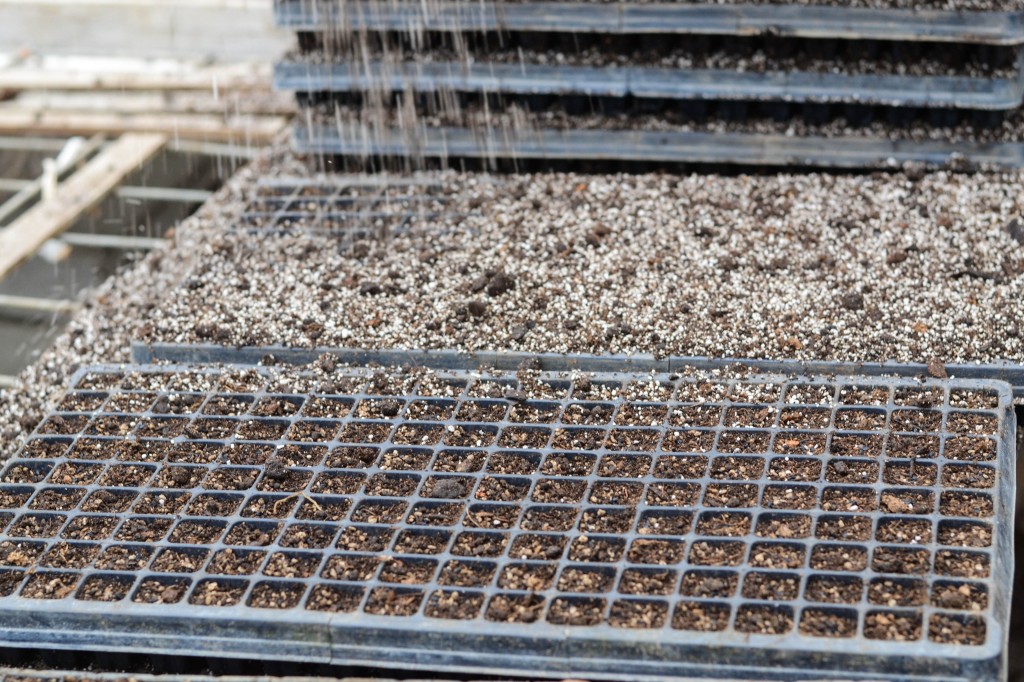 In between loading and unloading flats, adding more seed to the hopper, watching to make sure all the mechanical parts are doing their respective jobs, giving flats an extra shove when necessary, and subconsciously keeping track of how many times each flat has passed through the seeder, Sarah tops off the sown flats with a pumice-rich soil mix.

These flats of onions will spend the next two months in the warmth of the propagation greenhouse. During that time, they will be thinned once, trimmed once, weeded twice (because the compost does have some weed seeds in it), and watered daily. The field crew will transplant them outside in mid April where they’ll need weeding at least once more before harvest (not to mention lots of irrigating).

Expect to see fresh onions at our farmers’ markets and in CSA boxes in late spring/early summer. Until then, we still have some of last season’s storage onions available.