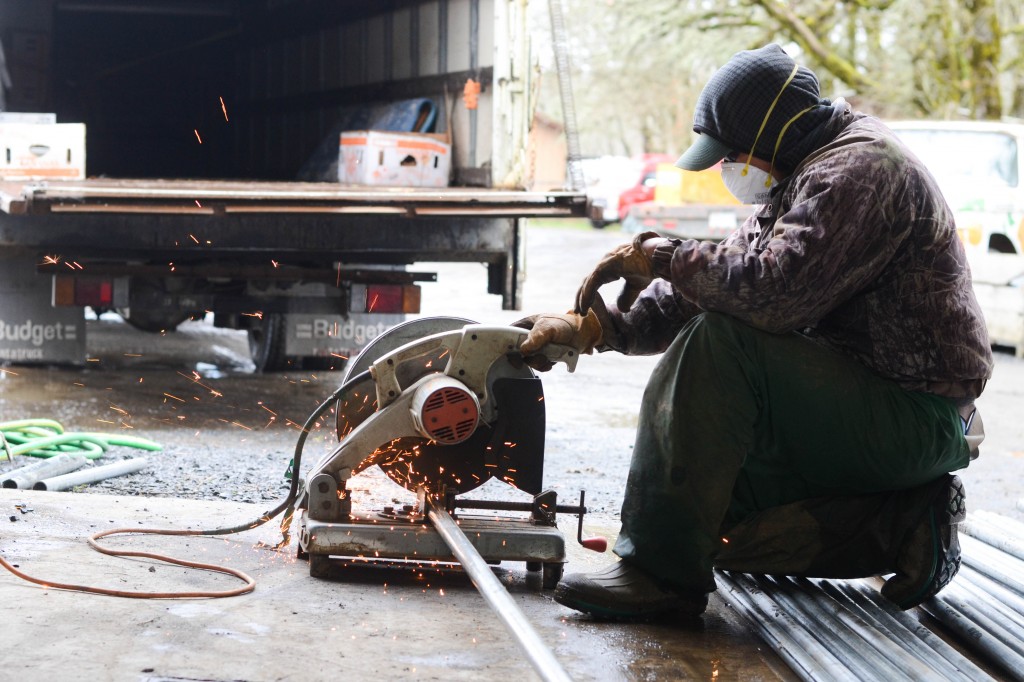 In November, the farm got a shipment of greenhouse poles from a large greenhouse supply wholesaler based in California along with a specialized pipe-bending machine. The crew made enough hoops for the six new greenhouses in about a day of work, and then they shipped the pipe bender back South.

Unfortunately during the snowstorm, a few days before the flood in January, two small existing greenhouse collapsed under the weight of the snow. While some of the materials were salvageable and could be used again, the hoops could no longer serve as hoops. In a rush to get the farm up and running again, the pipe arches that were supposed to be for one of the new greenhouses were used to replace the bent ones in the fallen shelters.

Fortunately, John had ordered a number of extra pipes that had been reserved for use as straight sections along the peaks or as horizontal supports along the sides of new greenhouses. Sections from the fallen greenhouse could be substituted for those purposes, but the long straight pipes still needed to be bent into hoops. 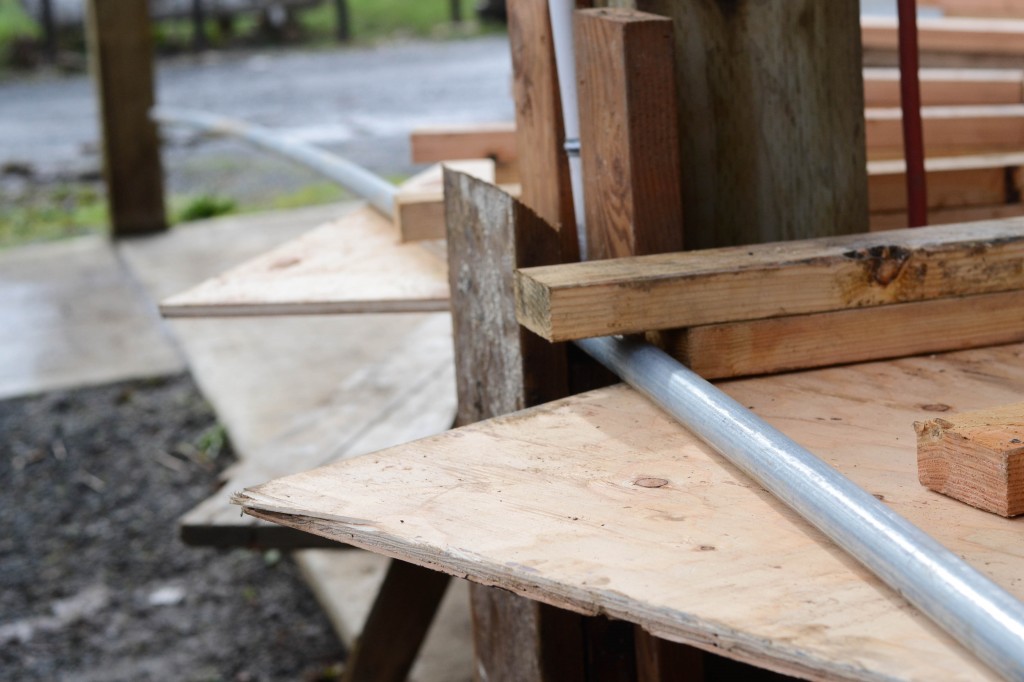 Shipping the pipe bender up from California and then back down in order to bend 40 hoops seemed prohibitively expensive, so John (co-owner), Rodrigo (crew foreman), and various other crew members devised a makeshift mold out of plywood and 2 x 4’s left over from another project. The contraption was affixed to a couple of picnic tables and a beam in the packing shed. 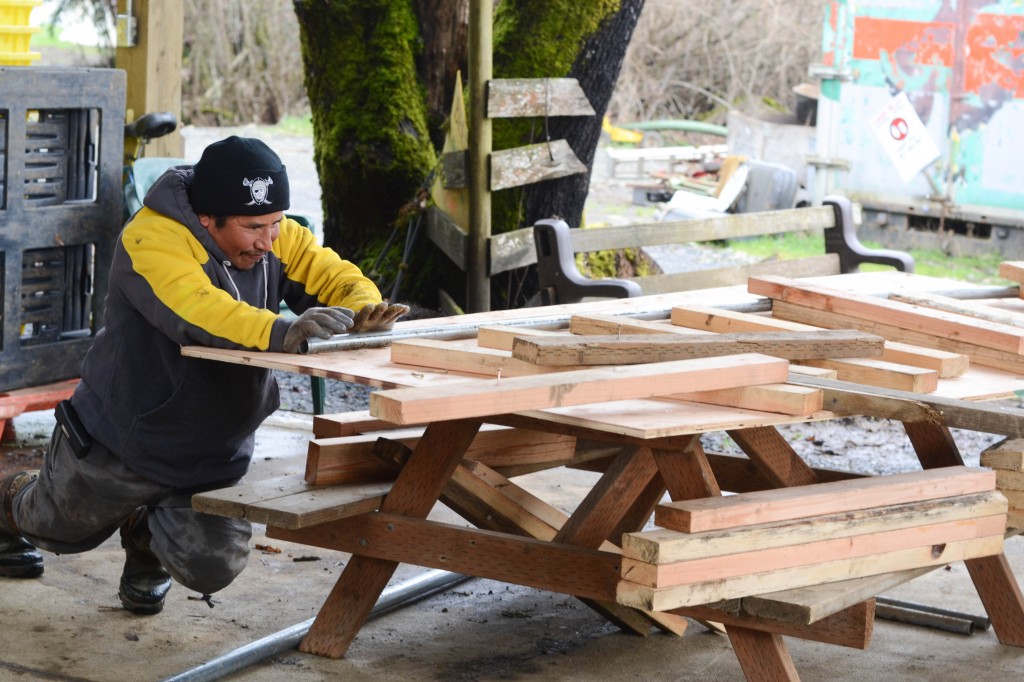 Instead of gently feeding poles into a pipe-bending machine, this method required quite a bit of muscle. 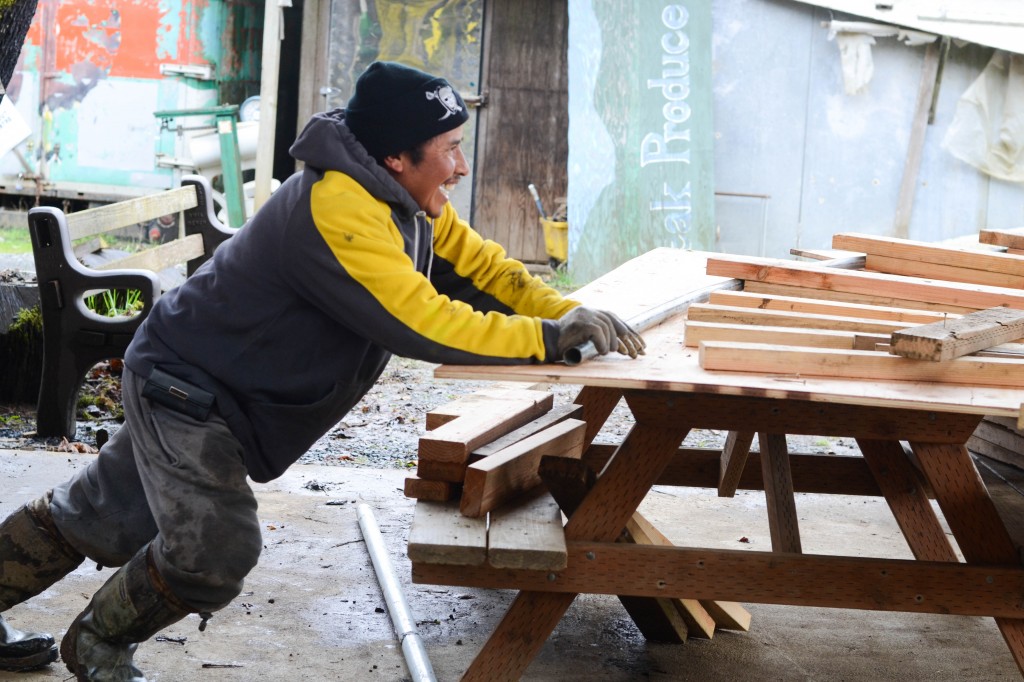 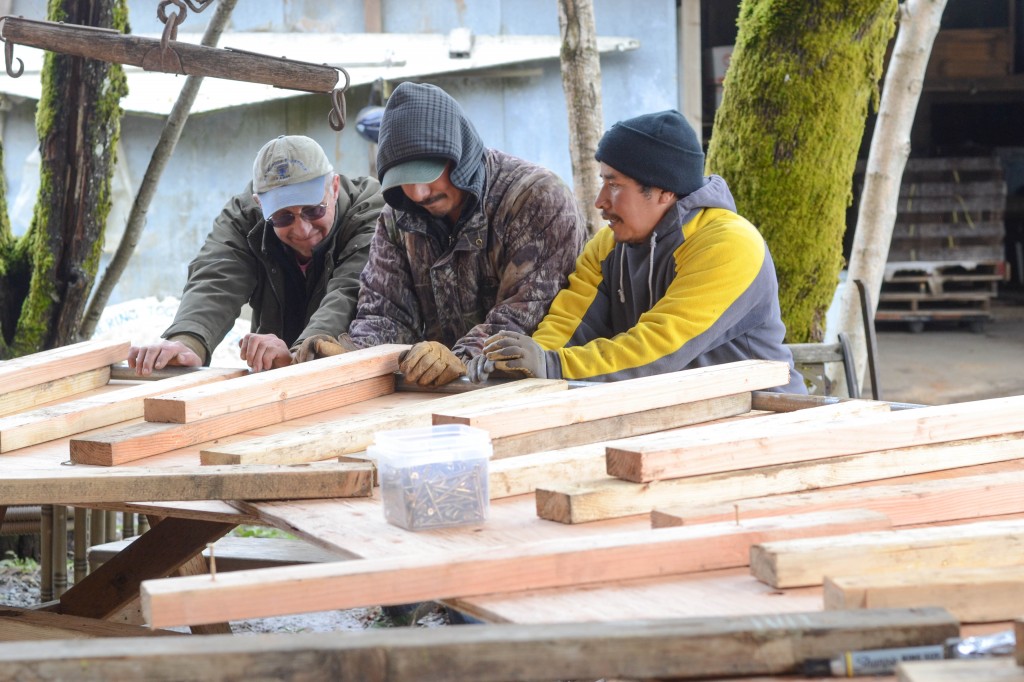 The system didn’t work perfectly. There were kinks to be worked out and overly flat sections. The 2 x 4s were reconfigured several times as trial and error suggested improvements. 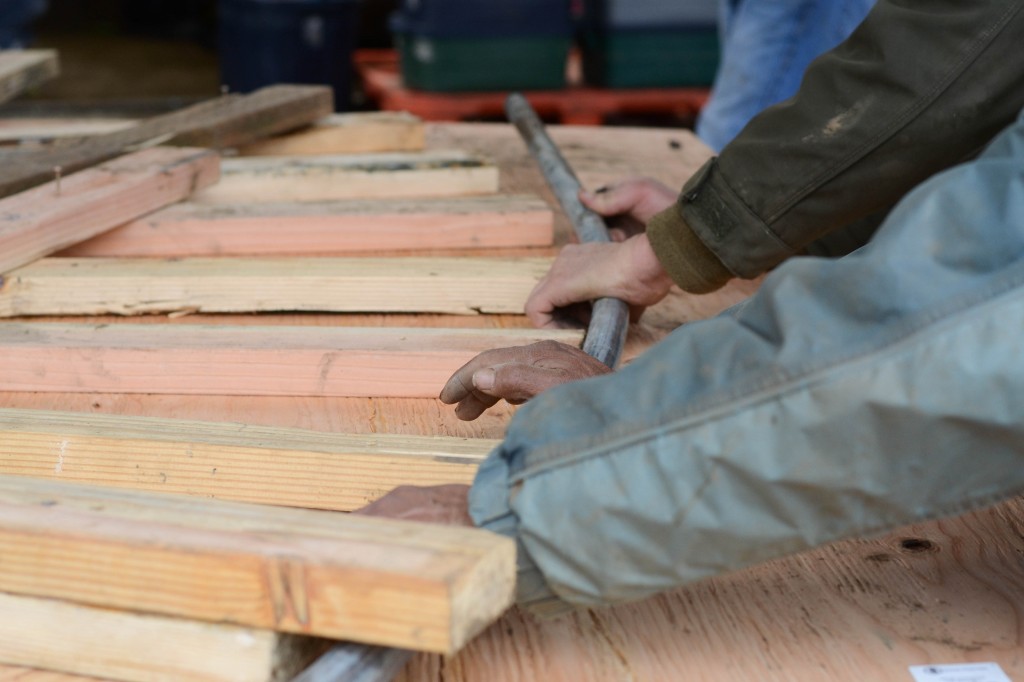 It was a labor-intensive project. Was it cost effective? Well…maybe. 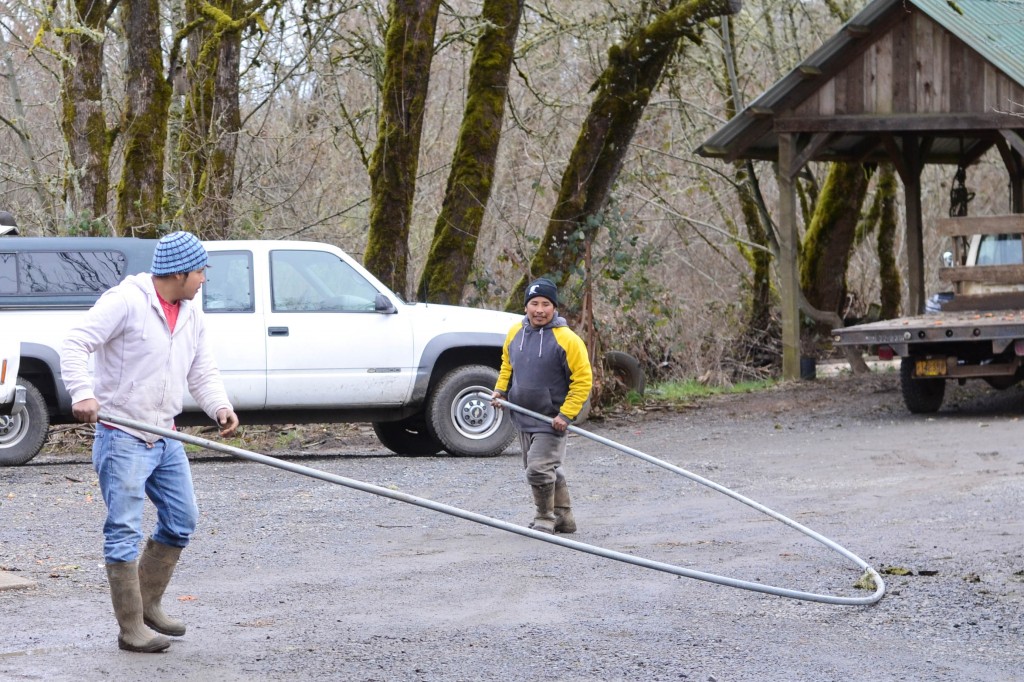 But at the end of the day, the crew had hoops to work with. 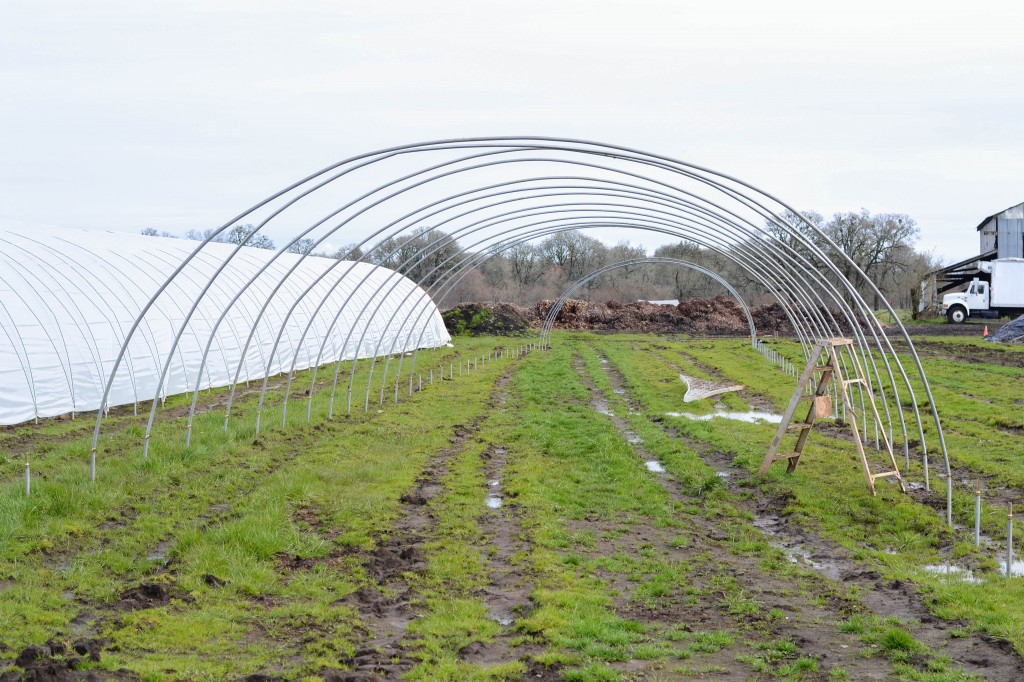 Meanwhile in the field…

Here are the first few farm-bent hoops in the ground. They’re obviously not perfect, but the tension of the plastic and the supports will hold everything together well enough. The only real concern about this DIY bending method is that there may be particular points of weakness that will be extra vulnerable under a future snow pack. 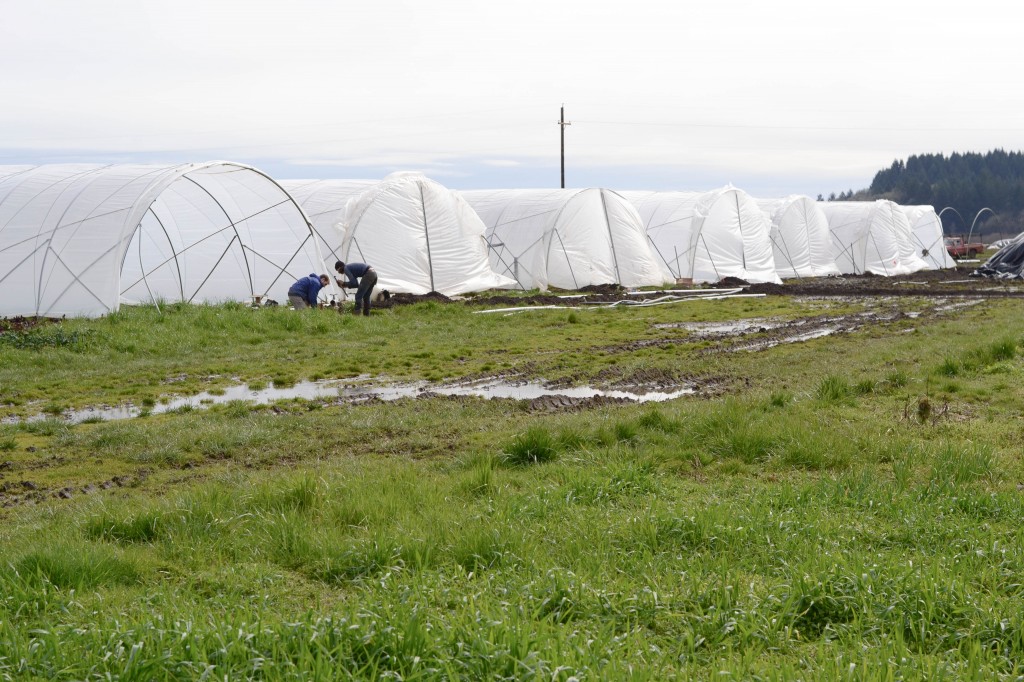 Two of these greenhouses were here last season, but six are new. After two cold, wet springs in a row, the farm management was feeling like it needed to hedge its bets by creating more spaces where the climate could be somewhat regulated. This year, Joelene and the crew will plant greenhouses with crops they’ve never planted under cover before like bunching chard, radishes, etc. More potatoes will grow in greenhouses than out in open fields. These crops will all but guarantee that the farm will have a product to sell at early spring farmers’ markets and will be prepared for a bigger-than-ever group of CSA members expecting produce boxes starting in mid June. 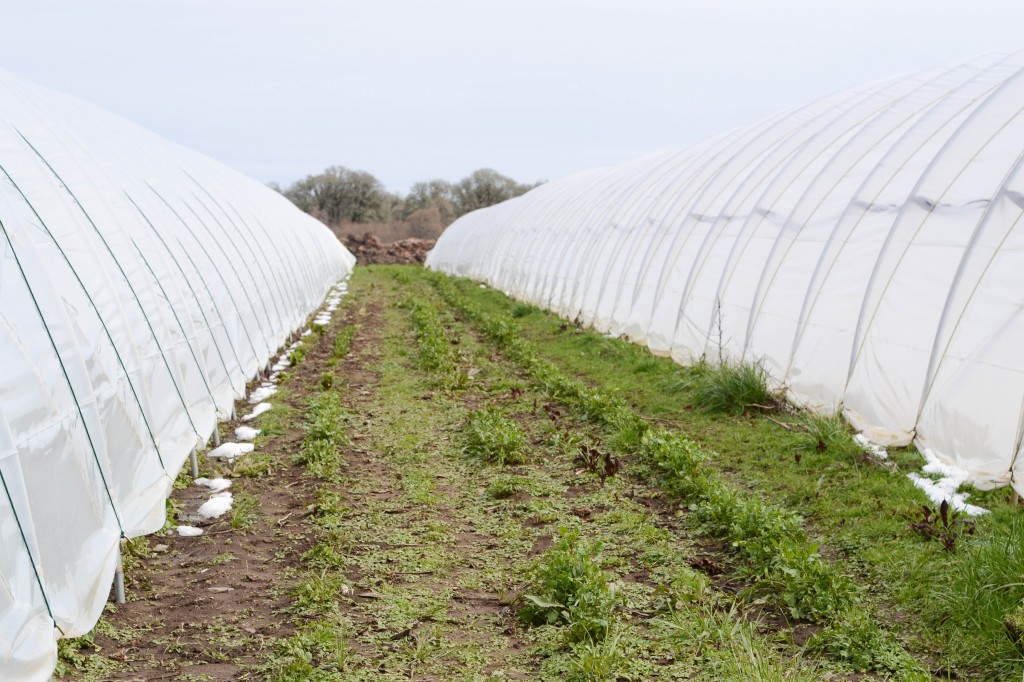 There are also spaces between the greenhouses that serve as small micro climates. Last year, peppers were planted in one such area, and they were highly vigorous and prolific. 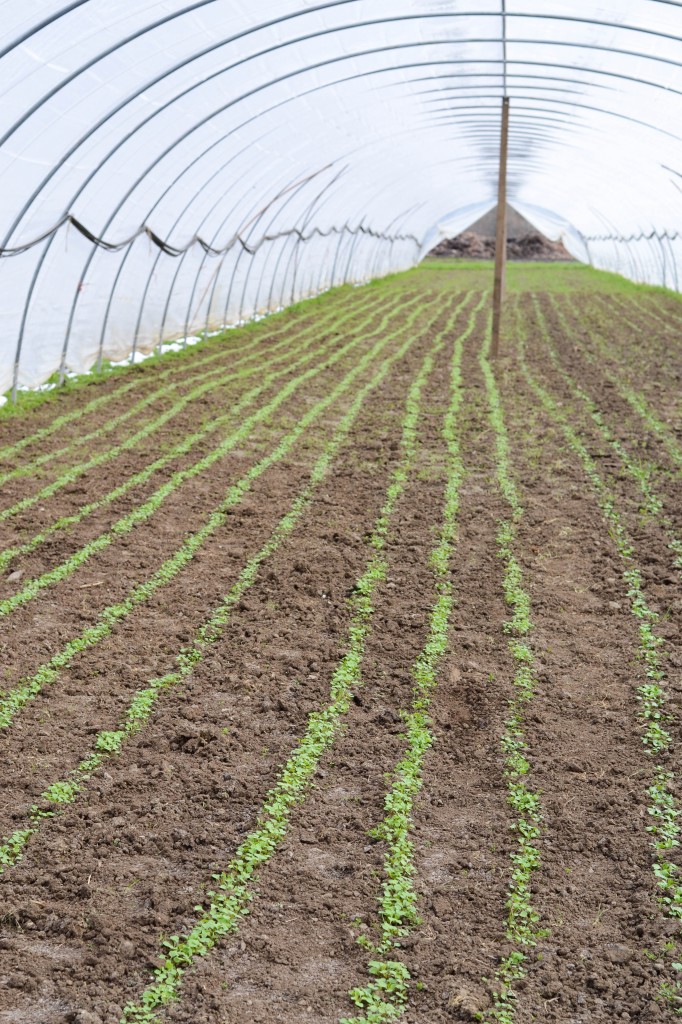 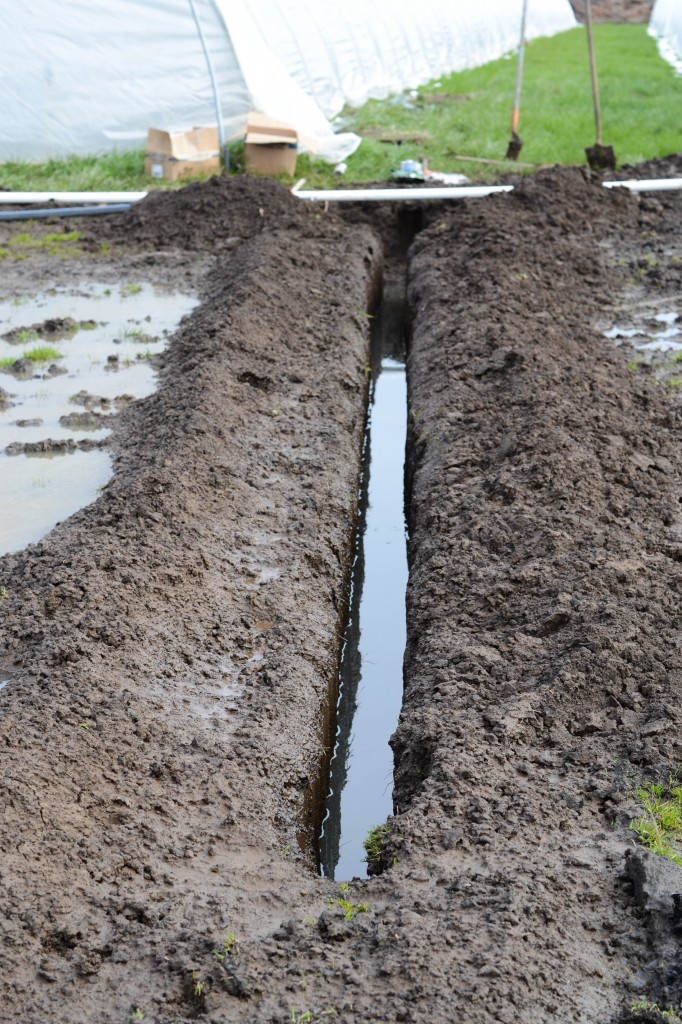 Several of the new greenhouses have already been planted with new crops this spring like the one above that’s seeded with radishes and mustards.

Joelene’s primary task right now is rigging up proper irrigation for each of the new greenhouses. 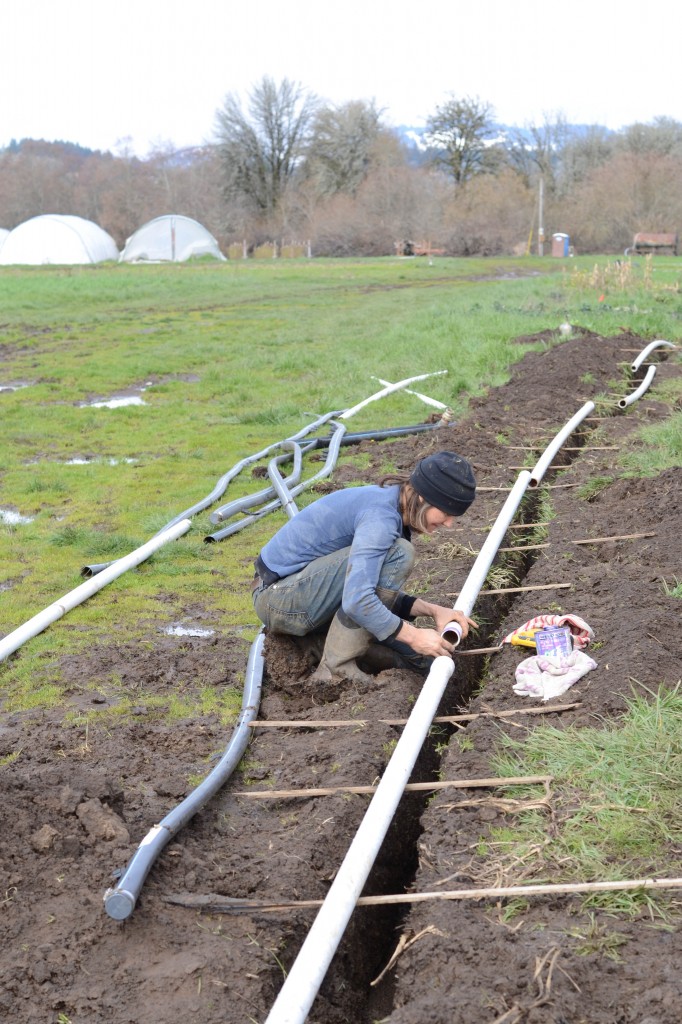 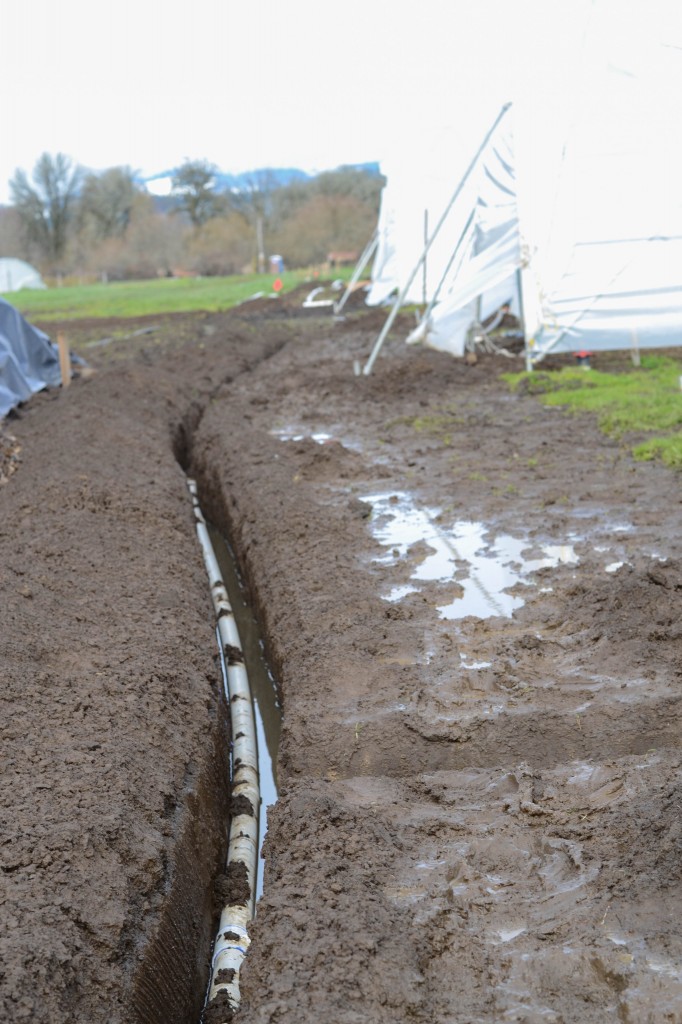 Joelene (seed, irrigation, and greenhouse manager) sets up all new greenhouses for both drip and overhead irrigation, so that they can accomodate a wide range of crops. Also important is accessibility. Ideally, the crew would be able to get tractors in and out of the greenhouses and be able to drive up to or inside them, too. That means irrigation pipes must be buried. Some of these trenches were dug with a trencher and some were dug by hand. Either way, it’s been a super muddy project. 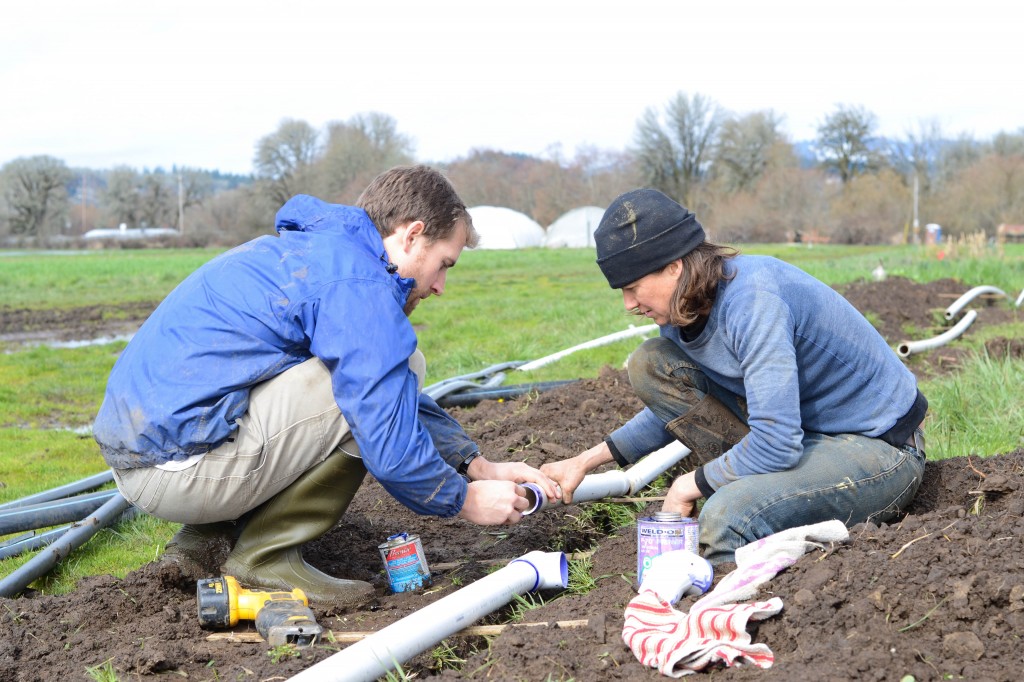 Guy has been helping Joelene with the fittings and set up. 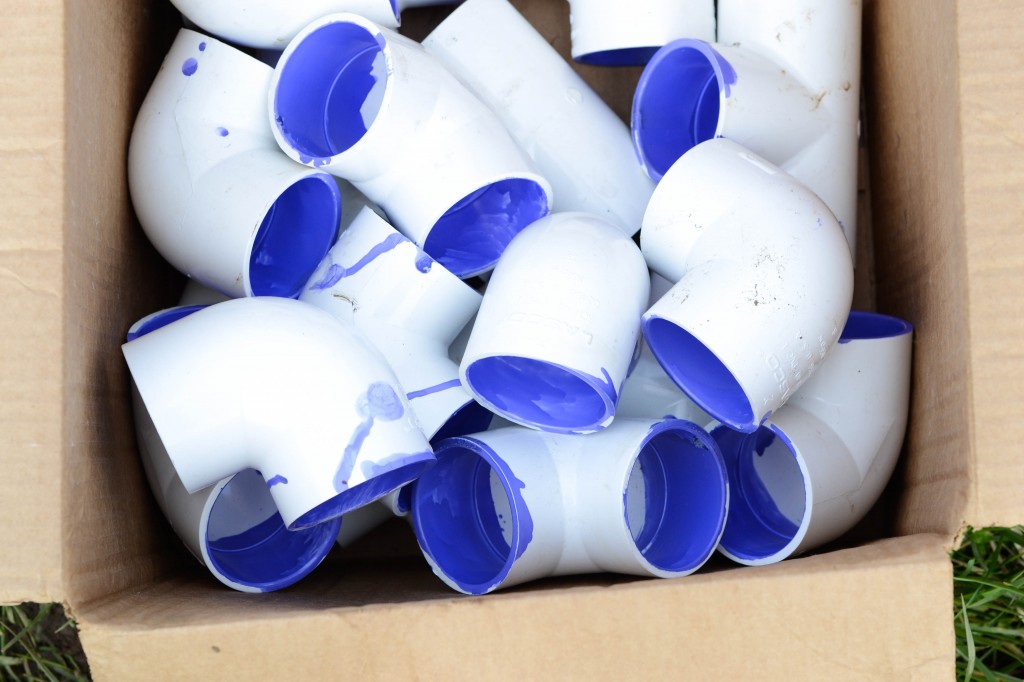 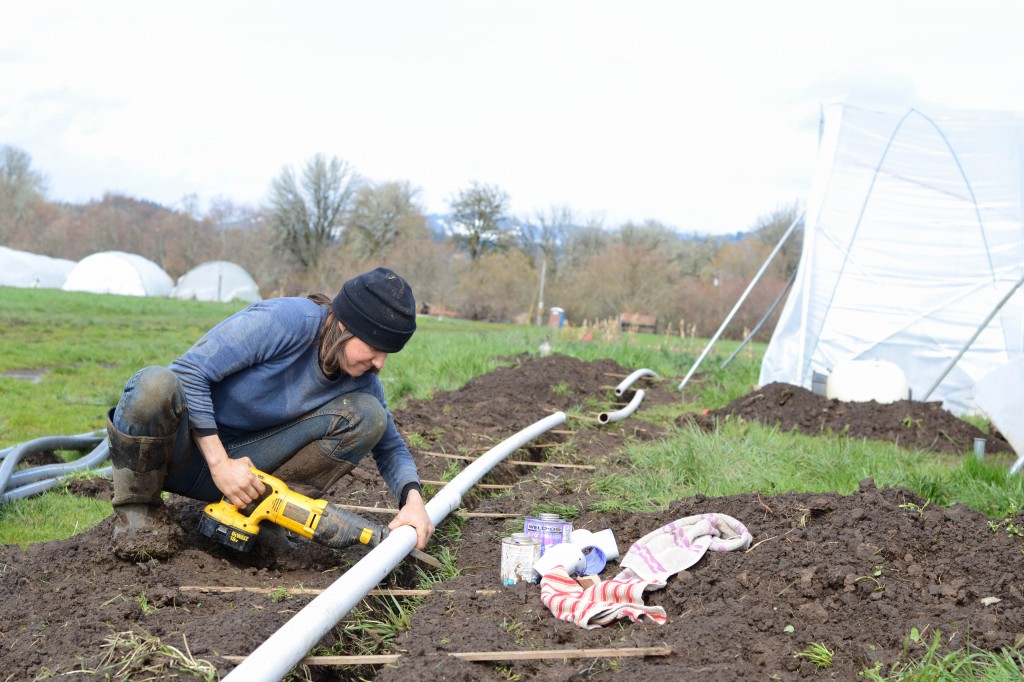 Each of the two sets of three greenhouses will be equipped with its own sand filter, and Joelene has planned to have plenty of easily accessible hookups for drip irrigating the adjacent field or setting up irrigation in neighboring greenhouses that may be built in the future. Planning ahead now will take a little extra time and supplies, but it has the potential to save a huge amount of energy and effort years down the road. 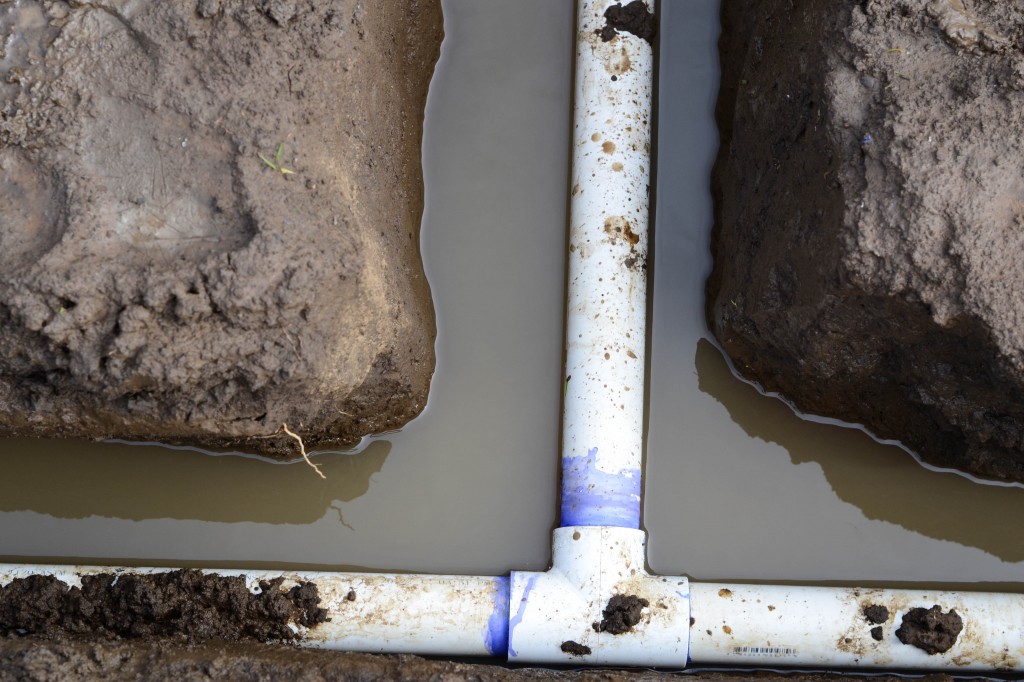 The whole process of setting up irrigation has been hampered by the wet weather. The individual pipes leading to each greenhouse will eventually be plumbed into a mainline that is over four feet underground. The mainline has been located, but it is at present so far below the water table that Joelene will have to wait until the weather dries out a bit to have good enough access to hook up to it. 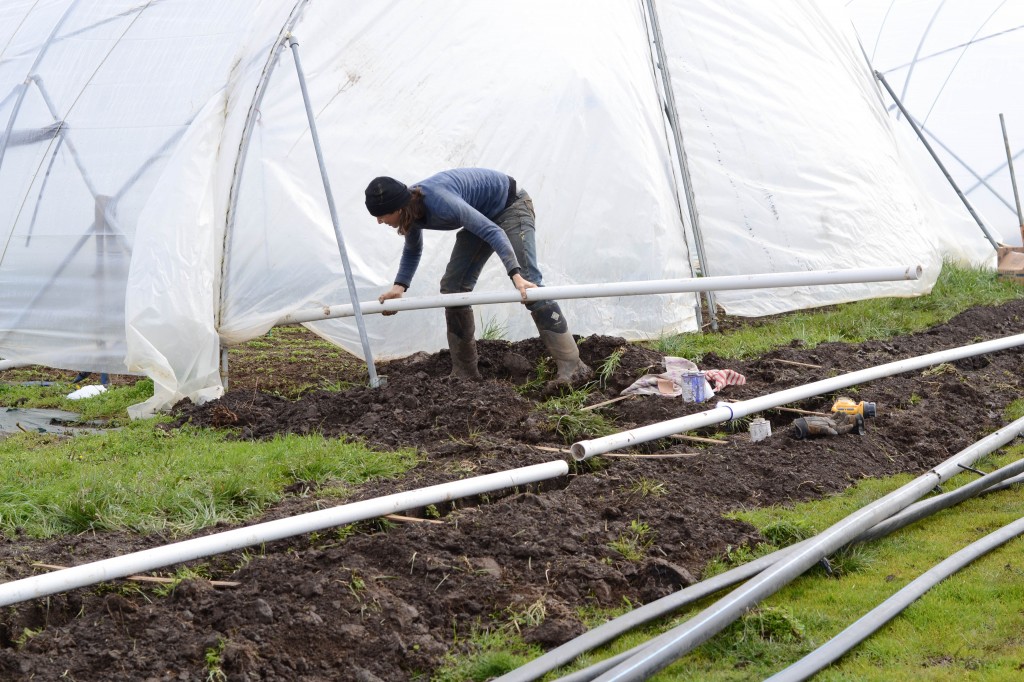 Joelene is the mastermind and the main source of muscle behind the mélange of irrigation systems that cover the entire farm. Thanks to her (and her assistant, Sarah), GTF fruits and vegetables have the needed water to flourish.