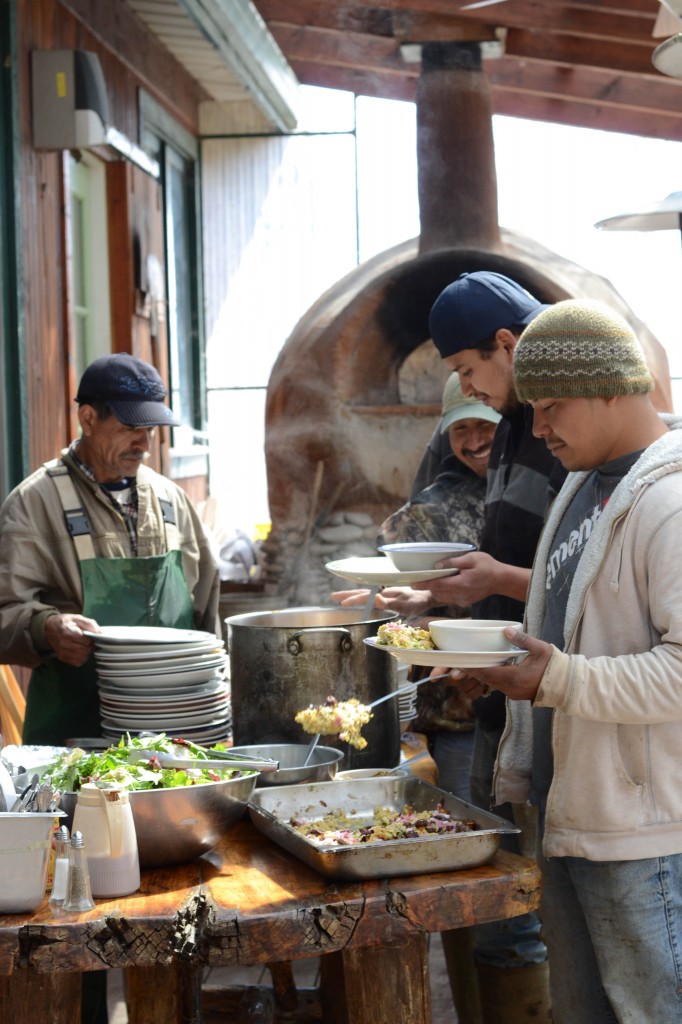 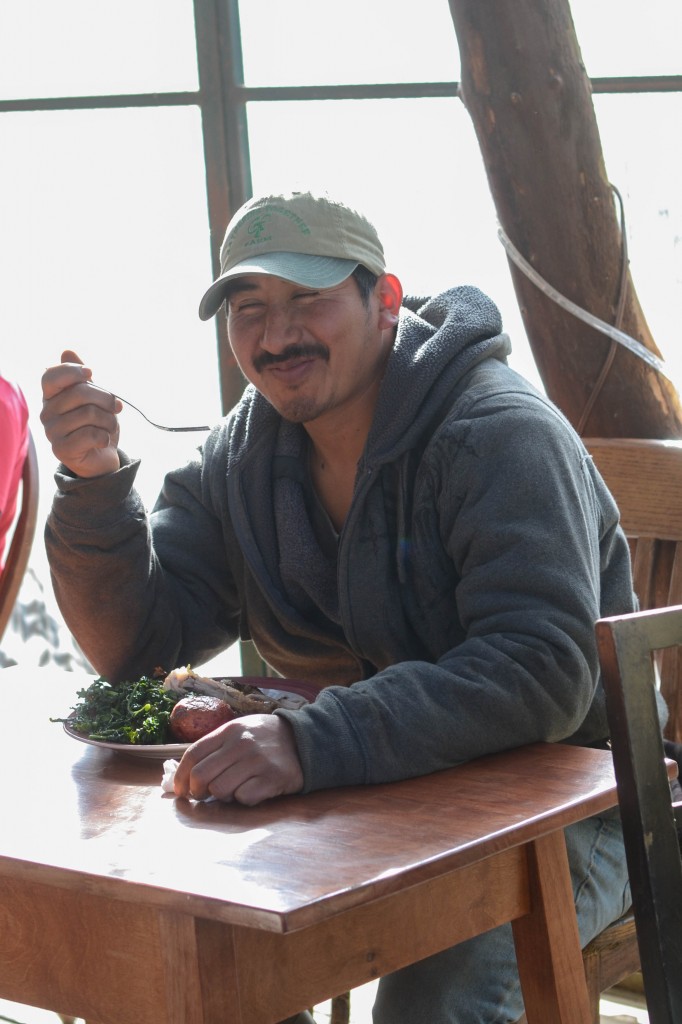 Every Monday, Wednesday, and Friday on the farm, the entire crew gathers and eats a hot lunch prepared in the farm kitchen. A tradition that has been carried on since the early days of Gathering Together Farm (25 years ago), farm lunch brings together the office staff, the field crew, the seed crew, the folks working in the packing shed, the mechanics, and everyone else laboring away in far-flung corners of the farm. 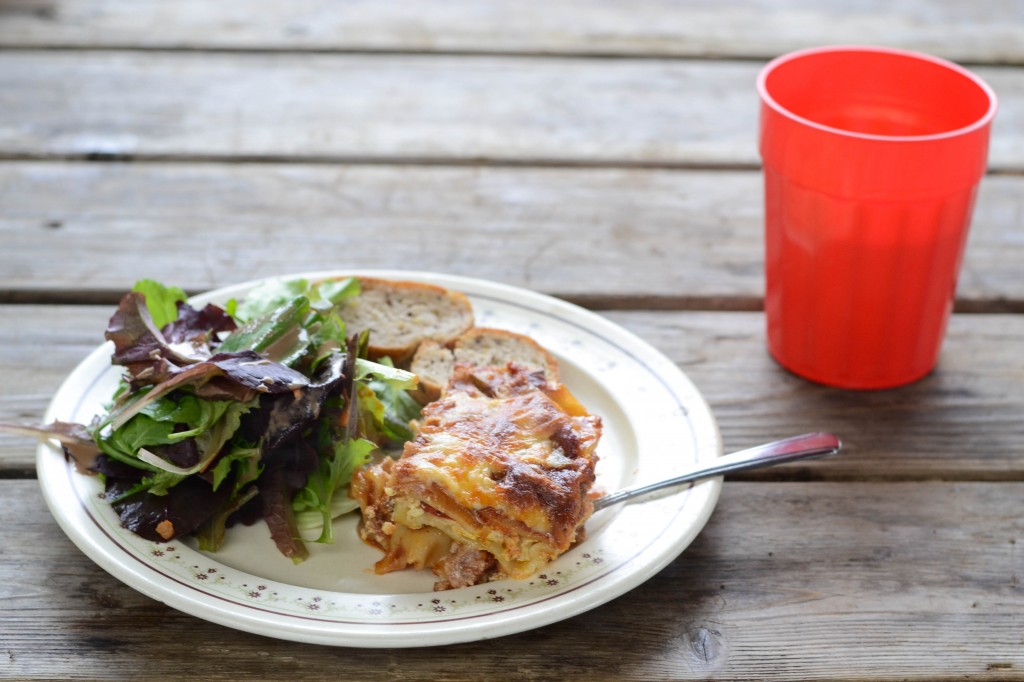 The meal itself consists of a hearty, hot main course usually with a side of salad or vegetables fresh from the fields. It’s not fancy or beautifully arranged, but it is filling and healthy and real. 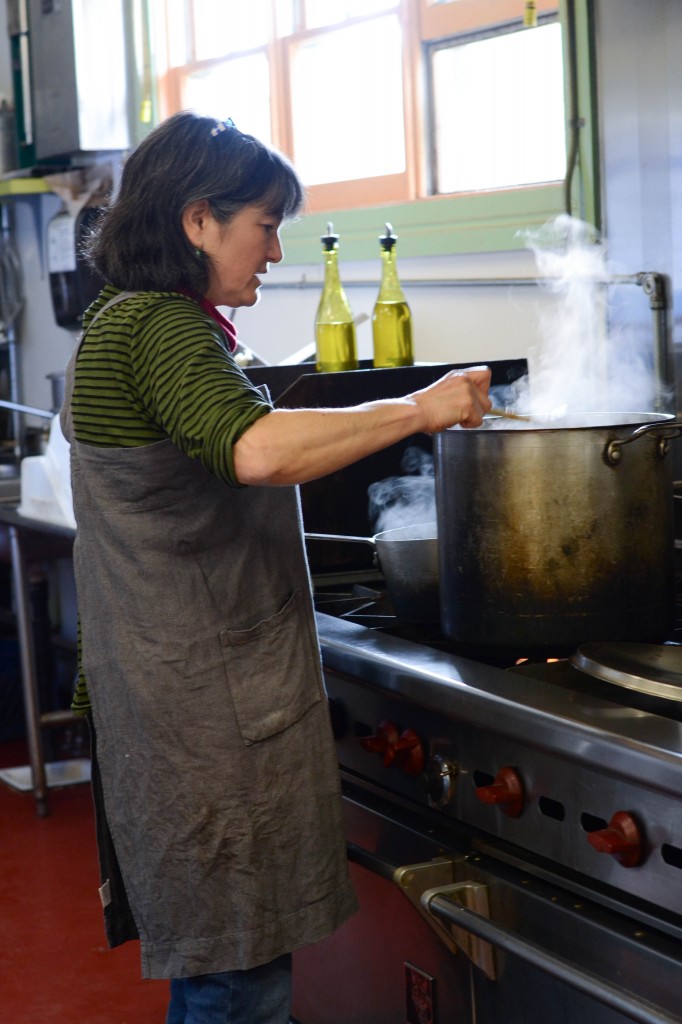 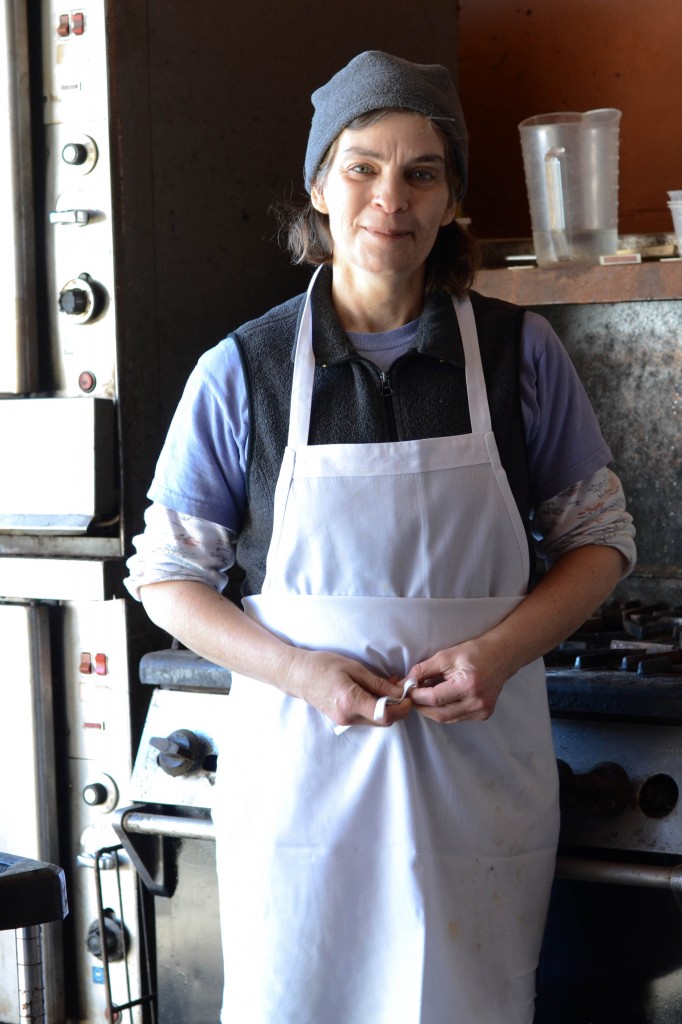 Paula (above left) cooks farm lunch on Mondays, and Mary (above right) cooks farm lunch on Wednesdays and Fridays. Both Paula and Mary have restaurant/catering experience, so cooking for a crowd is something they know well. Paula also works in the greenhouse (seeding and grafting tomatoes), but Mary’s only job on the farm is to cook for the crew, and it is indeed a big job. Each woman averages a seven-hour shift per day dedicated entirely to baking snack, cooking lunch, and cleaning up, plus additional time spent shopping and meal planning. 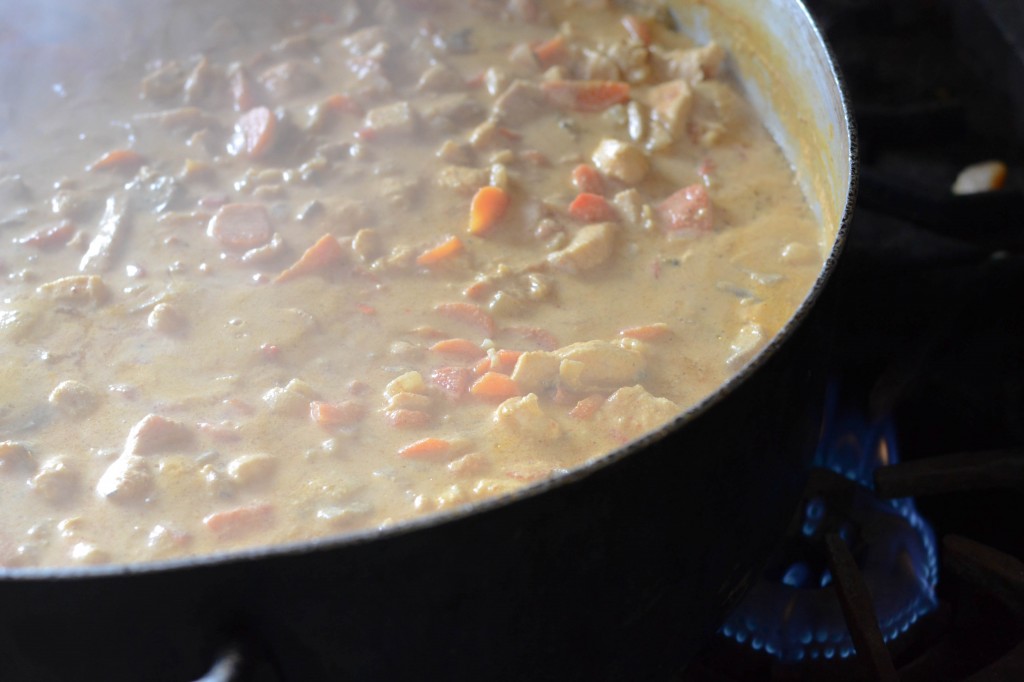 When the crew members come in from the fields for lunch, they are HUNGRY. In the summer, the field crew generally starts work at 6 AM and stays until 7:30 PM or later. After all that planting, picking, bunching, weeding, walking, lifting, trellising, and organizing, they need to refuel with a whole lot of calories. During the height of the season, as many as 50 people are working on the farm in various different areas, so Paula and Mary need to make an enormous amount of food. Mary calculates the day’s food needs by multiplying the total number of folks out working by 1 1/2 times standard catering portion. Often times, she or Paula will cook up a giant quantity of saucy meats and vegetables (to be served over rice or potatoes) in a cauldron-like vessel that covers no less than four burners on an industrial stove.

In addition to lunch three times per week, the cooks also provide snack every work day in the form of something sweet (like these scones) to go along with hot coffee during a mid-morning break. 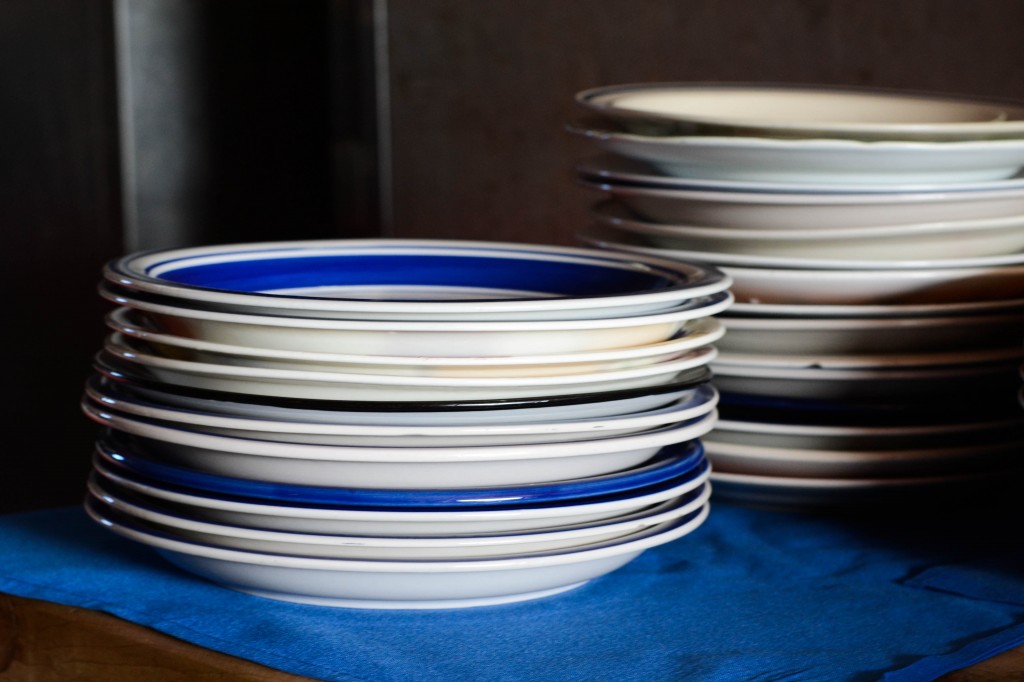 On days when the farm stand restaurant is closed, a buffet-style spread is set up in the “Garden Room” (the walled in porch dining area of the farm stand), but usually, the food is laid out in the dark interior of the packing shed. 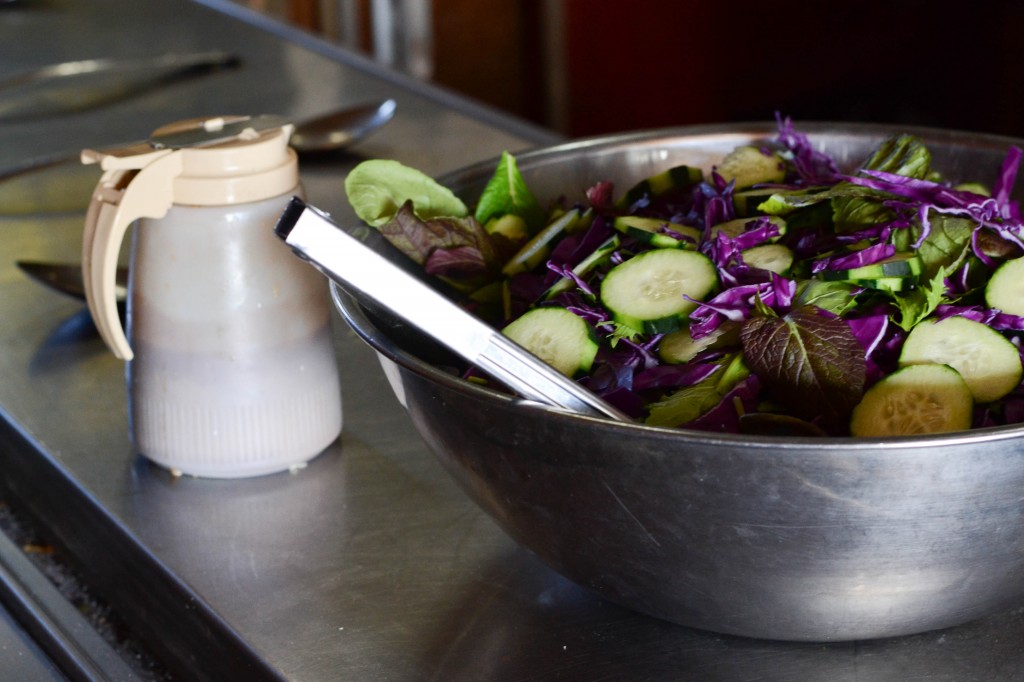 Salad is almost always a part of farm lunch. 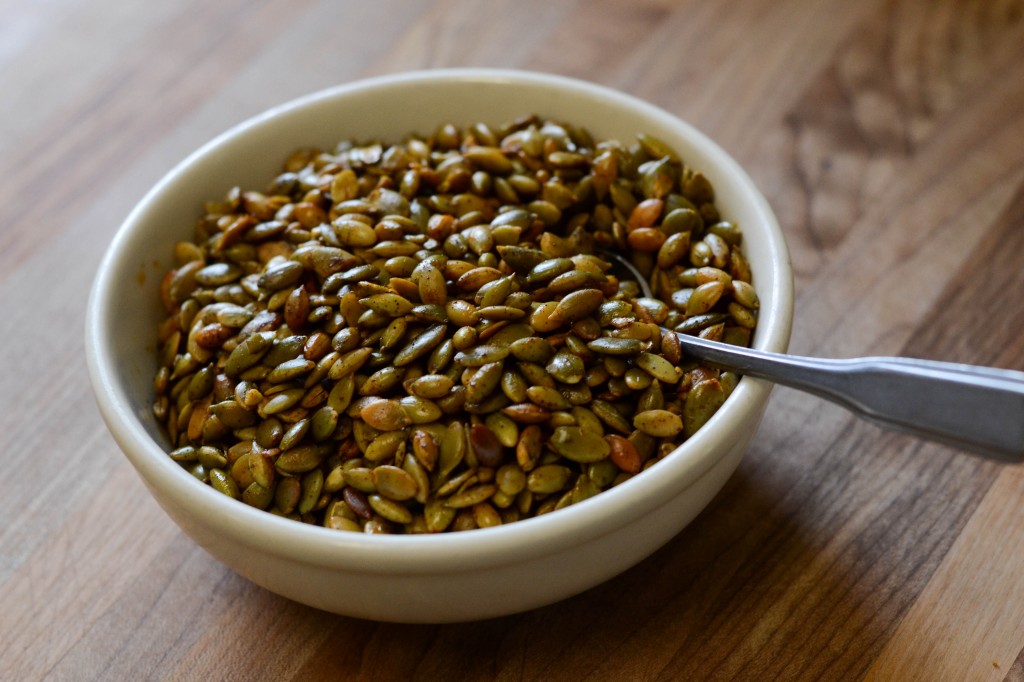 Paula and Mary are given free reign to cook whatever they choose, but both are extremely conscientious about sticking to a budget. Feeding 25 to 50 people three times a week can get expensive quickly, especially when attempting to create a nutritious meal out of high-quality ingredients. The farm lunch cooks take advantage of the wealth of produce available direct from the farm itself, but they also try to utilize less expensive cuts of good meats and extraneous odds and ends found in the freezer that aren’t likely to be used up by the farm stand restaurant chefs. Paula and Mary often embellish a mass-produced pot of soup or stew with crunchy, spicy, sweet, or savory extras like nuts and seeds, raisins, chutney, toasted coconut, salsa, or other condiments. 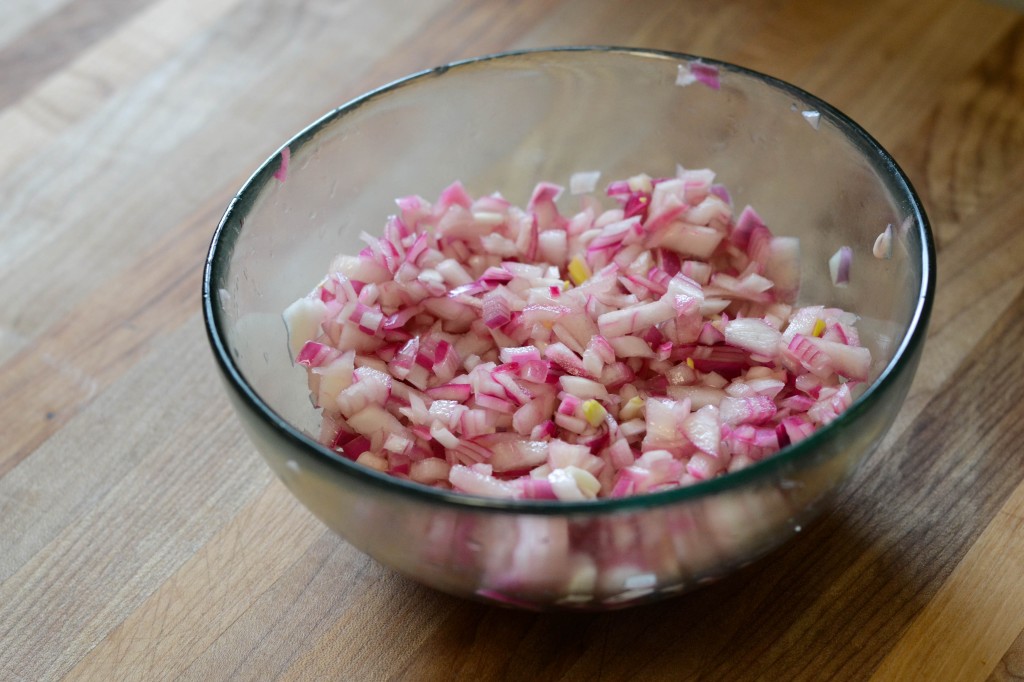 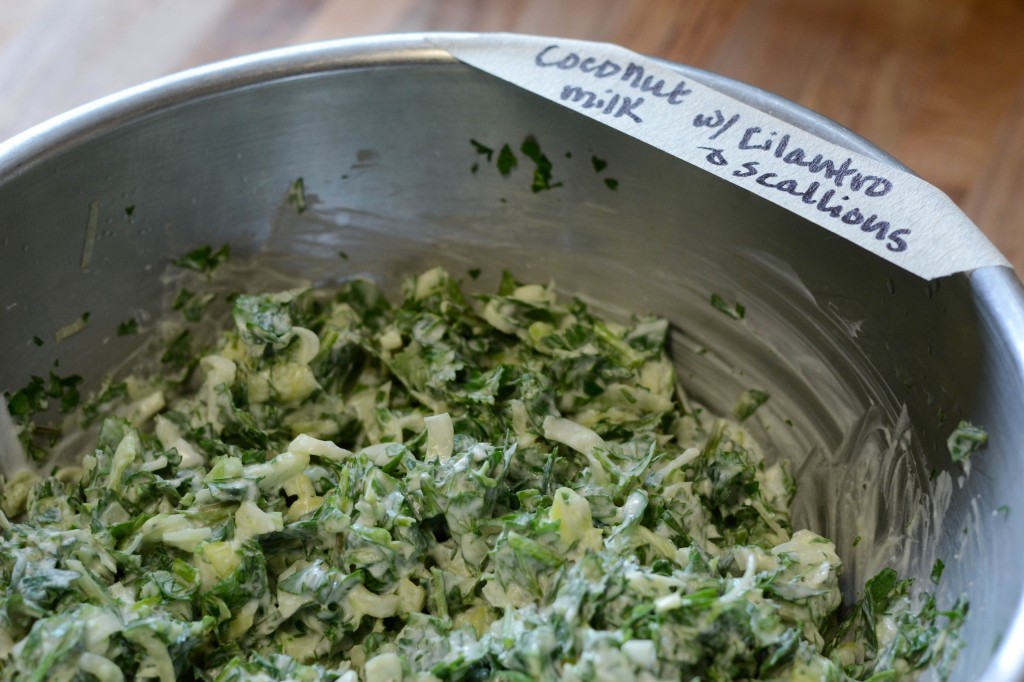 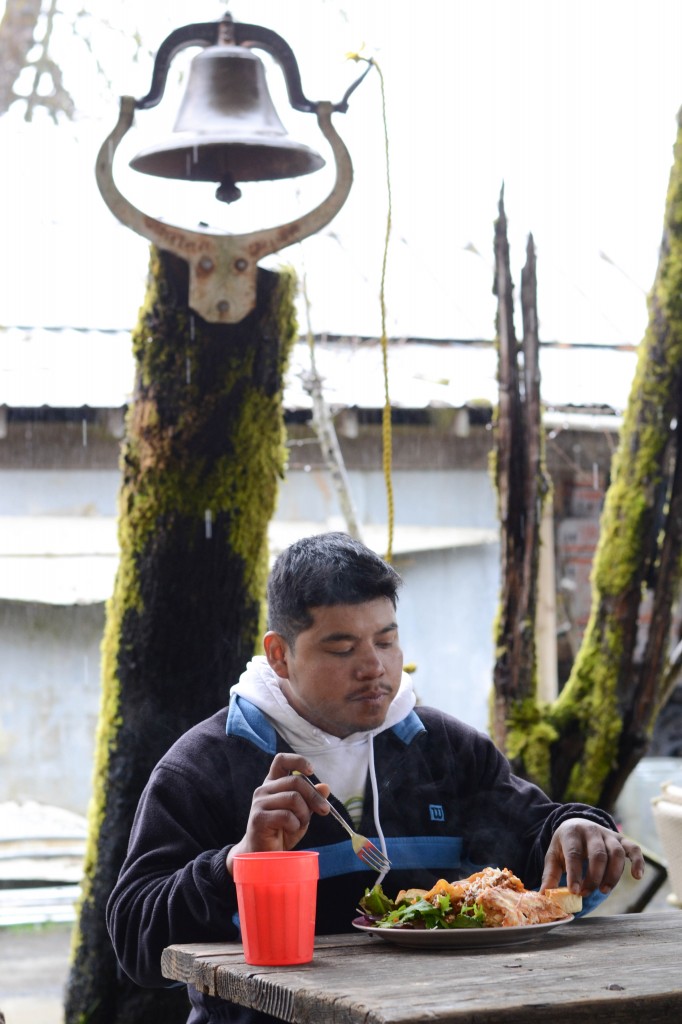 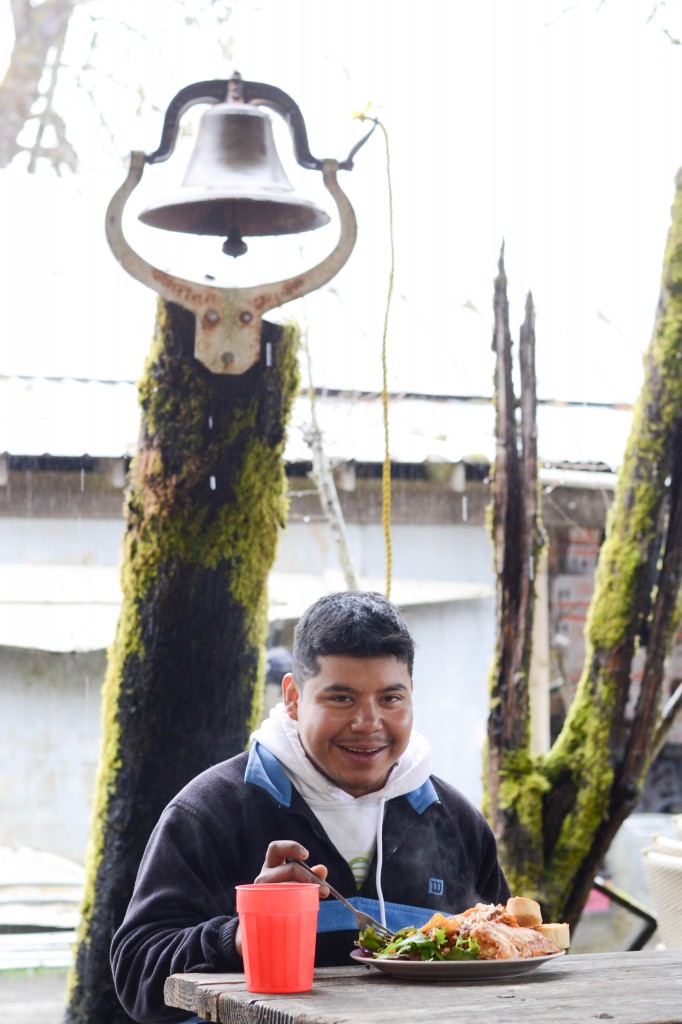 At about 1 PM, the cook on duty rings the lunch bell, calling in the crew. 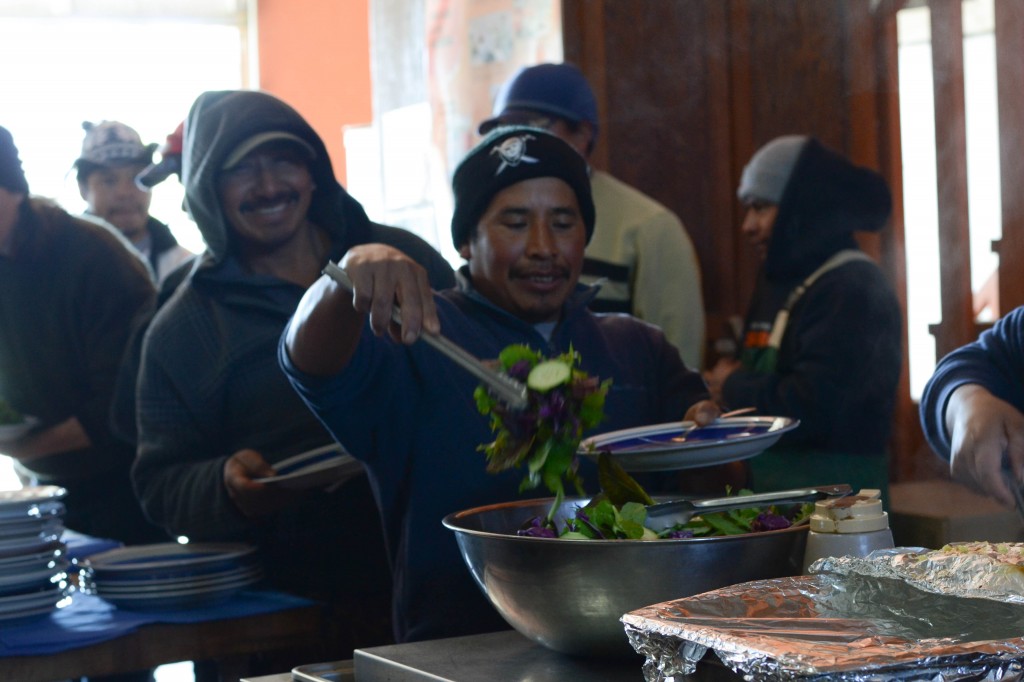 While many workers are out of earshot when the bell rings, it doesn’t take long for the tasks of the moment to be set aside and the crew to filter into the packing shed. The crew members wash mud off their hands, stomp mud off boots, and join the line of folks waiting to serve themselves. 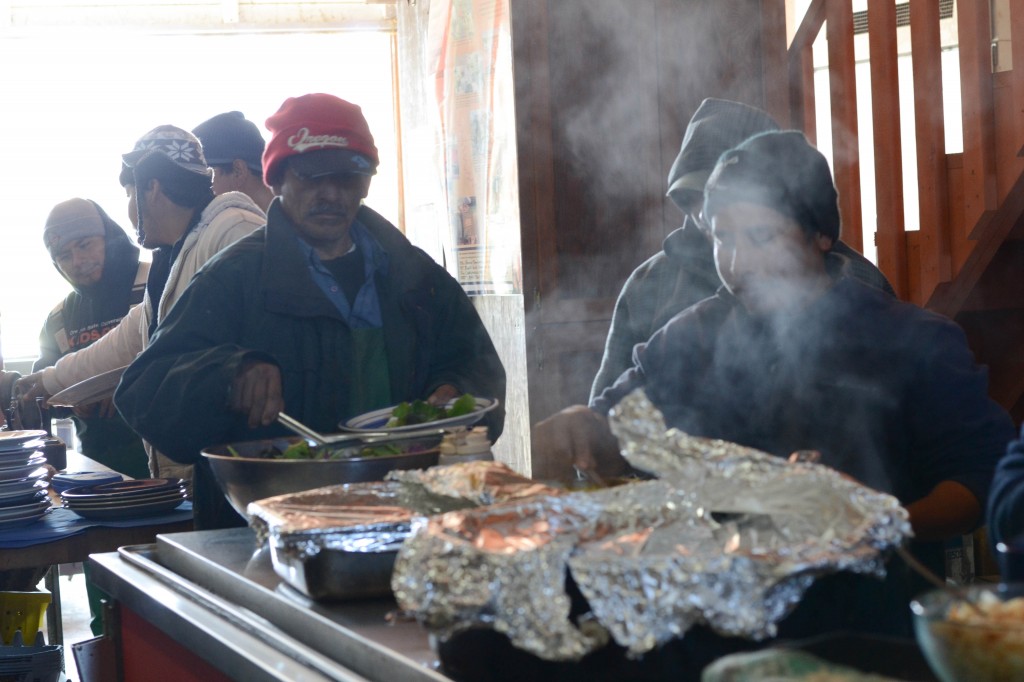 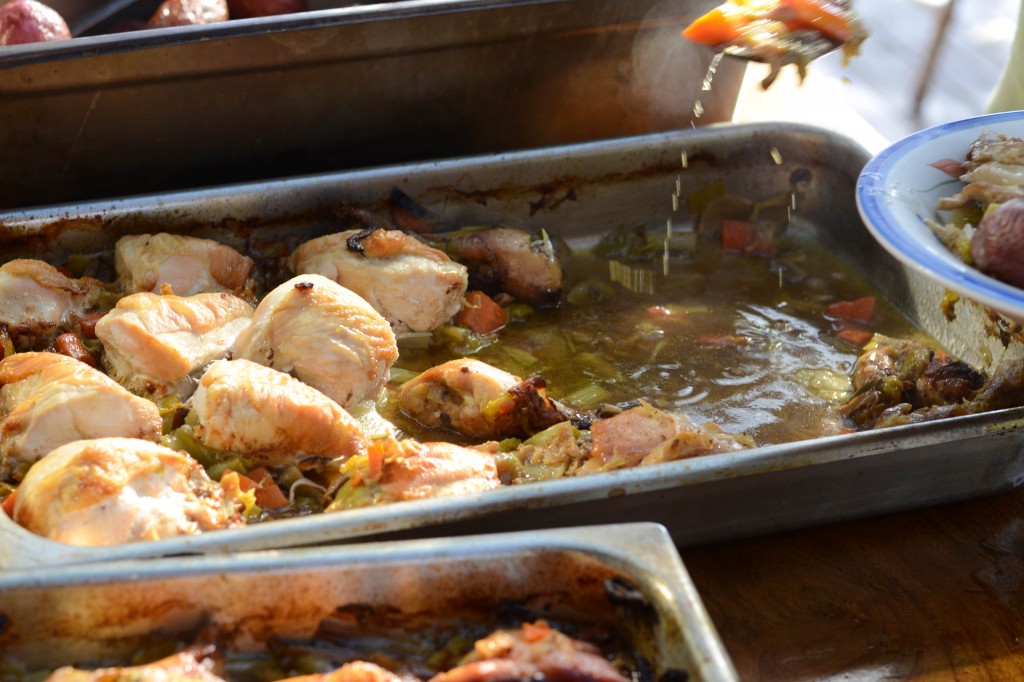 Plates are piled high with food, cups are filled with cold water or hot coffee, and then the crew settles down into tightly packed picnic tables.

The GTF staff eats outside no matter the weather. On rare nice days in winter and spring, the picnic tables are arranged in full sun, but usually, the crew enjoys a brief break under cover out of the rain in winter or in the shade during the summer. 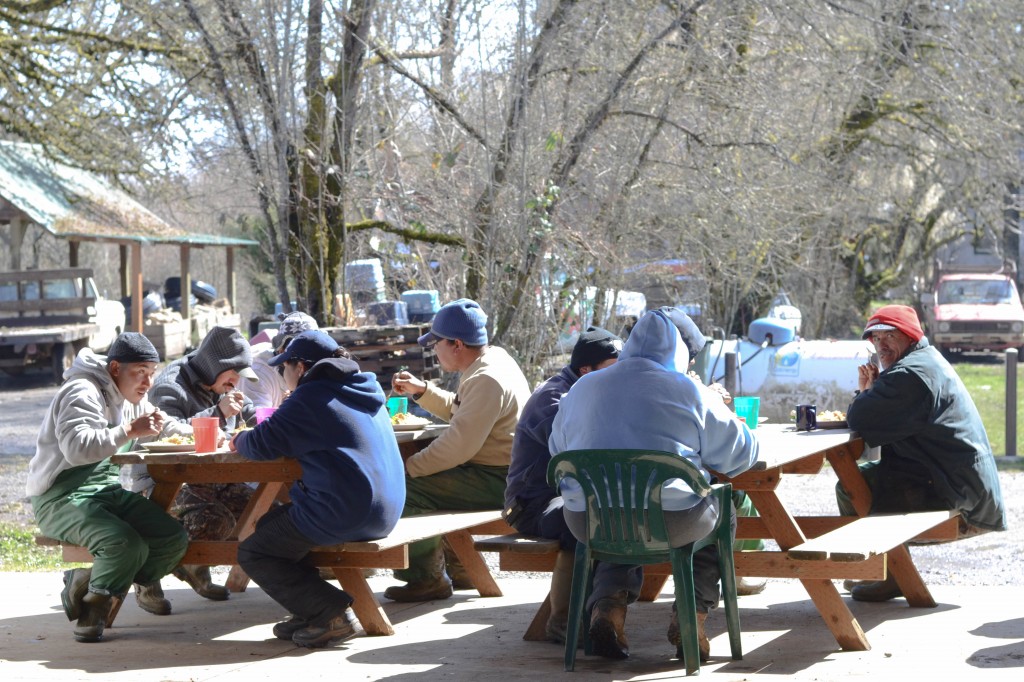 The conversations start off slowly as everyone is first focused intently on eating, but usually around mid-meal, the banter begins. Often times there’s chatter about the work: which vegetables are available that week, where to fertilize, what fields to prep next, but the crew members also open up to each other about families, weekend activities, and the places from where they originate: small towns in southern Mexico, New Hampshire, Philomath, or elsewhere. 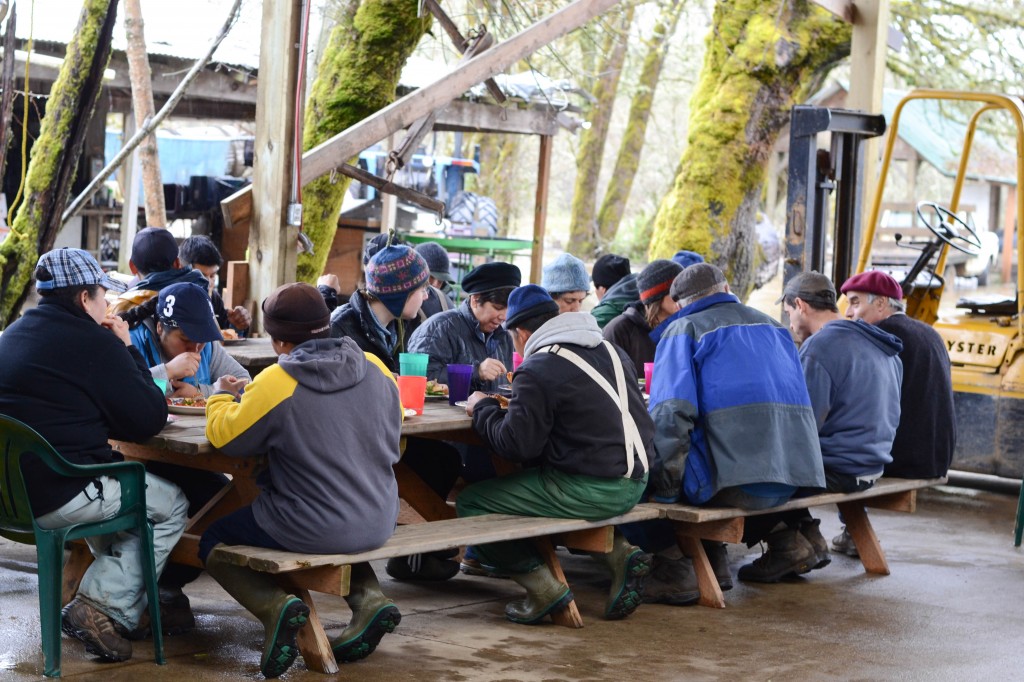 In my own experience, I know the feeling of waking up at 5:00 AM in August, sleep-deprived and bone-weary after putting in 70+ hours of labor for weeks on end, and thinking to myself, ‘What am I going to make for lunch?’ Those three days a week when I could count on having a hot, nutritious meal without any extra effort or expense on my part were deeply comforting. Because I was dedicating so much of my mental and physical capacity toward working for the success of the farm, it was sometimes hard to appreciate the time and energy put out on my behalf, but looking back, I can say that farm lunch was a true blessing.

Paula, Mary, and Rose (human resources, customer service, and marketing manager) have sat down with John and Sally (farm owners) in the past to discuss the financial costs of farm lunch and the intangible benefits. They opened a dialogue about whether this tradition was really worth the expense, and John and Sally’s answer was an unequivocal “yes”. While the farm has grown and the ritual isn’t quite as intimate as sitting around John and Sally’s kitchen table like in the “old days”, the communion is still ever present and the sustenance provided allows the crew to keep on truckin’ out there. John and Sally recognize that they are asking for a monumental effort of the crew, and farm lunch is just one of the ways they can show their appreciation for that kind of dedication even as they pinch pennies in other areas of the operation. In their minds, it IS worth it.