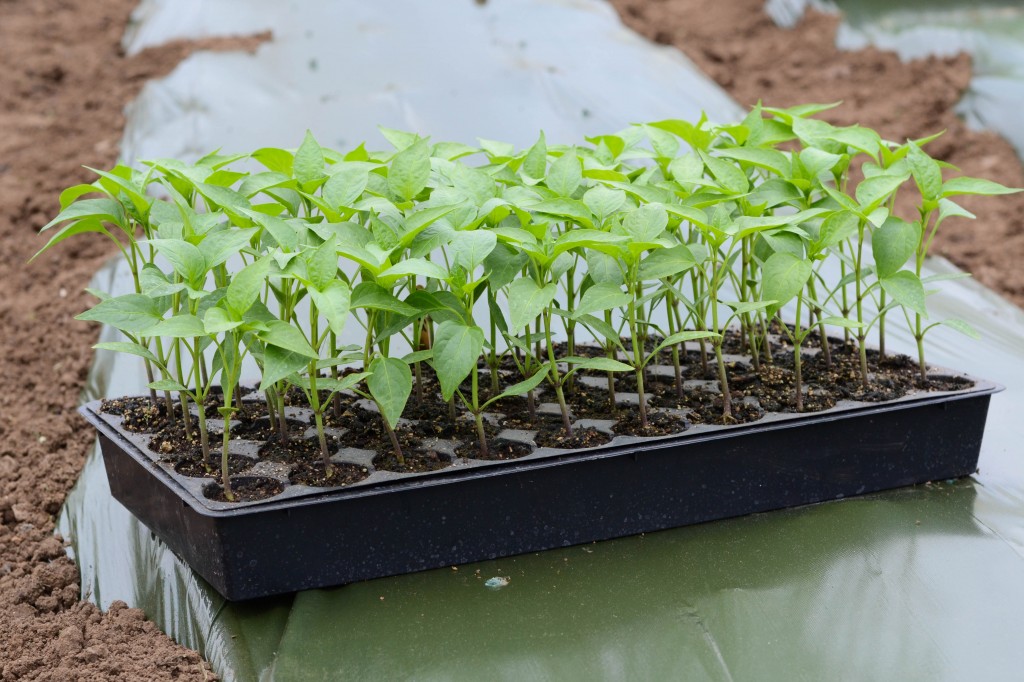 Because of multiple flooding events this winter and near-constant rain, our spring planting schedule has been delayed significantly. The soil has just been too wet. Even in the greenhouses, the water table was near surface level until recently. Thankfully, the sun finally decided to come out for a few days last week, and we got a ton of much-needed planting done both inside and out of the greenhouses.

Last Friday, the crew planted a small greenhouse with jalapeños and ancho peppers. The pepper plants were beginning to outgrow their cells and needed to get into the ground before becoming root-bound. 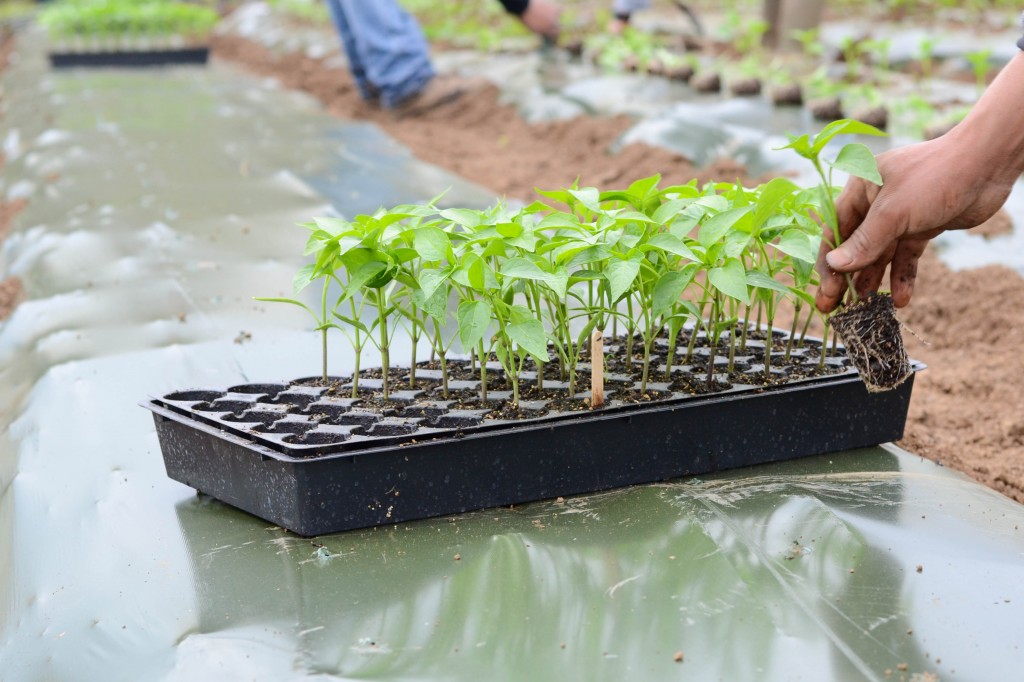 Before planting, the crew laid down plastic mulch over lines of drip irrigation tape. One person measured out two rows per bed and poked small holes in the plastic at one-foot intervals. 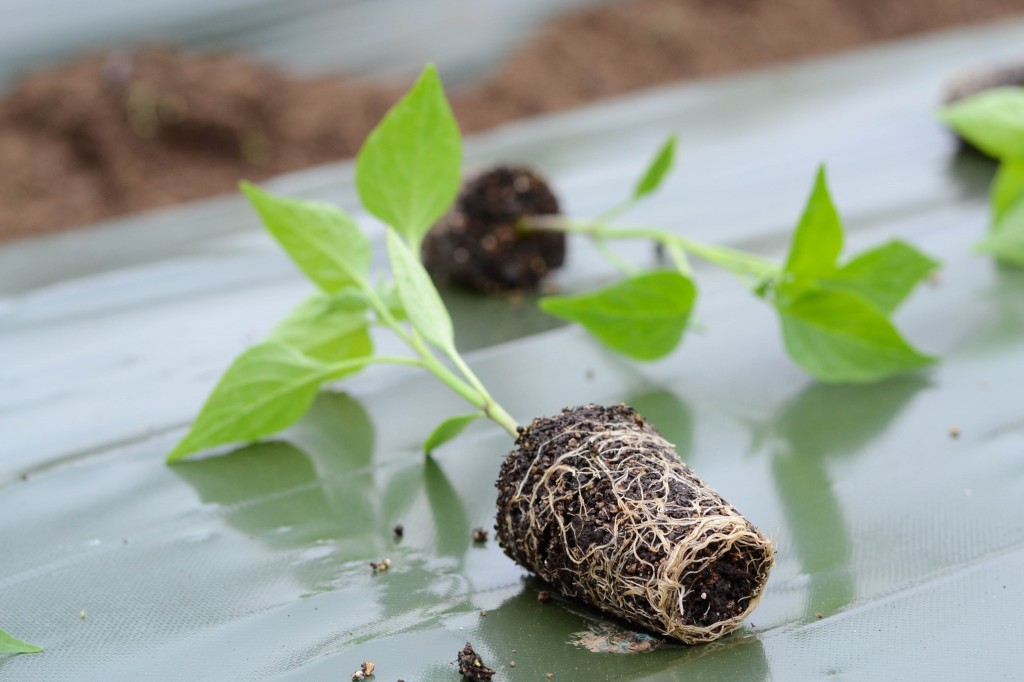 Another person carried trays of peppers down the rows and gently placed a pepper plant next to each hole. 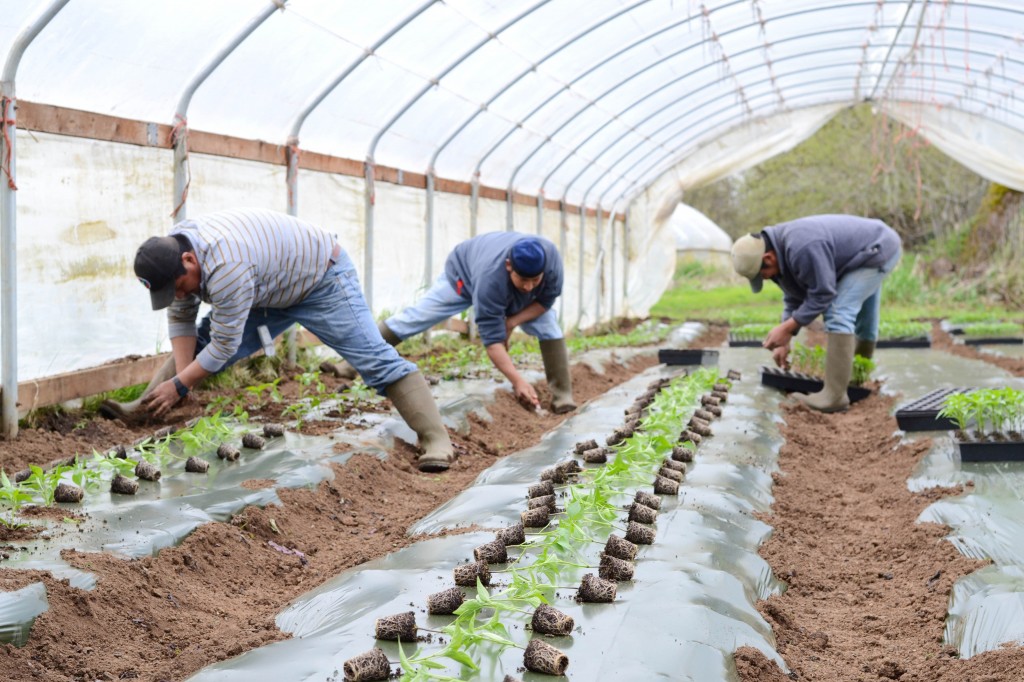 The rest of the crew followed behind the plant layer downer (in this case, Palemon), and proceeded to plant the peppers in the ground. 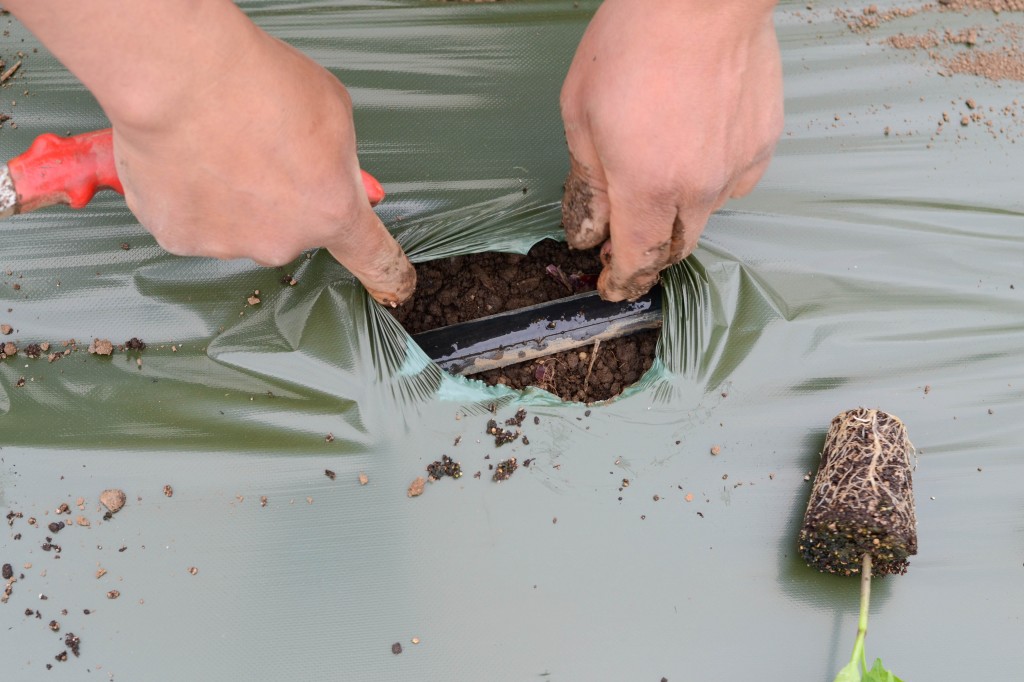 The planter used his (or her) fingers to open the pre-poked hole in the plastic. 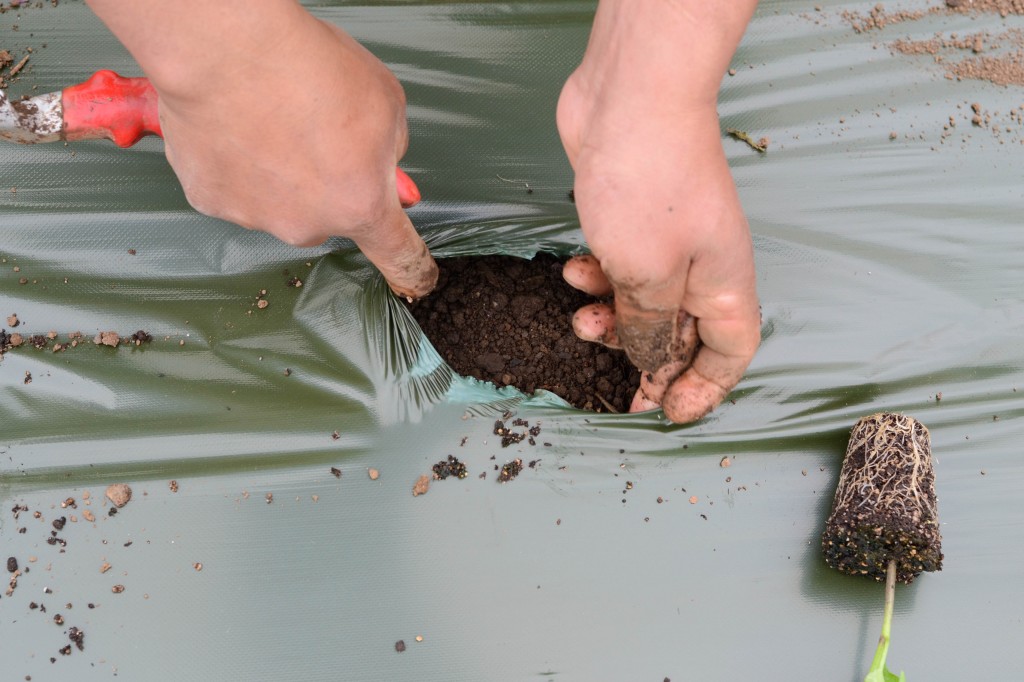 He pushed the drip irrigation tape toward the middle of the bed, so it will stay close but not too close to the plant. 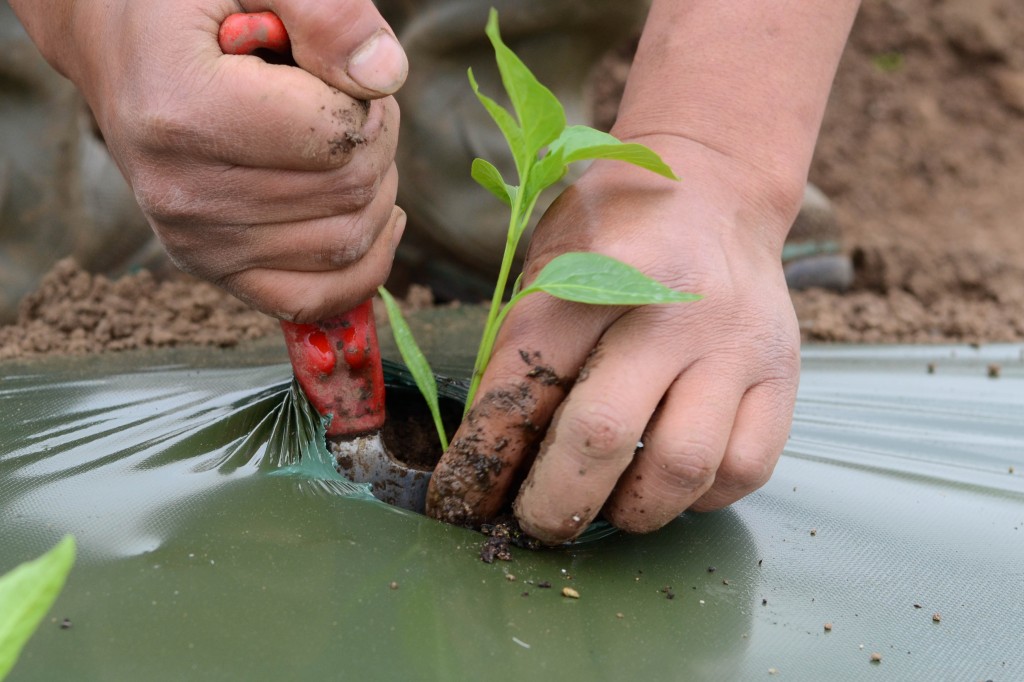 He plunged a trowel into the soil and pulled it forward to create a hole for the plug to fit into. 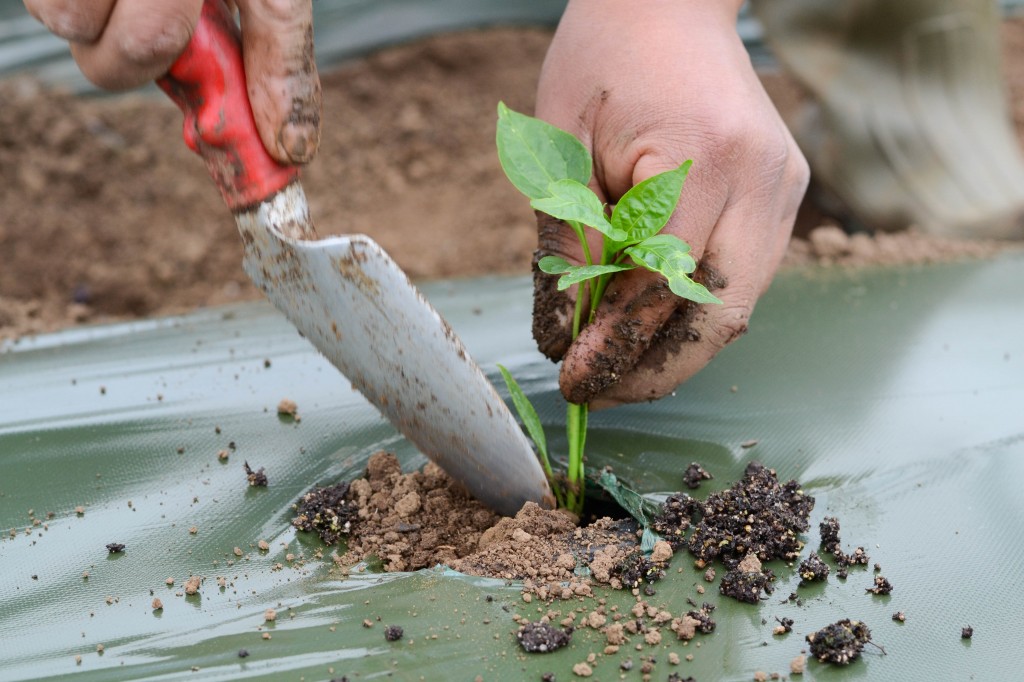 He pulled out the trowel and then used an additional scoop of soil to fill in around the plant. 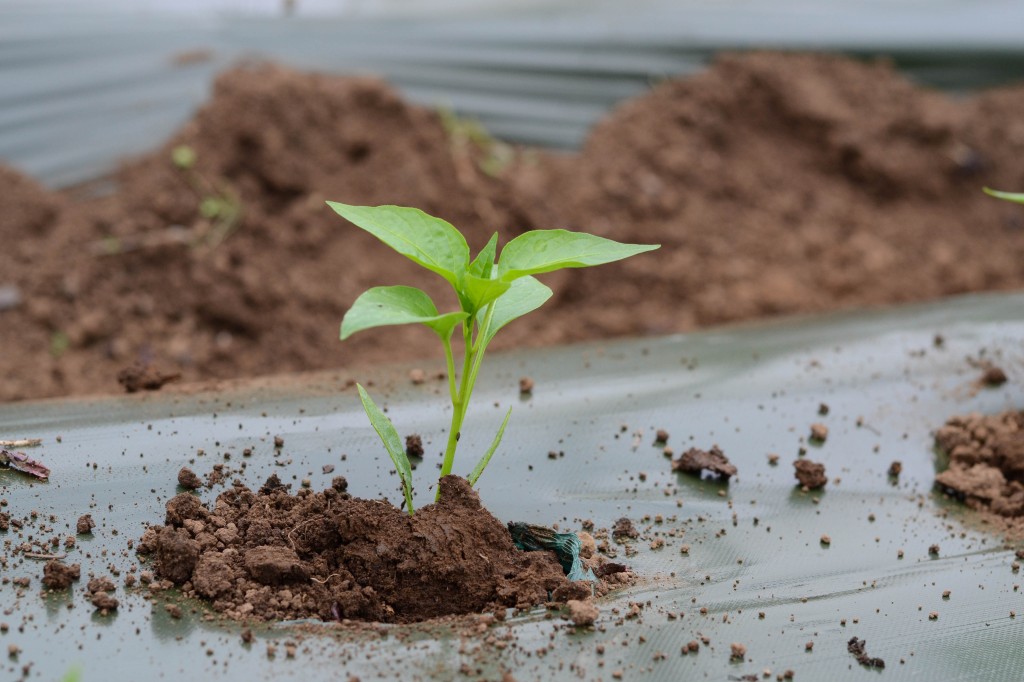 Speed and efficiency are important in the planting process, but each plant must get a good start in the ground in order to yield well later. 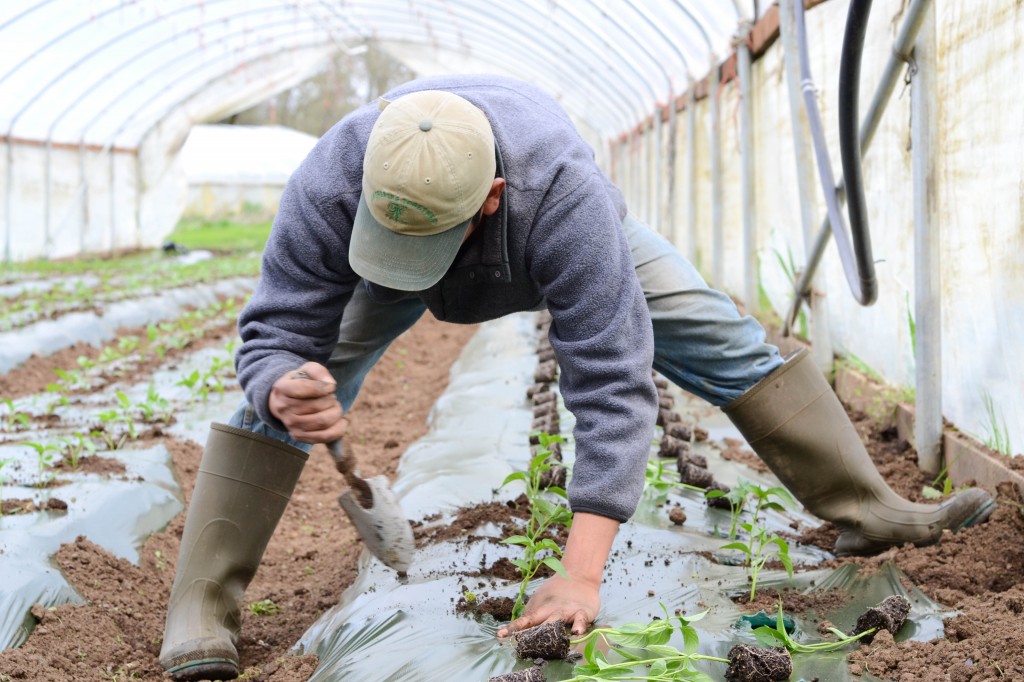 Planting each pepper takes less than a minute, but hundreds of peppers fit in one greenhouse and thousands (millions?) of vegetable and fruit starts are transplanted into the ground each year, so it adds up to a very large number of labor hours. 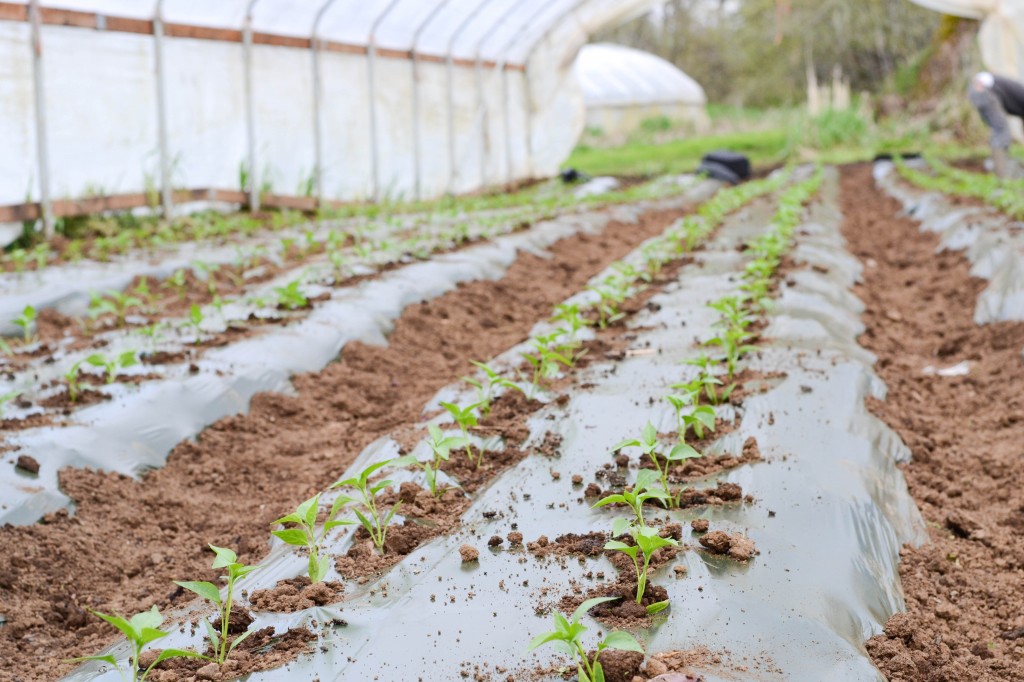 These jalapeños plants will hopefully bear a large amount of hot peppers, which will be sold wholesale to Organically Grown Company for distribution around the Northwest or to our friends at Sweet Creek Foods who will pickle them and sell jars of pickled peppers. 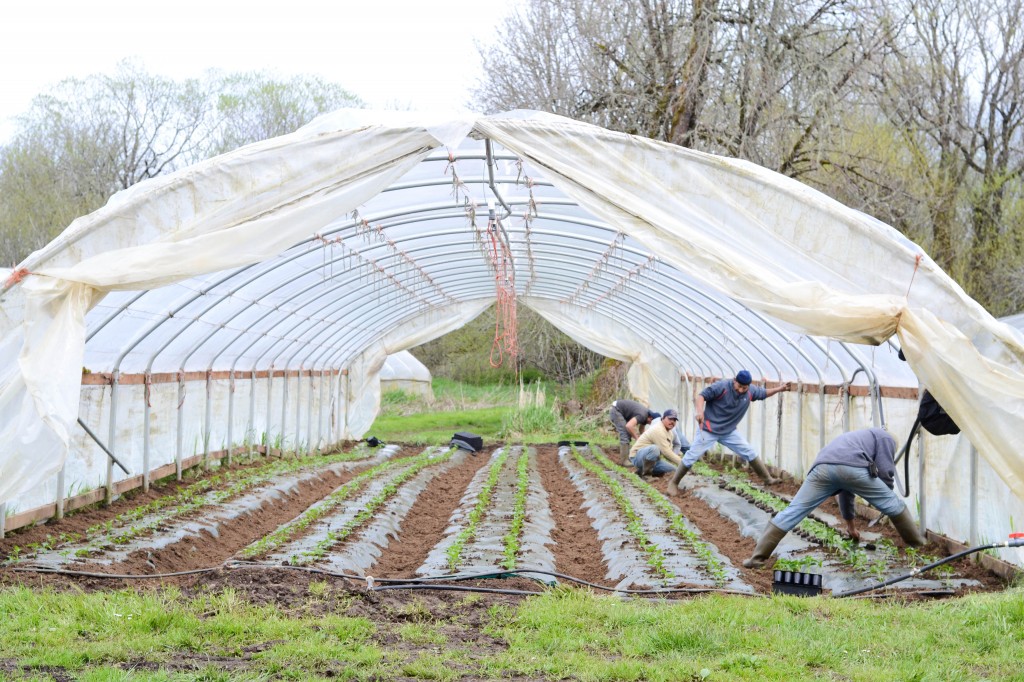 Peppers love heat, so after the crew finished up planting, they shut up the ends of the greenhouse. On sunny spring days, we open up the greenhouse ends for ventilation, but we close them up every night and leave them shut on cloudy days. 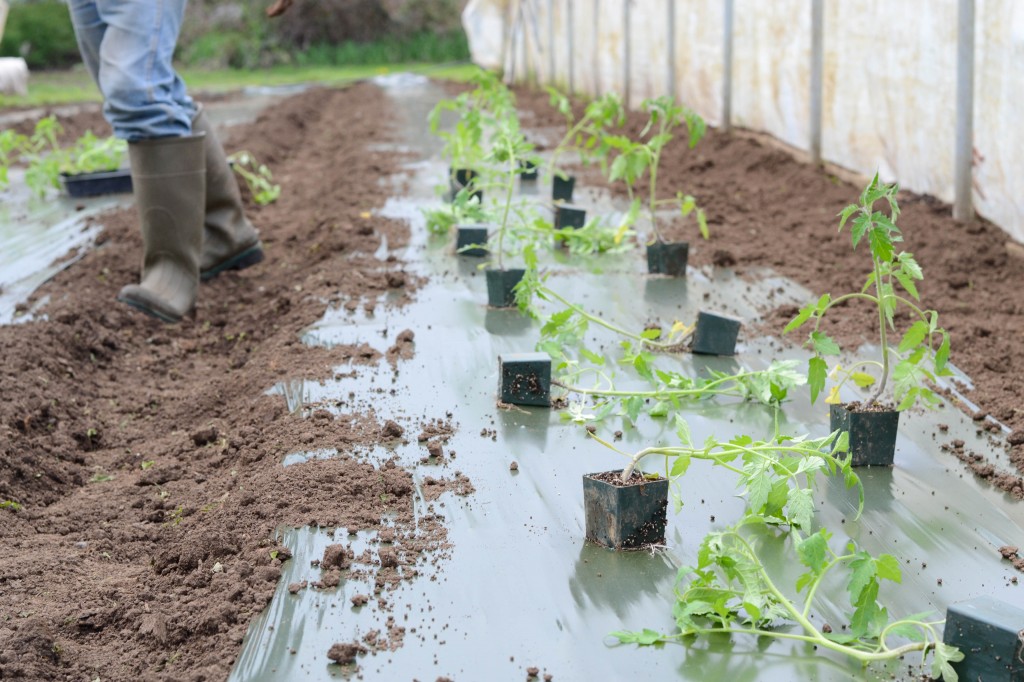 After planting all the hot peppers, the crew moved on to a neighboring greenhouse to plant tomatoes. This greenhouse got planted with two beds of red romas and two beds of yellow romas. 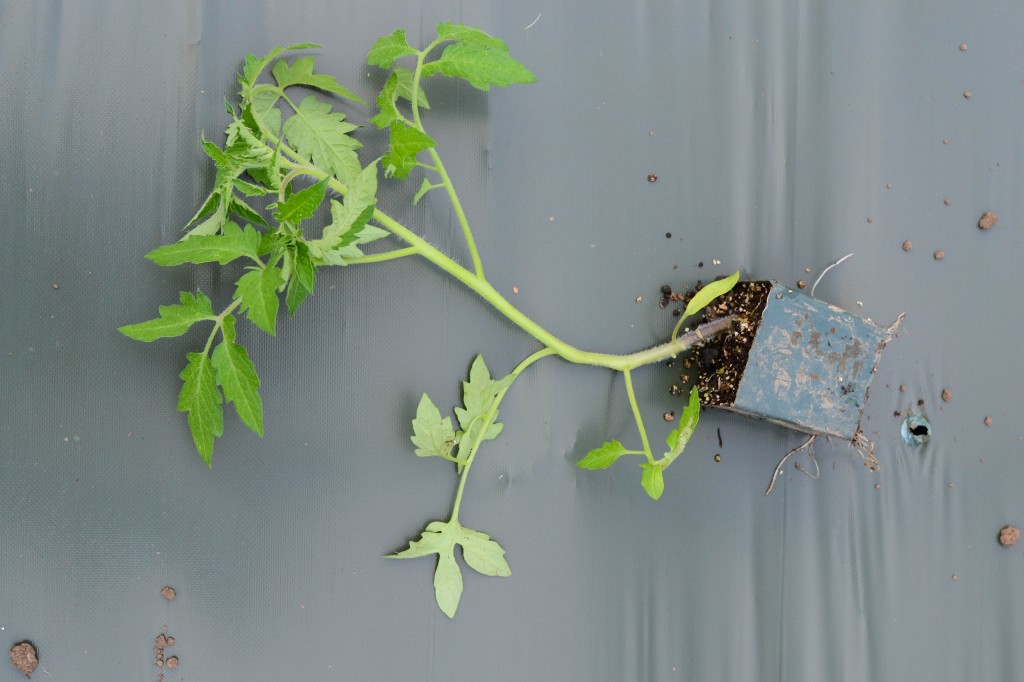 Like with the peppers, one crew member dropped a plant next to each hole. Indeterminate tomatoes such as these are spaced at three-foot intervals. 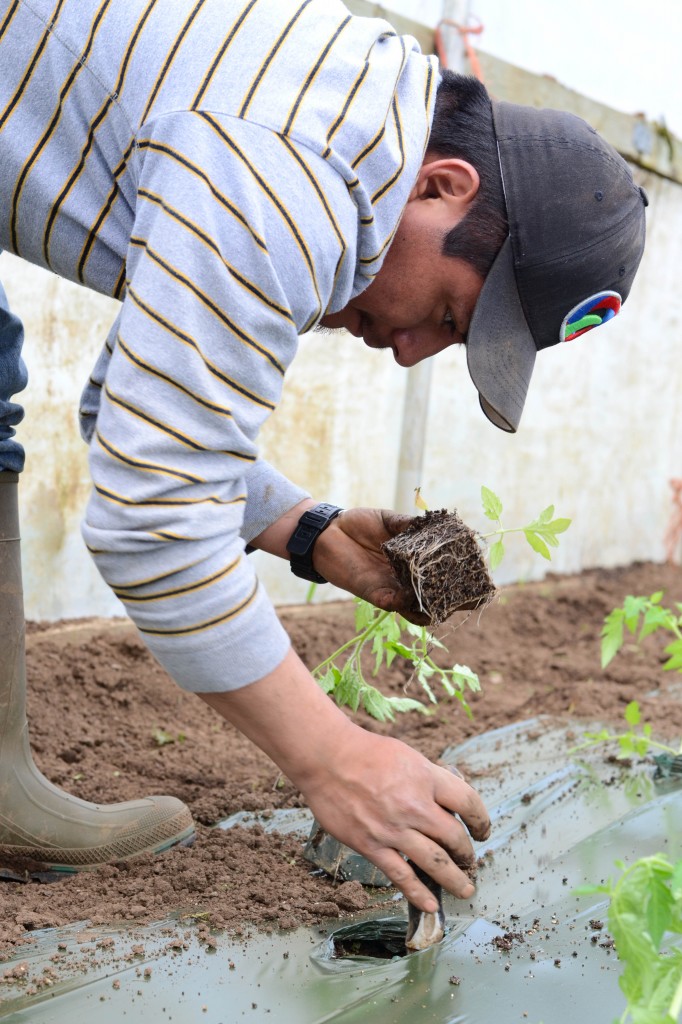 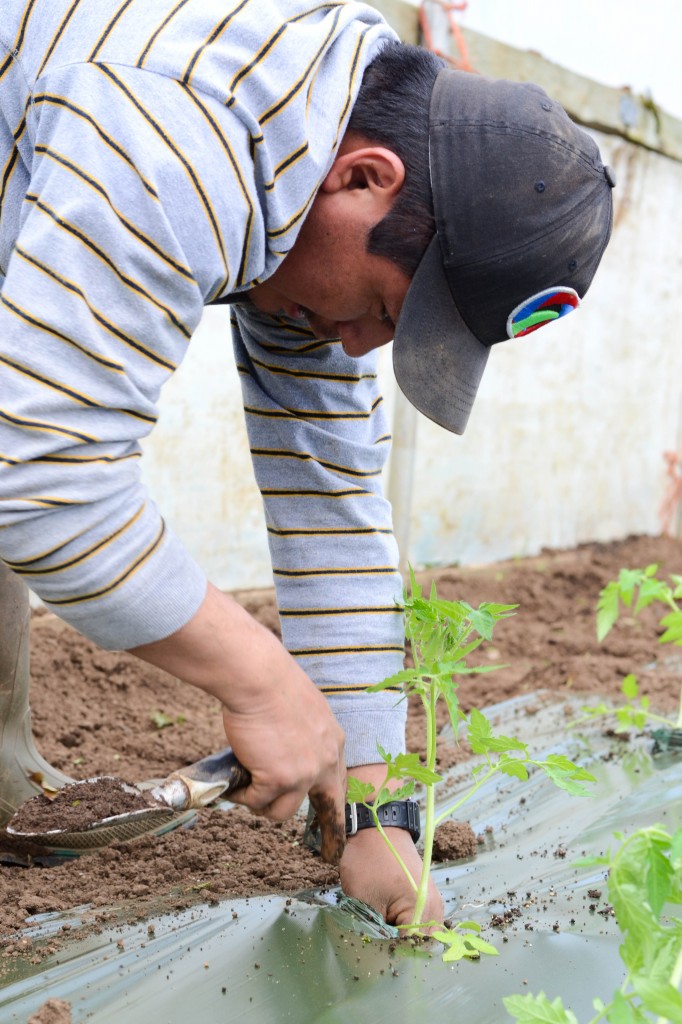 A planter (in this case, Macario) gouged his trowel in the ground, pulled the plant out of the pot, and placed it into the hole, making sure to keep the graft line on the stem above the soil. Because the graft is so low on the stem, the plants can’t be planted very deep, and the tall, lanky foliage is a little floppy. Later trellising will straighten the plants out. 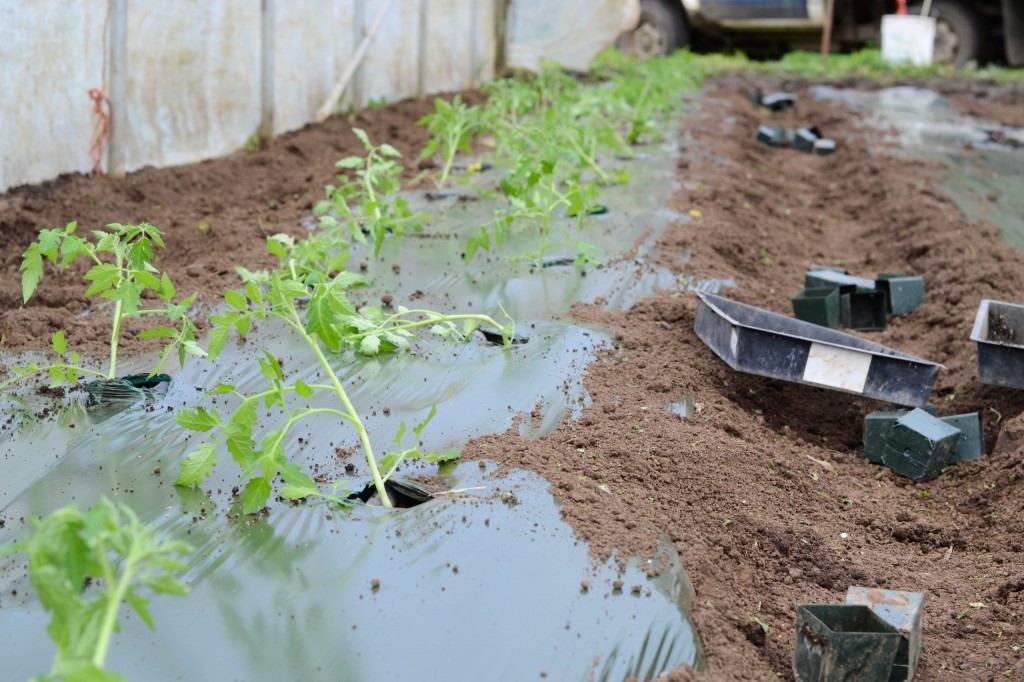 Planting tomatoes takes a little longer than planting peppers because they’re more fragile, and the crew members have to remove each start from a pot.

Hopefully, these pepper and tomato plants will begin to produce ripe fruit by July.

For more info on which varieties of peppers and tomatoes Gathering Together Farm has planted this year, read more here (peppers) and here (tomatoes).