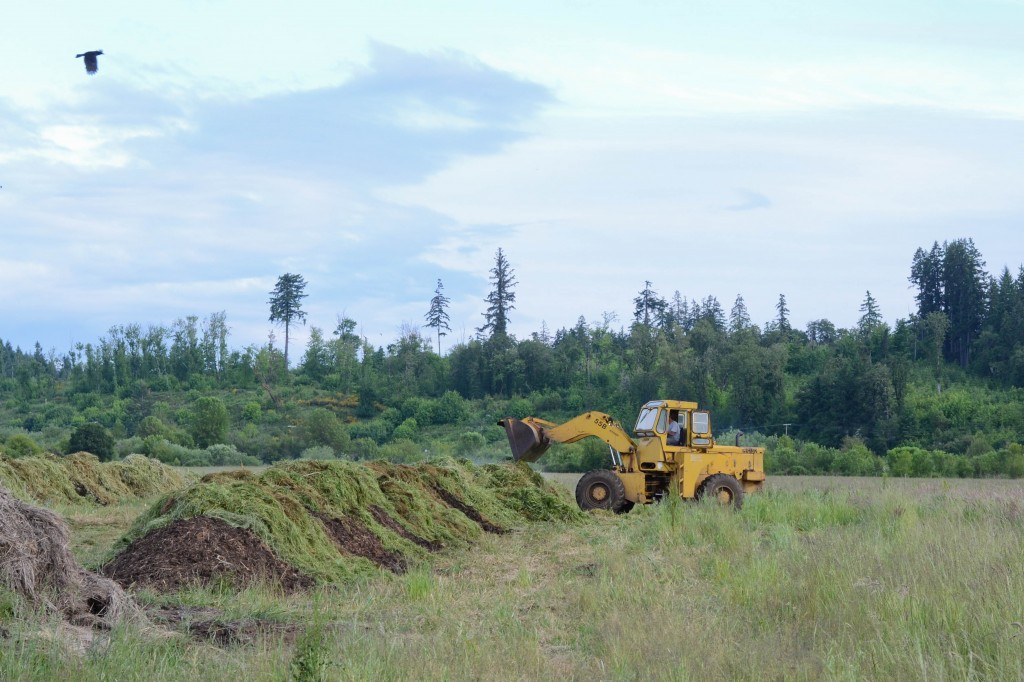 Healthy soil is at the heart of any organic farming operation. Because the use of chemical fertilizers are specifically prohibited on certified organic ground, organic farmers must maintain soil fertility by adding nutrients in the form of compost and other soil amendments. Though it may not be the easiest or even cheapest option, Gathering Together Farm has a large, involved program that makes enough compost on-farm for the vast majority of our fertility needs. 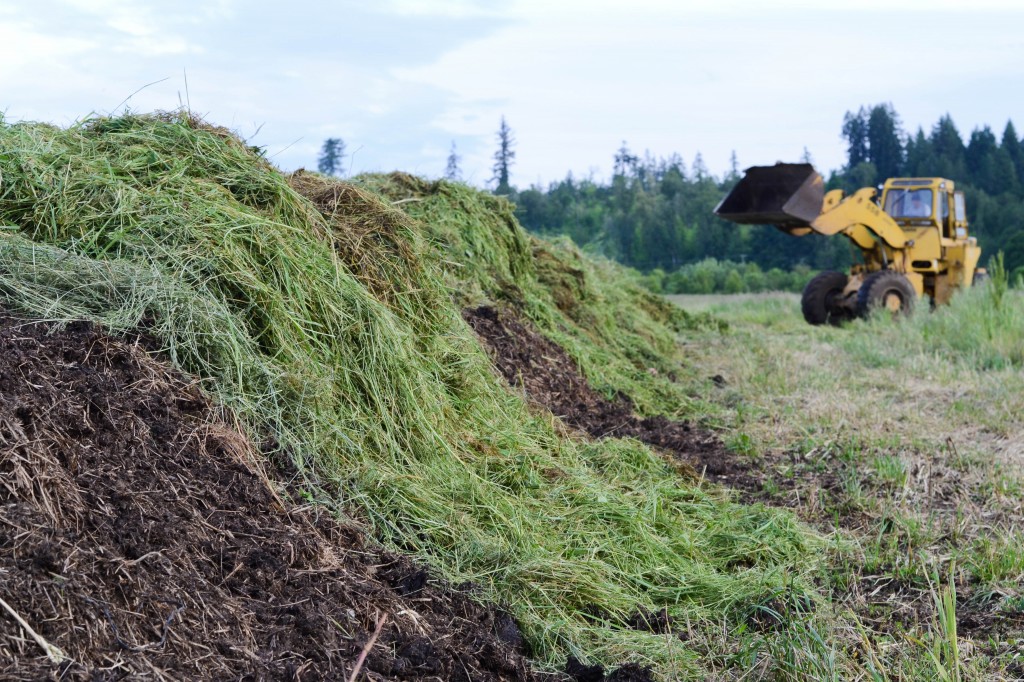 The bulk of our farm-made compost is composed of animal manure (horse, cow, alpaca, rabbit, pig, chicken), hay, straw, vegetative farm waste/green chop, and leaves. John Eveland (GTF co-owner) uses his long-standing relations with other local farmers to procure as much feedstock (material to be composted) as possible. Much of the animal manure originates literally across the street from GTF, and even the most remote feedstock sources are within a 10-mile radius of the farm’s home base.

Many of the feedstocks are free or cheap (though they must be loaded up and trucked back to the farm). Some compostable materials, particularly chicken manure, are quite expensive. Ten years ago, John could buy a truckload of chicken manure for $25, but today he pays over $350 per load. The price has risen so dramatically because some farmers who traditionally used chemical fertilizers have turned to manure as a source of nutrients as the price of conventional forms of nitrogen have fluctuated. Chicken manure, as a commodity, is in high demand.

The vast majority of feedstocks used in our compost program do not come from certified organic operations because we simply could not obtain enough compostable material for our needs. That said, soil tests on our farm have consistently shown no or very low levels of chemical compounds, putting us well within the standards for organic production and actually with lower background levels of chemicals than most organic farms.  Fortunately, the land that we farm was never a target for heavy pesticide or chemical fertilizer use in the past because it was mainly used for pasture or hay before we started growing vegetables. Unfortunately, that ground was fairly nutrient poor when we started to work it intensively, so it has easily absorbed large amounts of organic compost, and we’re still working on making the land more productive by adding more nutrients. 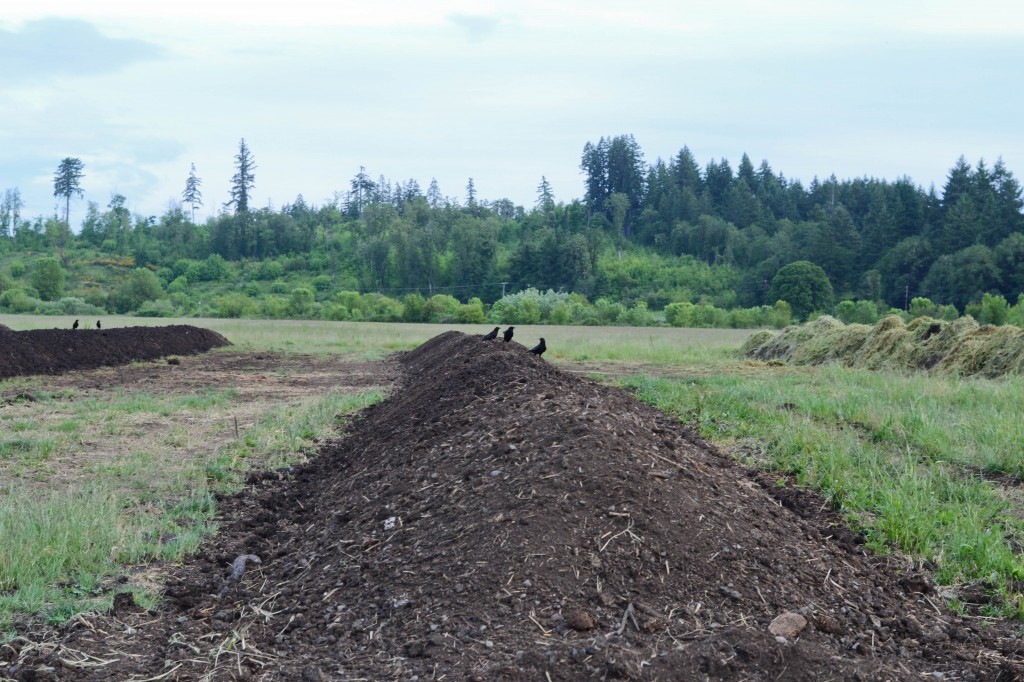 As we intensively farm in this area, we export large amounts of nitrogen, phosphorus, and potassium off the farm in the form of fruits and vegetables. Even though we employ many organic practices aimed at maintaining soil fertility (cover cropping, appropriate irrigation to reduce leaching, crop rotation, etc.), we need to consistently replace the nutrients lost by adding compost to the soil. 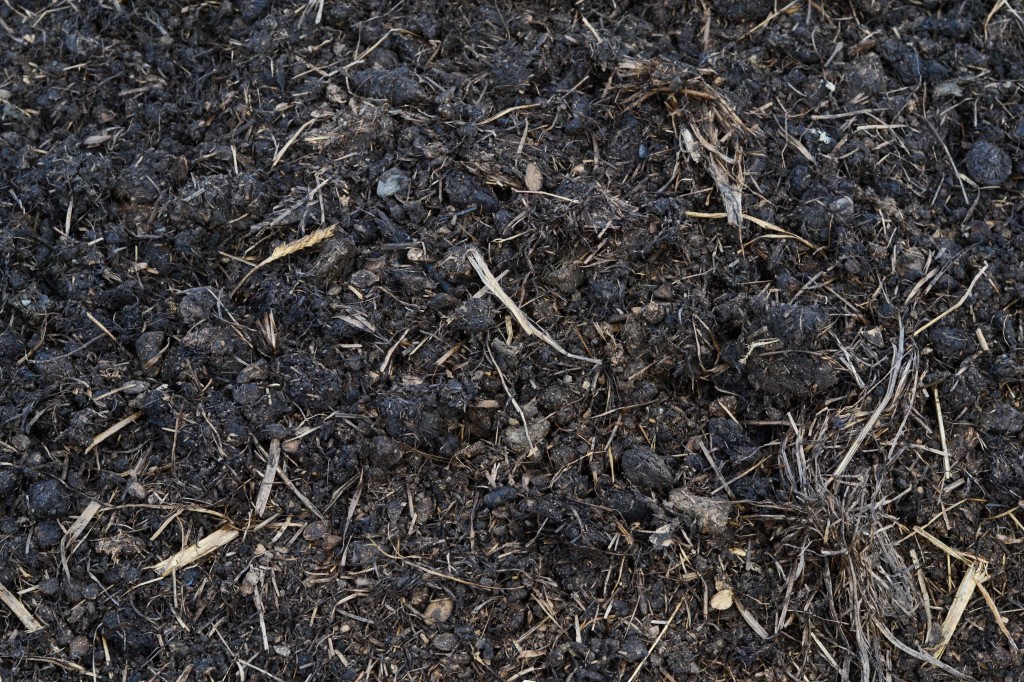 We produce three different grades of compost for three different purposes. Our standard mix includes animal manures, hay or straw, and other vegetative materials. We apply this product every time we prep a field for planting, and it’s a general all-purpose nutrient booster. The main component in our greenhouse potting soil mix (recipe here) is a blend of composted rabbit manure and leaves (obtained from the city street leaf pickup program). Lastly, we lightly compost chicken manure (meeting but not exceeding organic compost standards) for a high-nitrogen soil additive that is applied during field prep to crops that need extra nitrogen like melons, cucumbers, sweet corn, onions, peppers, and tomatoes. Sometimes we top dress crops with more of this chicken-manure based compost as the plants are growing.

Chicken manure is the most nitrogen rich of the feedstocks we use in our compost, and it has the most stored potential energy to heat up compost piles. Chicken manure is added to composting feedstocks after all the other materials are starting to break down and warm up, and the compost tender mixes in just enough to bring the piles up to temperatures that meet organic composting standards. 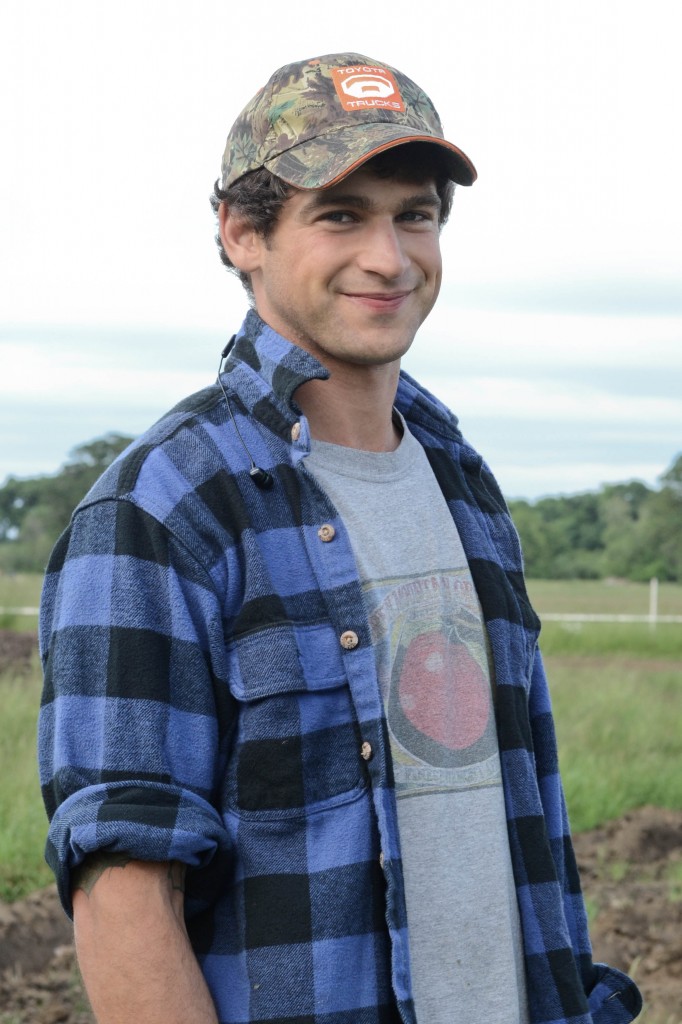 John has been personally responsible for the majority of the compost program from the farm’s inception until recently. He has always enjoyed his hands-on efforts in the composting yard, but being the owner of the farm pulls him in many different directions and finding time to devote to regular compost turning has proven harder and harder. This year, Dan (above) has taken over most of the day to day compost duties. Dan has some composting experience from previous jobs, and he brings a new passion and focus to the task. (I caught up with Dan to take these photos around 7:00 PM after he had already driven a truck up to Portland, worked the Saturday market booth, packed up, driven home, and unloaded the truck.) 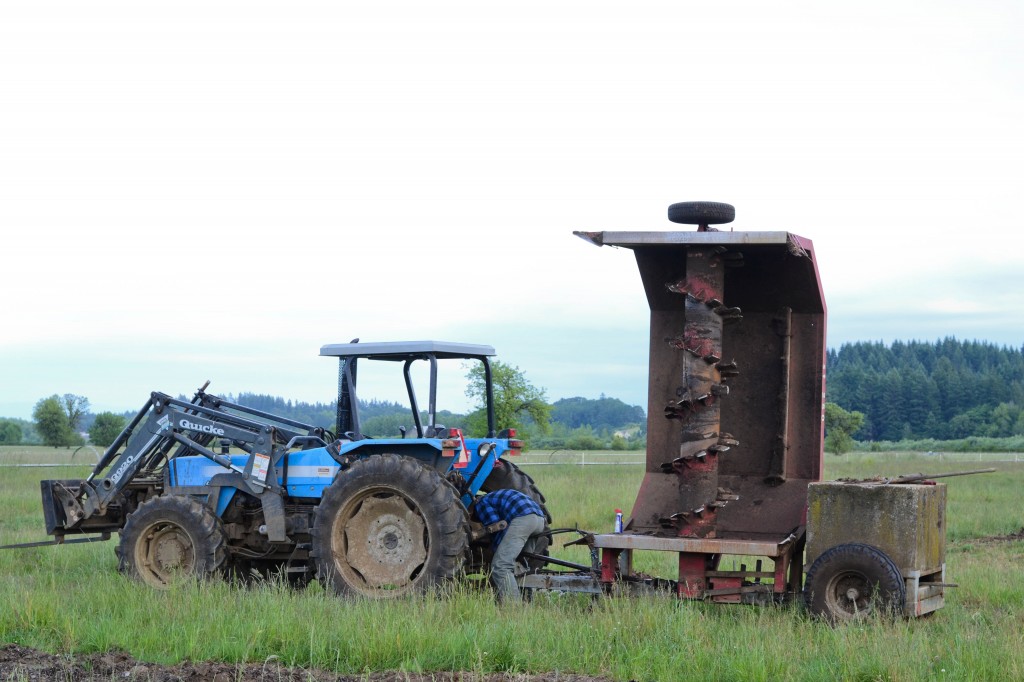 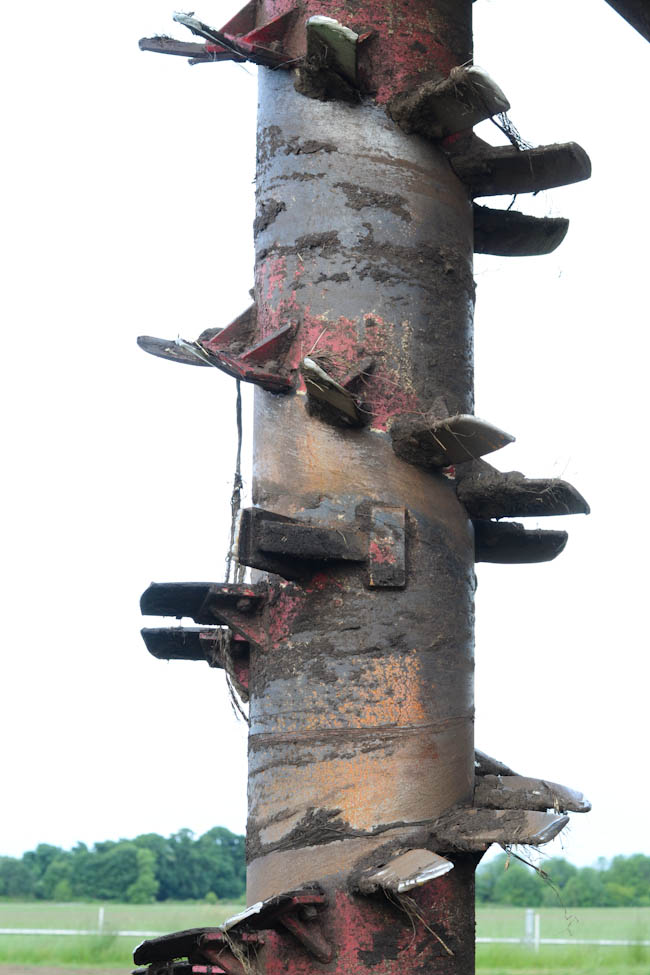 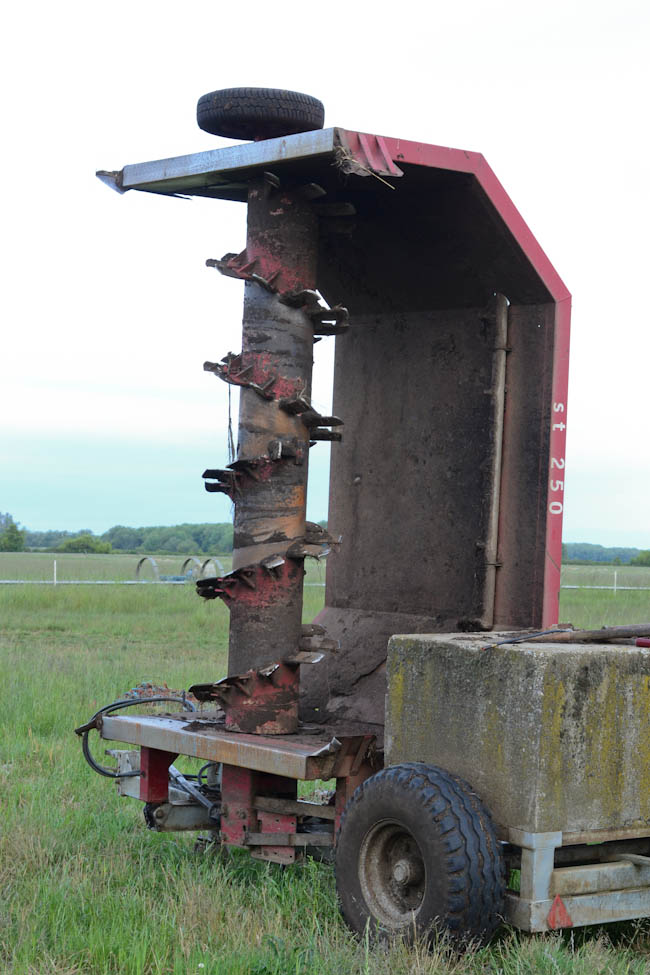 Gathering Together Farm, John in particular, is notorious for purchasing used (sometimes antiquated) equipment that needs a fair bit of tinkering to stay in service. About 10 years ago, however, John special ordered the compost turner and had it shipped from a factory in Austria because there was no decent equivalent available in the United States. The Sanberger 5000 has a rotating drum fitted with specially designed, hardened paddles and a 5,000-pound block of concrete in the back to keep it stable. 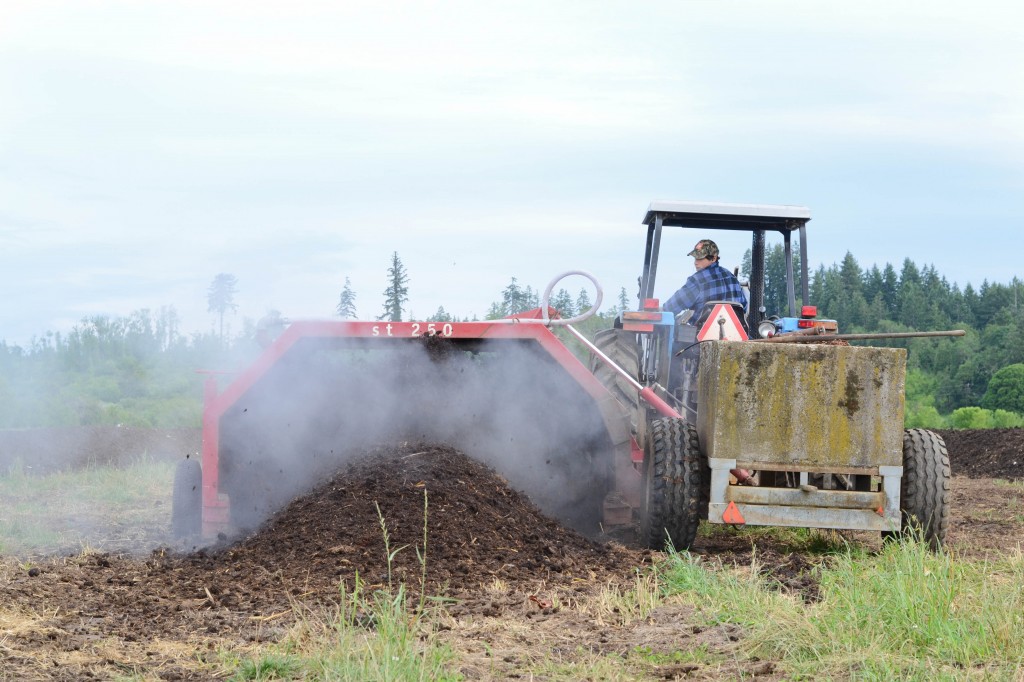 Obviously, there is a health and safety concern when dealing with animal manure in proximity to food crops. In 2002, NRCS, EPA, and USDA finalized organic composting standards to ensure that pathogens are eliminated before the end product comes into contact with food. Compost must be turned at least 5 times in 15 days, and it must maintain a temperature of 130-170° during that time. While these standards were developed with food safety as a primary concern, the same methods will also sterilize weed seeds and cook out the vast majority of residual chemicals in the feed stocks such as antibiotics, pesticides, and fertilizers. Raising the compost temperatures too high, however, will kill off the beneficial bacteria needed to break down the organic materials, so the compost tenders pay careful attention to air/water/nutrient balance to maintain temperatures within the ideal range. 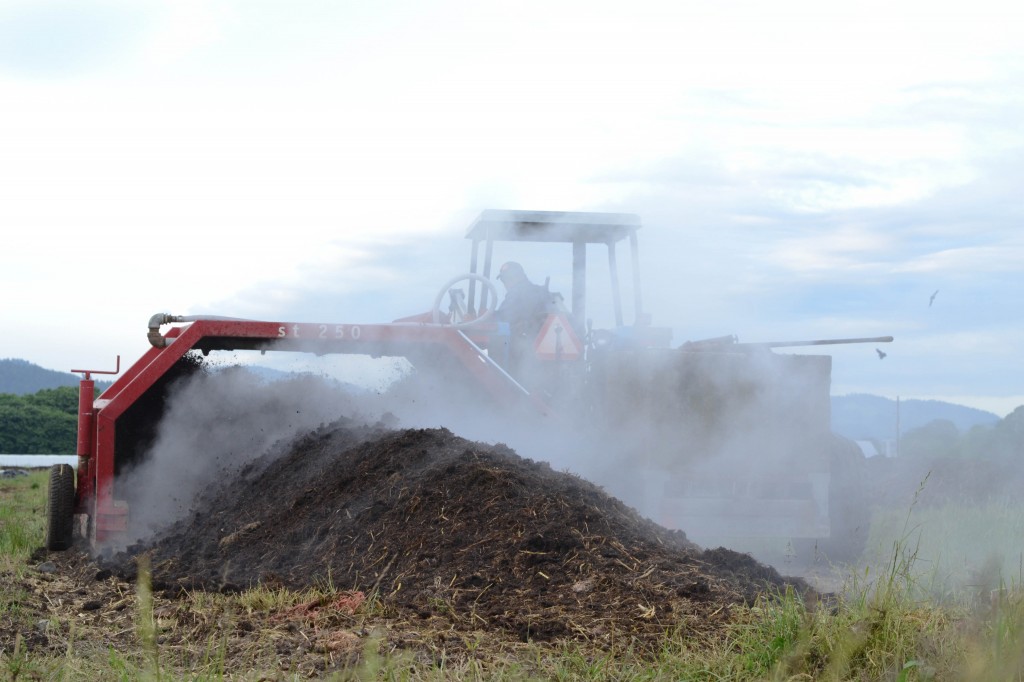 Dan will turn compost every other day for three or four weeks straight until the piles reach (or surpass) the mandated temperature and time standards. After that, he’ll turn the windrows about once a week to keep them active. After the composting process is complete, the final product will be piled up until it’s needed. We are currently using up what’s left of the compost produced in 2011, and the piles we’re working on now will probably not be spread on fields until next spring. 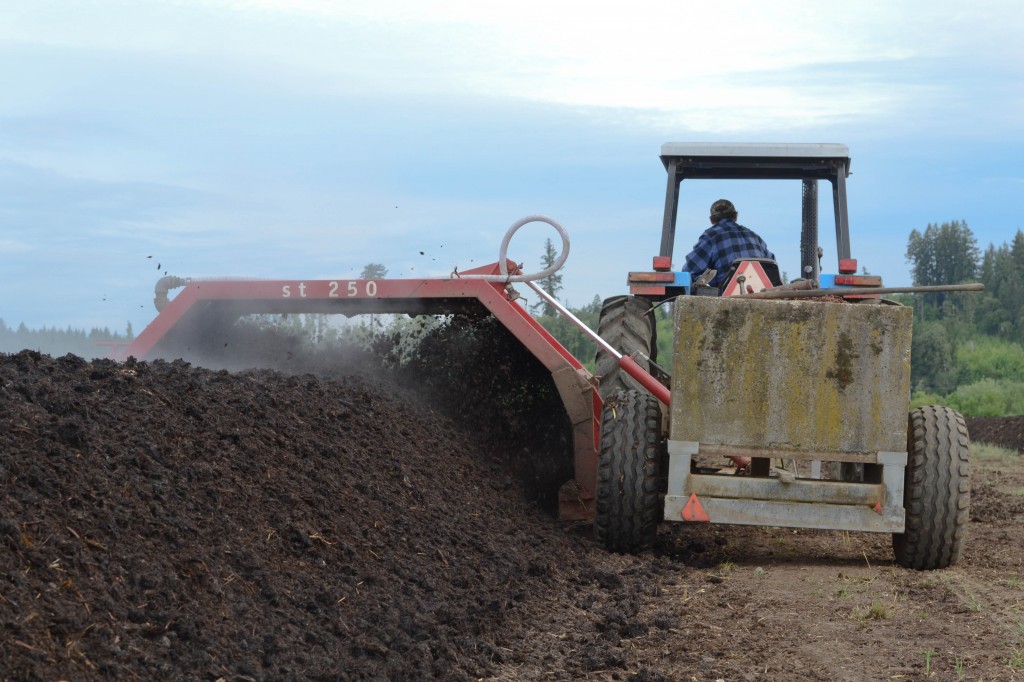 Dan drives the tractor at a snail’s pace alongside the linear piles of compost while the paddles of the compost turner aerate the material and re-mound it into nice, neat windrows. 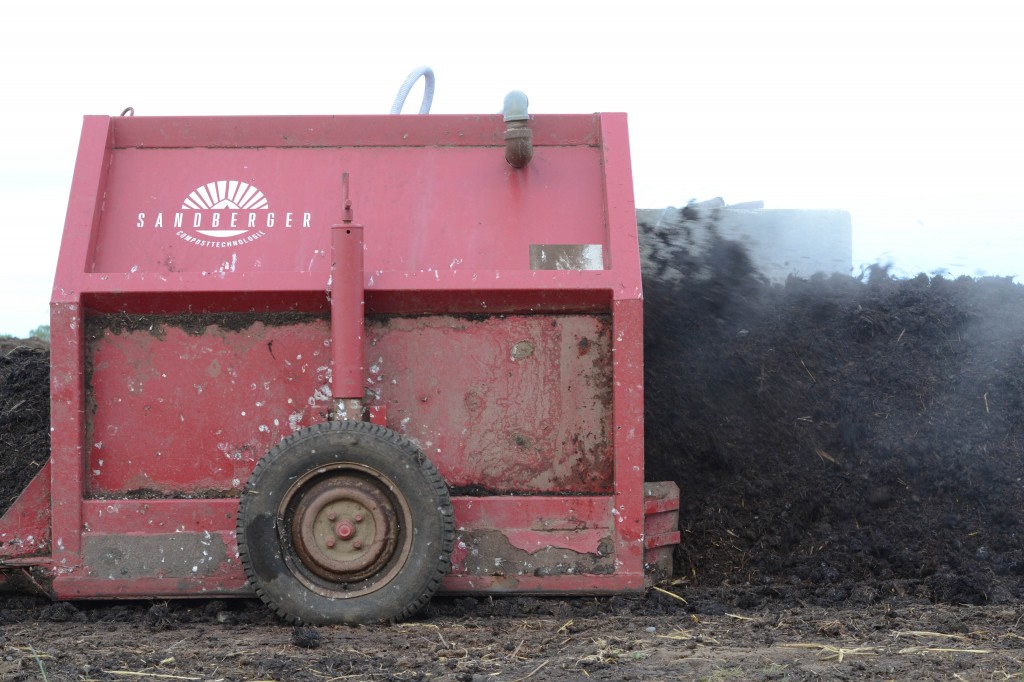 Adding air and mixing compost activates the decomposition-inducing bacteria, releasing energy in the form of heat. As John says, “You could fry an egg in there.” 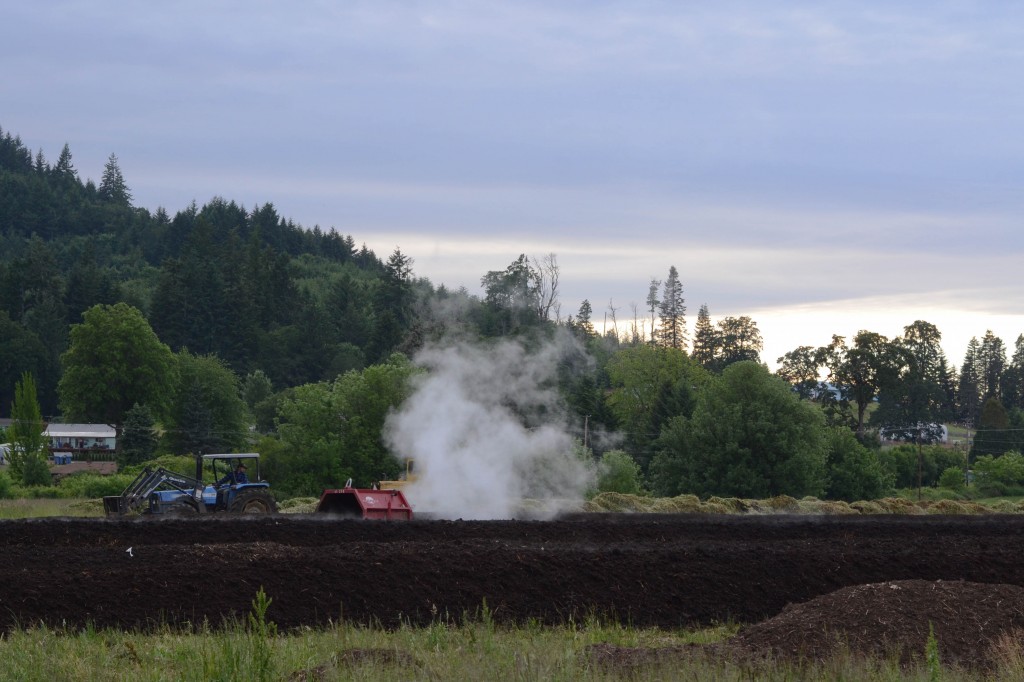 Water is also an important element in the composting process. As the piles heat up, they get seriously steamy. The piles that Dan is working on now are quite moist after winter and spring rains, so there’s been no need to add extra water.

In a couple months, we’ll gather a new batch of feed stocks and begin the composting process again. Those materials will be quite dry at the end of the summer, so Dan will need to add water to activate decomposition. The compost turner is designed to be fitted with a large water tank that can spray water directly into the windrows as the piles are turned. 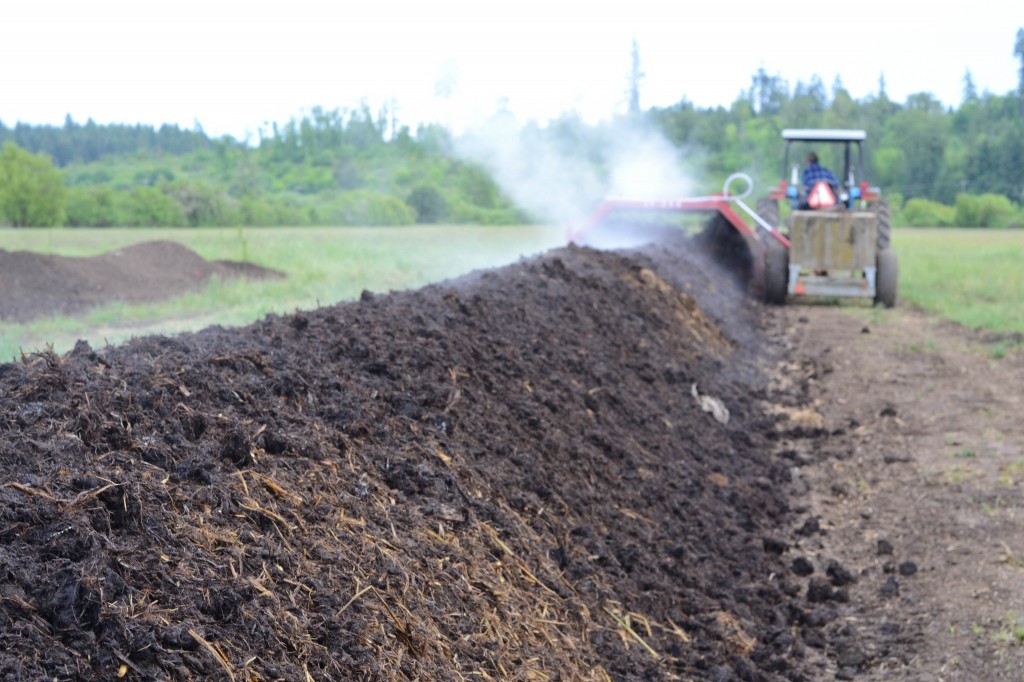 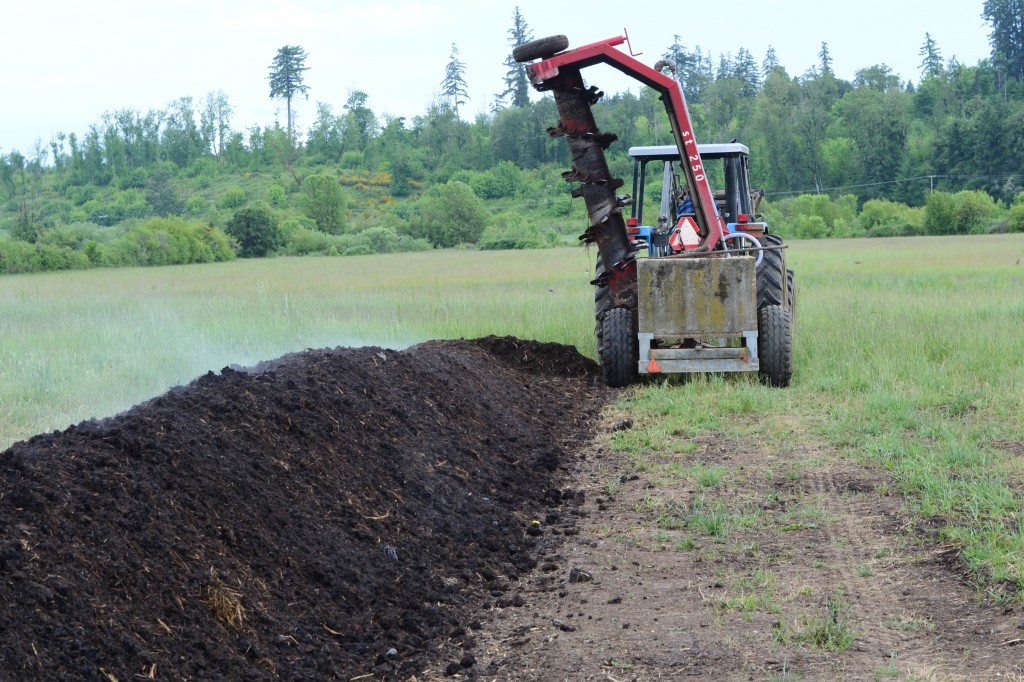 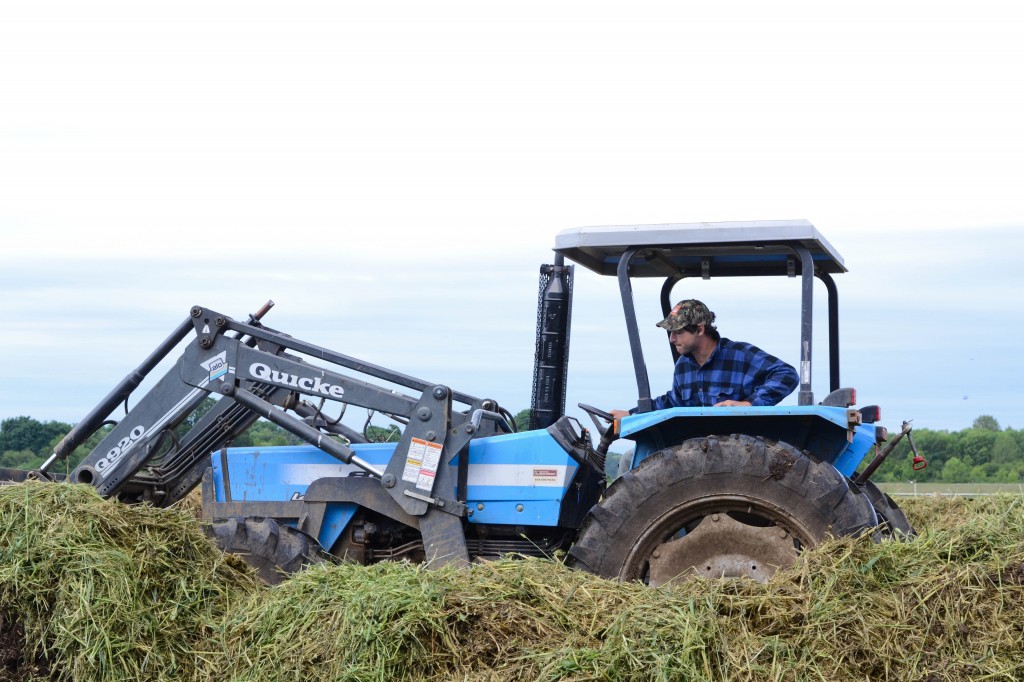 Turning compost is a slow and somewhat monotonous job, but the compost tender must be actively paying attention to the task at hand, making sure that the rows stay straight, and the turner isn’t getting plugged up. 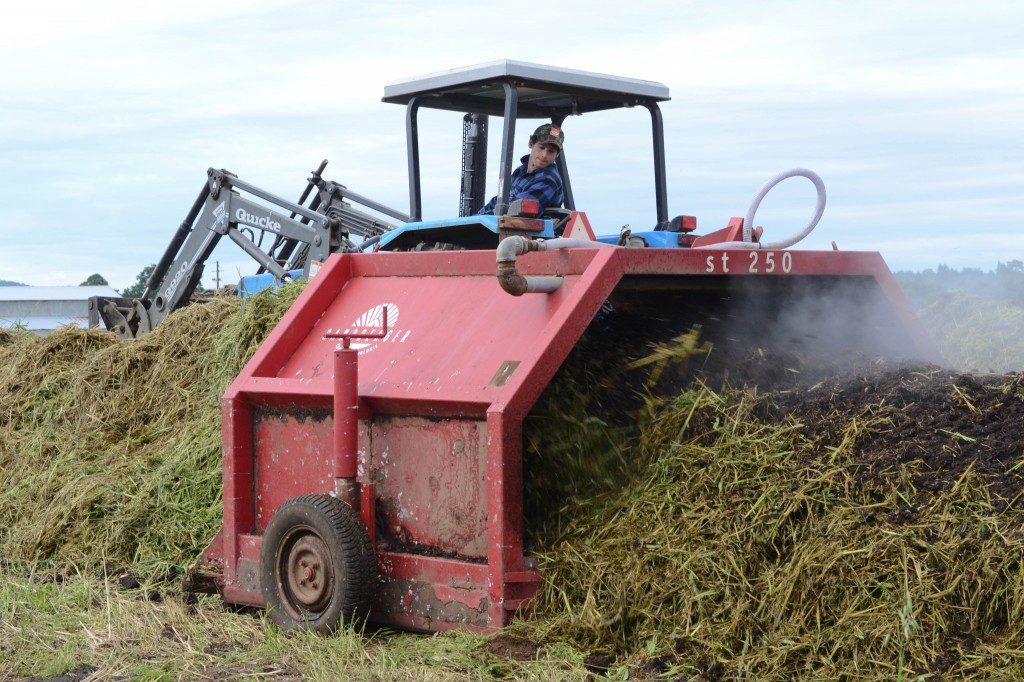 Though it’s not always pretty to think about where the nutrients that produce organic fruits and vegetables come from, the reality of farming is that we’re part of a complex ecosystem, part natural and part human constructed. Compost is the reason we’re able to keep producing such good stuff.