One of our employees, Amy Garrett, also works for the OSU Extension Small Farms Program. With a project funded in part by National Institutes of Food and Agriculture under the Beginning Farmer and Rancher Development Program, she is using some of GTF’s land to do a dry farming trial. How is such a feat possible? Dry farming has existed for a long time and was the main form of farming before modern irrigation systems, the rise of dams, and aquifer pumping. 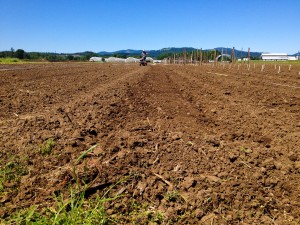 After last year’s drought, more and more people became interested in the dry farming techniques, as it seems evident that warmer summers and less snow pack are going to continue. Last year, GTF had its water rights cut off in September, even with senior water rights. Other farms had theirs cut off in June or July. If this happens again, it will be helpful to have methods of farming that don’t require irrigation.

In her little plot of land, Amy is planting melons, tomatoes, squash, and potatoes. These will be grown all summer without irrigation. First, she plants everything a little deeper since the plants rely on moisture in the soil. The seeds are planted 4 to 5 inches down. 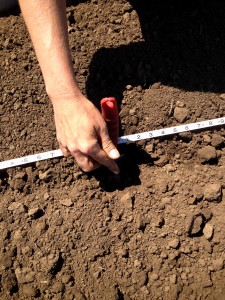 After covering the seed with soil, Amy uses her boot to push down on top of the soil to bring the moisture to the surface and create capillary action. If the roots can extend down three feet, they’ll reach groundwater. She uses wider spacing between each seed so they won’t compete as much with each other for water. Fortunately, the roots of dry farmed crops grow deeper than irrigated crops. The roots of tomato plants can stretch as deep as 5 or 6 feet. 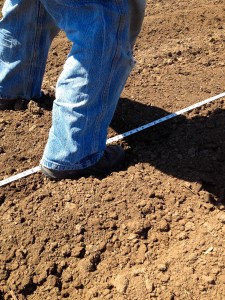 This isn’t a yield-maximization strategy, but dry farming has been known to produce more flavorful produce that people often seek out. This year, the early adopters of dry farming in Oregon are getting together to do research and develop best practices. Small farmers in Western Oregon have created a collaborative learning community with a Facebook page called Dry Farming Collaborative.

Amy first got a taste of dry farming when she went around and visited small farmers in northern California and Oregon. One farmer in particular has been dry farming  in Oregon for over 40 years and was the one who inspired her to look more in depth at dry farming methods.

At this point, Early Girl and Big Beef tomatoes are the only plants that have leaves above ground at GTF. 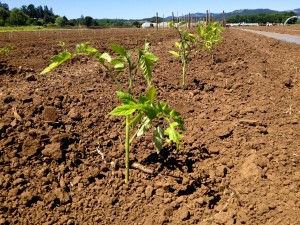 All of the crops and varieties are ones that have been successfully dry farmed or came from dry farming systems (like Seed Revolution Now). Two of the potato varieties that Amy is planting, Purple Majesty and Mountain Rose, are also grown by GTF (irrigated), so it will be interesting to compare the dry versions with the irrigated versions. It is believed that dry farmed potatoes store longer than irrigated. The other two potato varieties being dry farmed are Yukon Gold and Nicola. Amy says it would be fun to have a dry farm themed dinner featuring dry farmed produce and do side-by-side tastings of dry farmed and irrigated produce.

If it rains, Amy will come out to cultivate. She says it is important to keep the top layer loose, which acts as a mulch. Crusting and cracking in the soil accelerate moisture loss, so loosening the top few inches will help to conserve the moisture below. Other than that, she actually doesn’t need to tend the plot very often. Since there is no irrigation, fewer weeds will grow. 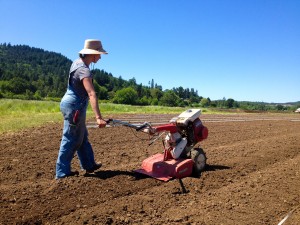 We look forward to watching this process unfold throughout the summer, and we will do monthly blog posts documenting the progress of these dry farmed crops. Stay tuned.