Oh my gourd, yesterday was blazing. We sprayed our vegetables and our employees with produce misters in the record-breaking heat. After cooking up a plate of fava beans, I quickly decided it was much too hot to be working with a flame. As a result, we have two new recipes featuring all raw ingredients. 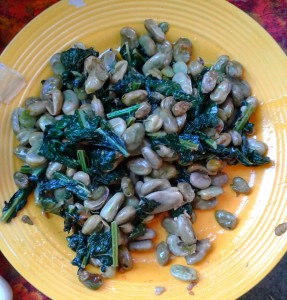 FRESH KOHLRABI WITH LEMON AND SALT: 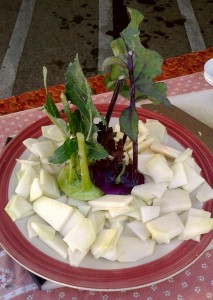 Kohlrabi is unique in that it’s the enlarged stem, as the vegetable grows on top of the soil. Their flavor and texture is similar to our Hakurei salad turnips, though kohlrabi has its own unique crunch and sweetness. During early parts of the season, the outer skin can be eaten with ease, though they can get tough enough that you may want to peel. Customers at market went crazy over these yesterday, I could barely chop faster than they were being eaten. 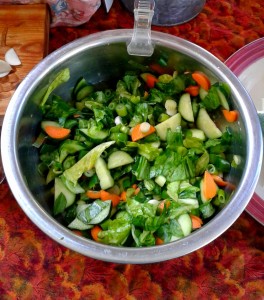 The goal of this recipe is to celebrate the raw produce that we have in season right now, which I attempted to achieve by mixing together a variety of flavors and textures. My usual oil-vinegar combination is olive oil and balsamic vinegar, but the folks sampling produce up at our Portland markets often use sesame oil and rice vinegar instead, so I decided to try something new. The flavor combination ended up balancing out really well, I’ll definitely be making this again at home. Feel free to throw some other random veggies in, such as kohlrabi or cilantro. Any variation will be delicious!