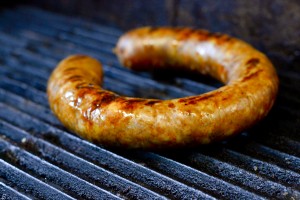 It’s that time of year when we like to feature some of our local vintners, meat suppliers, specific regions, and special items created at the farm. Starting us off  is our neighbor, Mosaic Farms. Just up the road from GTF, Mosaic Farms provides us with as local, sustainable, and delicious pig meat as we can get. The farm’s owner and operator, our friend Chris Hansen, describes his holistic farming practices in this video, where you also get a chance to see his pigs roaming in their happy home.

During the first half of May, JC has hams and shoulders, which he will embellish our daily menus with. His grand plan includes the following:

Back in 2012, chef JC broke down a whole pig for a similar special feature – check out the entire process documented at our Flickr photo set here. Below is one of those photos. Fair warning: we believe people should know what their food looks like at all stages, however some of the images are graphic. 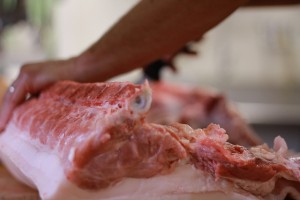 The moral of the story is this: if you like pork even 1% as much as JC does, you’ll want to make a special trip out to the GTF Farmstand in early May to try out these mouth-watering morsels.

I can’t help it…making sausage is so satisfying to the craftsman in me. A well-made sausage is a rare (although simple) thing. Making sausage jumps to the next level when the casing is long and true. I fit the whole pork butt worth of sausage in one casing. There is something truly economical/efficient about it. I think the sausage will be grilled on the lunch menu with braised cabbage and an altamura bread gratinata.